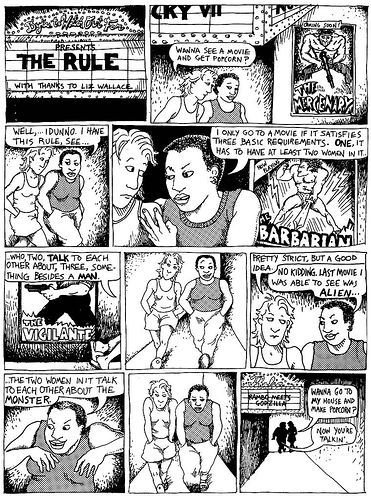 Nobody likes a test on a Monday, but we reckon you need to do this one.

Think of your favourite movie:

1. Does it have at least two women in it?

2. Do they talk to each other?

3. If so, do they talk about something besides a man?

The Bechdel test was popularized by Alison Bechdel’s comic Dykes to Watch Out For, in a 1985 strip called The Rule. We think it’s pretty alarming how few films pass the test, from the entire Lord of the Rings trilogy, to The Social Network and The Artist.

5 thoughts on “The Bechdel Test”