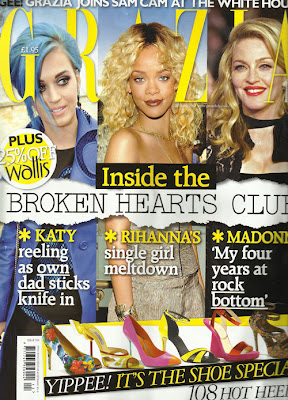 Grazia is constantly throwing shit and some of it is sticking. Increasingly, a woman’s role in society is to duck and dive from these shitbombs on a weekly basis. They’re coming in thick and fast. This week’s issue was a veritable monsoon of excrement.

We kick off with “INSIDE THE BROKEN HEARTS CLUB”. A private members’ club of three not dissimilar to Soho House, the Broken Hearts Club, according to the Grazi administration, consists of Katy (Perry), Rihanna, and Madonna, all of whom are single and seemingly not loving it. Because no one at Grazia HQ is single and loving it, remember? A good husband is not only mandatory for a successful career but also for your mental health (see: “Rihanna’s Single Girl Meltdown.) Here Grazia have to do some furious back-peddling as it emerges that, actually, Rihanna ISN’T getting back together with her abusive ex-boyfriend, as was “widely reported” earlier this year (BY YOU, YOU TWATS! See: “WHY RIHANNA WHY?”) Basically, she’s damned if she does and damned if she doesn’t. As is Madonna, who’s decision to split from Guy is apparently “HER GREATEST FAILURE.” Funny, I would have said her God-awful rendition of American Pie was but what do I know?
If you are a regular reader of the Vagenda and are still under the impression that Grazia is kind to women, you should probably just leave now. They are all over this nervous breakdown stuff, they love it. Why else do you think that they are STILL pushing floral pyjamas as daywear? They want you to have one. And they want you to look like you’re having one too. But only if you’re single.
Other stuff in Grazia this week includes their exclusive visit to the White House with the Camerons. This is hilarious and will be the topic of another article so I am skipping it. Further along we have “ALL HAIL THE KING OF SOHO”, in which Grazia passes no judgement on Paul Raymond’s giant porn/strip club conglomerate, probably because he didn’t have a vagina (he just owned them.)
Later Grazia identifies a ridiculous “trend” in the form of the “shrug bug” which basically boils down to you putting your coat over your shoulders without putting your armies through the sleevies. I like to think of it as “the amputee look”. Remember, ladies, Grazis are not your friends. They want you to look like an twat in flowery trousers.
Then Polly Vernon gets started (Shut up, Polly. Just shut up.) According to Polly, her being bullied on twitter and followed around her local supermarket is WAY more important than street harassment. The following bit sounds quite sinister, until you realise that some internet commentator was just reporting back on the contents of her shopping basket. Most boring stalker ever. As a side note, I am surprised by Polly’s apparent predilection for chicken goujons, which, for someone who once proudly boasted in a national newspaper about being a size six seems somewhat incongruous. But yeah, everyone should feel really sorry for Polly. Being followed around Waitrose by some mumsnetter is JUST AS traumatic as being labelled a slut by a group of leering men in the street, if not more so. But to Polly, it’s just wolf-whistling: innocent, flattering wolf-whistling. Whilst being called stupid and ugly on twitter by someone behind a computer screen who poses no imminent threat should be made illegal. I ask you, why do these two separate, nasty phenomena have to picked against one another in competition? Is it too much to expect that women not be bullied at all?
We’ll wind down this week’s Grazia summary with writer Jane Mulkerrins’ piece: “WHY SETTLE FOR ONE MAN WHEN YOU CAN HAVE THREE?” Jane seems to be the only happily single woman on the pages of Grazia this week, but I am struggling to get on board with her multi-dating crusade, mainly because, were a man to have written this, all hell would have broken loose. Case in point, THIS QUOTE:
“In London, my well-honed “dating” methods were laser-guided missile attacks. I would identify my prey, track him at length- sometimes even years- then launch an assault, usually with enough alcohol to render him defenceless.”
I’m not sure Jane, but doesn’t this confession sound a little, well, rapey? I mean, if a man admitted that plying a woman with booze before pouncing on her was his well-honed pulling technique, I’m sure some angry feminists (me) would have something to say about that, hm?
In the US, however, “dating is more of a hobby, like shopping.” Vom. Jane decided to multi-date after some guy called Neil stopped calling her (Catharsis column alert!). “If one guy doesn’t call, you have other options.” Apparently, it is a “well-known scientific fact that you are more attractive when you’re not completely single.” WHERE ARE THE STATISTICS, JANE, WHERE ARE THEY?
So multi-dating is fun and liberating, says Jane. Unless the guy does it back to you, in which case it becomes “depressing.” Double standards, much? Of course, Jane isn’t actually shagging these men. She favours an “options-open, legs closed” approach. Which to me is baffling, because what is the point of multi-dating if you don’t get a single, solitary orgasm out of it? But I’m a total slapper, what do I know.
The article concludes with: “You can kiss as many boys as you want to, but generally wait until the third date to have sex.” Oh my GOD, Grandma! I had no idea that you had decamped from a sleepy town in the home counties to New York, to set up a nice little line in confessional women’s journalism. You could have at least written to tell me.
Except my Grandma is actually quite a bit more open-minded than Jane from Grazia. I have no ideas what her views on sex before the third date are, but considering the fact that she was a fifties housewife who had three kids before going off to get an Oxbridge degree, I suspect that her outlook on sexual politics are a lot more progressive than most of the Grazia editorial staff. And she would never, ever, go outside in pyjamas. Suck on that, Grazia. My Grandma is way cooler than you.

2 thoughts on “My Grandma is Cooler Than Grazia”