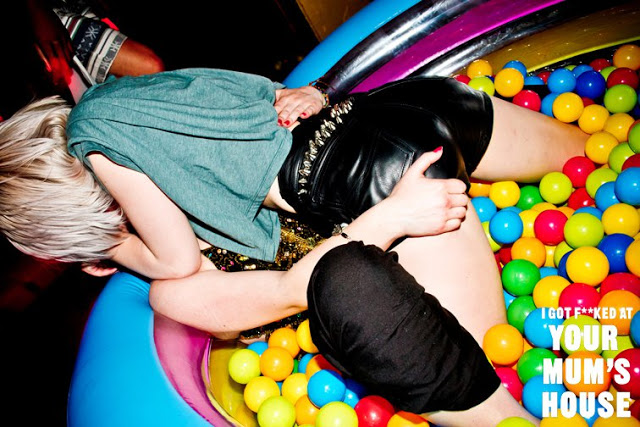 
We’ve all had some pretty terrible nights out in our time. Remember those ones where you spend hours queuing for some sub-standard club only to give up and wander the streets at 3am looking for the next watering hole, as your resolve to party as a verb fades to black? Or the ones where everyone disagrees about where to go and the group becomes fractured, with half heading to Sketch for its private members’ hipster vibe while the other ends up in Moonlighting on Greek Street snogging someone in a checked shirt up against its mirrored walls? You know what I’m saying.
I am going to tell you about our worst night out ever. We’re not talking Tiger Tiger bad- that’s just the West End. We’re not even talking ‘vomiting and crying at the same time while taxi drivers speed past your friend’s desperately waving hand’ bad- that’s just a Tuesday evening. No, this was the kind of shit night that makes you feel as though the society you live in is doomed, and that the only possible reaction on your part to this hideous contemporary dystopia is to crawl under your duvet and never come out again. In other words, MONUMENTALLY shit.

We started off at the Hawley Arms in Camden (our endz), with a few Coronas. All was gravy (baby). We were feeling pretty chipper to be at the end of three (for some of us four) long years of sitting through conversations with young Marxists telling us how much they loved Simon and Garfunkel, and trying to convince our lecturers that, yes, actually we have read EVERYTHING on Structuralism (I know fook all about Foucault) We were in high, girlish spirits. Our whole futures lay ahead of us.
It was Thursday.
Because we hadn’t been outside for a while (I had been wearing my polar bear, we assumed that Smash ‘n Grab would be on so we headed to Punk in Soho. Turns out we were pathetically out of touch with yoof culture. Smash ‘n Grab hadn’t been on for ages, and had been replaced by another night. ‘Can’t be that different,’ we thought, as we coughed up eight quid and headed down into the Soho underbelly. We thought wrong.
Punk had been replaced by a night that is charmingly called “I got fucked at your mum’s house.” Considering that it was full of Essex boys in polyester shirts and pumping eurodance it wasn’t really our scene. It was presided over by a gobby middle-aged DJ who was wearing a baseball cap backwards. So far so West End.
We had a few overpriced rum ‘n cokes and tried to shimmy a bit to the R&B. My friend S, who is usually more of a Kate Bush gal, looked particularly uncomfortable. We were a long way from home. The discomfort spread to all of us, however, when the music dipped slightly and the DJs sleazy voice could be heard enticing girls up to the stage to get naked in exchange for drinks and cash. 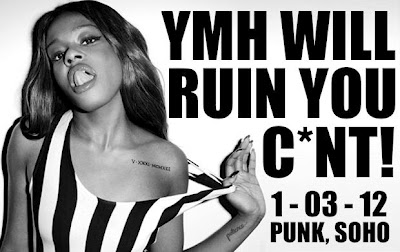 “CASH FOR GASH! CASH FOR GASH!” he hollered, as the a range of drunk girls were handed bottles of spirits which they were encouraged to neck before taking their clothes off in front of a packed club. They assumed, rightly, that most women would need to be rather drunk to participate. These women, some of whom looked very young, then stepped up onto a stage and, watched by a crowd of baying punters and to a chorus of “SHOW US YER TITS” “WE WANT BOOBS” and, of course “GASH FOR CASH,” did their thing.
Obviously, for a group of liberal feminist twentysomethings, the CASH FOR GASH portion of the evening was too much to handle. I may or may not have drunkenly told the DJ what a complete mysogynist bellend he was, before marching out of the door and asking for the manager. Once I told them I was a journalist they sent some skeezy PR guy out to do some damage control but he ended up just trying to hit on our friend, who was hammered. The general stance was that it was all a bit of harmless fun. The bouncer, in fact, was the most understanding person there. “Well, I wouldn’t want my daughter in there, let’s put it that way,” he said, clearly nervous that he wasn’t toeing the party line.
This wonderful evening was then topped off with us wandering desultorily through Soho, only to witness two sleazy-looking punters moseying guiltily into a brothel. They may or may not have incurred something off a drunken ticking off.

The evening ended with us staring into the bottle of our wine glasses in a quiet bar, not speaking. My friend S cried. We knew that we had witnessed something depressing. I felt as though I had lost a bit of my soul, and that I would never get it back. When S and I headed to McDonalds for a late night comfort snack and a guy in the queue grinningly SMACKED by arse, it all became too much. I let forth a tirade of abuse which would have made by grandfather who, God rest his soul, could swear for a minute and a half without repeating himself, blush like a Victorian lady. When one of the guys who had witnessed this then tried to hit on me on the 29 bus home with the line that “sexism was awful”, it really was the cherry on top of a fucking awful evening.
So fuck you Punk. I am never going to your shitty club again, because it makes me feel sad about being a girl. And feeling sad about being a girl is not how me or my friends like to party.

P.S. This article has no moral. Work it out for yourselves. Or email Scott from I Got Fucked At Your Mum’s House and tell him what you think.

6 thoughts on “The Worst Night Out Ever”