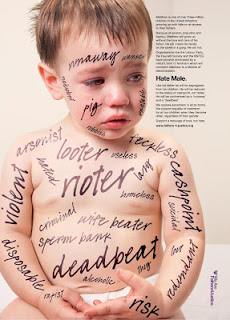 Sometimes, a week just flies by and you can’t keep track of it in between booking in your Botox appointment, removing your little toe so you can fit it more comfortably in the latest pointed heels, and crying about the 300 calories that you wolfed down in the short period of 24 hours. Wait a second, this isn’t Cosmo! What I meant was, you know, in between reading books and stuff. So in case you ended up thinking you read these events in the blurb for a dystopian novel, I’ve put together a list of things that Actually Happened This Week, just so we all remember that we still have some social mountains to climb.
Et voila, chicks and dicks:
1. In the most ingenious move since the Bay of Pigs, Fathers4Justice argued against Marks & Spencer’s partnership with Mumsnet by scribbling ‘wanker’ on a baby
2. ‘Steak and Blowjob Day’ advertised itself even more heavy-handedly, offering T-shirts and the idea that women owe their partners the two great bastions of civilised society – kitchen servitude and non-reciprocative sexual acts – because of the Hallmark-driven existence of Valentine’s Day (‘a day for women’). The official ‘Steak and Blowjob Day’ website added an ‘Images’ page that prominently featured a bird’s (cock’s?) eye view of a woman with a penis in her mouth for a while, then changed to a topless woman holding meat. Yum.
3. Louise Mensch a.k.a Satan, having moved her apparently ‘feminist’ career from stereotyped chick lit into Conservative politics, tore herself away from Steak and Blowjob Day to start a column in a women’s lifestyle magazine.
4. Arizona passed a law to allow employers to fire their female employees for taking the contraceptive pill – or, as I like to see it, they took back the wombs that they rightfully own through capitalism and conquered the epidemic of ‘whore pills’ once and for all
5. Rush Limbaugh, of ‘students who use the Pill want me to be their pimp’ fame, got Twitter. One of his first tweets was ‘Liberals Dismayed That… I Still Exist.’ Hats off to you, Rush, I couldn’t have put it better myself.
5. A leading UK supermarket advertised discounted toilet cleaner as ‘Perfect for Mum!’ during their Mother’s Day promotions. Judging by the viral uptake, a lot of happy mothers will be receiving this tomorrow. Just imagine her face when she opens the package, having assumed it’s merely a useless bottle of wine!
Here’s to next week, eh, girls?

3 thoughts on “Things That Actually Happened This Week”