So much has been said about feminism and Barbie that I can’t believe I’m even going there. There is seriously enough material out there to write a thesis (and many have.) It’s sort of like when you come home drunk, go on Wikipedia, and realise the next morning that you spent four and half hours reading about the history of the British Royal Family or dinosaurs (same thing?) There are simply not enough hours in the day to learn all this stuff.

I’m sure there are actually academics out there specialising in Barbie, and they probably spend 99.99999999% of the time arguing with other academics about whether or not Barbie is an oppressive force for evil or a feminist icon (clue: it’s the former). Feminists have famously had a lot of beef with Barbie. Betty Frieden described her as a “vacuous bimbo”, and in 1989 an awesome group of laydees called the Barbie Liberation Front went and switched all the Teen Talk Barbie voiceboxes with those of the Talking Joe G.I Joe doll. This resulted in a large batch of G.I Joe’s announcing “Math is hard” and “I love shopping”, in squawky Californian falsetto, while Teen Talk Barbie’s perfect blowjob lips boomed out “Vengeance is mine!” Needless to say, a lot of confused parents and children and a massive amount of publicity is the result.

If you’re reading this, chances are you have beef with Barbie. If you don’t, go and read the excellent Natasha Walter’s “Living Dolls” or this Guardian article and get back to me. I’m not your mum, I don’t have time to explain this shit to you.

Seriously, though. Being the irritatingly liberal spawn of liberal parents meant that I never had a Barbie. I wasn’t allowed one. That’s not to say that I escaped the tyranny of gendered playthings, however, obsessed as I was at one point with Care Bears and My Little Ponies (whom I used to send it to battle against a veritable army of  inaccurate Dinosaurs, caring not, at age six, that the temporal gulf between the Triassic and Cretaceous periods meant they couldn’t actually be friends) That didn’t mean that I didn’t want a Barbie, mind you. My friend Lauren had the Barbie mansion and the horse and carriage and about ten million of the things, and, well, I hated her for it. But it was ok because she had a consistently snotty noise. Deprivation can sometimes have the wrong effect, BTW-  the first single I bought, aged ten, was Barbie Girl by Aqua, which tortured my parents with by playing on a loop for a full six months (VENGEANCE IS MINE!)

Being relatively inexperienced in the Barbie sphere, I put the question to twitter, with hilarious and often alarming results. Seems a lot of you out there used to torture your Barbies, or even, in one perturbing case, made all the other toys gang up on her, shave her head, and call her a collaborator. Others lived in utopian harmony with Action Man, trolls, and goblins running garages and cafes together. There were also many cases of Barbie roleplaying involving lesbianism and group sex. It seems that kids are freaky deaky no matter which toys you give them (or perhaps it’s just our readers?) and most of them, Barbie or not, will turn out okay in the end, hopefully.

Whether you choose to give your child a doll which encapsulates a reductive feminine stereotype or not, there’s no denying that Barbies have become more heavily sexualised and pinkified in recent years. If you don’t believe me, go to the Toy museum in Prague, which is where all these pictures are from (there is also a wonderfully incongruous Polar Bear placed haphazardly amongst a First World War Battle Scene). It’s an often quoted maxim that Barbies would be unable to stand up if they were blown up to lifesize proportions, and I don’t know whether this is true or not, but the metal stand rammed up the posterior of the one in the Toy Museum that I made my boyfriend stand next to implies not. 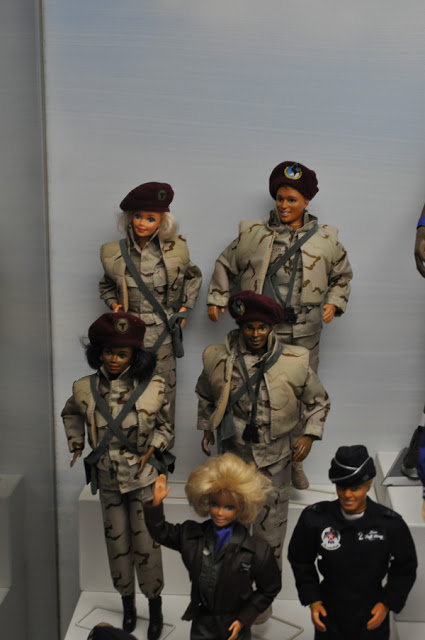