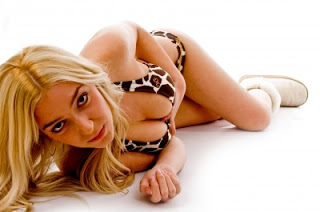 Ever at the cutting edge of serious and scientific news, the Daily Fail celebrated last week’s charming and not at all made-up National Cleavage Day by reporting on a survey by Wonderbra (the same company who invented the day, naturally) that says ‘women use their cleavage to get ahead in life.’
Sadie Whetlocks at the Fail claims that cleavage is ‘our secret weapon.’ And it’s a weapon that we sorely need to ‘give our careers a boost’, since men get all those other secret weapons we don’t have access to, like intelligence and ambition and stuff.
A spokesperson from Wonderbra – so, thankfully, somebody with no vested interest in the matter – is reported as commenting that ‘showing your cleavage is the embodiment of empowerment.’ So true. Feminism = objectification. Have these guys been getting their tips on what empowerment means from the F Word campaign at Cosmo?
Further down, it’s reported that Wonderbra have unveiled a Hall of Sexist Sentiment and Tears at their HQ, which they then quickly renamed the Cleavage Hall of Fame after consultation with their press department. In it, they’ve taken pictures of celebrity women and rated them on their cleavage. I think we’re all pleased to hear that Holly Willoughby is the winner – ‘we are thrilled that British beauty Holly Willoughby fought off such strong competition,’ simpered Wonderbra spokesperson Martina Alexander, who was accidentally-on-purpose referred to by the Fail as ‘spokesman.’ And what a fight it was, eh? It’s not like she was completely passive in a process that involved judging photos of her tit skin or anything like that. This is empowerment, girls, after all.
While the Fail has been busy reporting on how women can ‘get ahead in the workplace’, Vogue tells us that Indonesia is considering banning the miniskirt. ‘We know that there have been a series of rapes and other immoral acts recently,’ they quote Indonesia’s House of Representatives Speaker as saying. ‘Those things happened because women don’t dress decently, prompting men to do things. You know what men are like – provocative clothing will make them do things.’ What’s he like, eh? (Like other ‘men’, presumably: a potential rapist in a suit, just waiting to be provoked by the wrong woman and then unfairly blamed for his actions.) And shouldn’t that last sentence have been cosying up with the Fail coverage of National Cleavage Day to further support their ‘findings’ that women use their cleavage ‘to get ahead’? ‘Spokespeople for Wonderbra and oppressive governments around the world agree: women’s bodies are responsible for all the bad things that men do. Men’s brains are responsible for the good stuff. Oh, and when good stuff happens to women, it’s because men let it happen.’
Vogue hasn’t challenged the words of that joker, but it has supplied a photo of a model in a miniskirt and headed the article with the line: ‘Banning the Mini.’ Lamenting the more important things in life, then, rather than, y’know, personal dignity and equality and all that.
Well, I’m off to the underwear store, guys and gals. Can’t believe how much time I’ve wasted at my desk, doing work and expecting a promotion. I could’ve been squashing my tits closer together all along!
Image credit to imagerymajestic - truly the embodiment of empowerment, ain’t it?

4 thoughts on “How National Cleavage Day Empowered Us All”