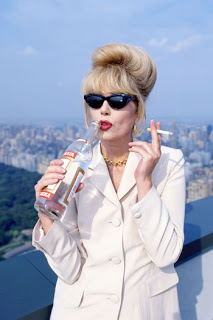 When done correctly, power dressing can be like donning invisible superhero armour
I work in one of those offices where you’re expected to dress ‘well’. You know, where the guys come in in Topman and the girls come in with a dress by Ms Celine, whose services were prioritised over Mr Heinz, Mr Kingsmill, and Messrs Ernest & Julio Gallo.
I’ve always thought dressing up for work to project a ‘brand image’ is pretty wanky. Do the people I put on hold whilst I swear loudly and hit the computer know or care whether I’m wearing 5-inch heels or porous Primark pumps?
Nah, I reckon not, but after months of wearing a T-shirt and jeans to work, I overstayed my welcome at the 24hr eatery known as chez parents and came back to find the jeans did not fit. In fact, the jeans stopped fitting quite dramatically when I sat down on the train and almost took out the person opposite me with the button, but that is another story.
So I decided to start ‘dressing’ for work, and realised how good power dressing can be. I know I shouldn’t need to wear a damn fine pair of cigarette pants to feel more capable of ordering photocopier toner, but for some reason, it helps.
That said, it did irk me somewhat when they felt the need to make Scarlet Johansson’s character in The Avengers change from normal clothes into a tits and arse oneise when she went into save-the-world mode. Now I know the same applies to Captain America, but there’s something *somewhat* sexualised about a black cat suit with a half done-up front zip. An American flag suit with a shiny star hot glue-gunned on to the front isn’t quite so ‘come get me out of this, boys’ (or is it? Captain America is pretty camp, come to think of it). Though I’ll forgive Scarlett’s unzip-me zip, because the film ended without her having to hook up with one of the leading men, as is usually the fate of the ‘strong woman’.
So, in short, I reckon power dressing shouldn’t be something we feel bad about. While in the eighties power dressing was associated with the worst kind of person, the yuppie, there’s a lot to be said for the trail they blazed with their ridiculously proportioned shoulder pads. By dressing like men in a men’s world, they forged ahead to the point that now, while it is still a men’s world, we can negotiate its pitfalls without having to look like complete twats while we’re doing it.
It’s a shitty world out there, and clothes are a good armour, whether your work involves making your boss’s coffee and worrying, or saving the world. Power dressing is for empowering, not sexualising, and as long as bosses and employees alike know that ‘brand image’ should not involve getting your baps out on days when important male clients are in, everyone’s a winner.