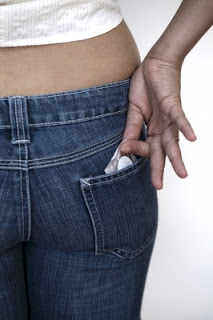 I was seventeen years old, living in the most backward depths of Gloucestershire, and I needed the morning-after pill. They’d told us that it existed at school, during a stilted and awkward sex education lesson where they also asked us to ‘write down as many STDs as you can think of’ and put a condom on a banana. My condom had ripped as I slid the unfamiliar rubber down its turgid yellow form – so was it any wonder that inevitably, three months down the line, I’d ended up skulking sheepishly around the back of the local pharmacy?‘Do you sell the morning-after pill?’ I whispered confidentially to the two middle-aged women behind the counter, who immediately widened their eyes and ushered me into a private room.

‘You could be pregnant already,’ one said to me, hastily unwrapping a pregnancy test. ‘How many times have you done this thing?’

‘I don’t need to pee,’ I muttered in slight protest, before being bundled into a toilet and forced to wait until I could soak a plastic stick. Not pregnant. Not surprising, since I’d only had sex three times, was on the regular contraceptive Pill, and remained assiduous about condoms. I’d missed two days from my packet that month and freaked out, and had expected the pharmacists to be that smiley version of the woman in Boots adverts. I thought they might bring me a cup of tea. Needless to say, they instead subjected me to a useless rigmarole, a quiz about my sex life that went far beyond the strictly necessary, and sent me away with the impression that I had made them think again about the youth of today.

If I encountered such strange attitudes now, I would be far less likely to play ball – and I certainly wouldn’t quake in a cubicle with a pregnancy test poised under my fanny, waiting to prove to two so-called pharmacists who clearly hadn’t paid attention in the ‘basic biology’ part of their training that I wasn’t hormonally pregnant 24 hours after sex. But the thing is, teenagers are vulnerable. And that’s what most of the arguments this week about the Pill centre around.

The contraceptive Pill and the morning-after pill (or ‘emergency contraception’) are two different things that work in similar ways, and the Daily Fail hates both of them. Making the contraceptive Pill available without prescription – yes, even to those bastions of ill will and anarchy, teenagers – has proved a great success in a pilot study, and so those arrogant researchers have gone ahead and recommended it be carried out nationally. Medical advice based on carefully conducted research, you say? Back in the days of morality, we called that voodoo.

Of course, there was painfully predictable uproar in the tabloids. Outraged, the Fail reported: ‘Doctors, nurses and pharmacists are legally allowed to give the Pill to a girl under the legal age of consent as long as they ensure she is aware of the risks of having sex and of taking the medication. Due to patient confidentiality laws they cannot tell the girl’s parents.’

Christ alive! Tell me this is some vision of hell that I saw in a dream! Patient confidentiality? Implying that teenage girls might be aware of the risks of having sex? With no one even waiting at the door to belt them when they get home? HOWEVER WILL THEY LEARN?!

The thing that the press is really attacking here is the prospect of patient confidentiality, since a teenage girl can now and could before visit a GP’s surgery and receive medical treatment without the doctor informing her parents. Children aged even under 16 are protected by absolute confidentiality so long as the doctor believes they understand the implications of their actions and how to use any prescribed medication. Extending this right to the pharmacy is really just a movement for convenience, and doesn’t affect the fact that young teenagers who are judged to be sufficiently mature can get a hold of contraception, perfectly legally and perfectly confidentially, without the knowledge of anyone else in their family.

This kneejerk media reaction to an increased availability of the Pill – mirrored in reactions to the contraceptive implant and the morning-after pill in the last couple of years – is par for the course, but why? Apart from the general morality brigade, there is a lot of implication that young girls will be ‘taken advantage of’ by young boys; that they ‘don’t know when they’re ready’ to take the next step into becoming what they presume is merely a receptacle for a young boy’s penis – which, by the way, is not enshrined with all this mystery of ‘readiness’ and ‘purity’ that surrounds a young girl’s vagina. Naive all teenagers may be, but most of them are interested in their own bodies and the bodies of others, experiencing and enjoying sexual feelings, and beginning to take charge of themselves in a world where they can legally hold a gun and go to war before they can vote.

The contraceptive debate zones in unfairly on young girls, and the undertone that suggests they might be ‘ruined’ by sex persists. Those who are openly seeking contraception are not the ones we should be ensnaring at the doctor’s surgery and ostracising for behaving like the slatterns that they so clearly are. And let’s remember that nobody is patrolling the condom aisles for underage boys furtively getting their hands on material for a posh wank.

Was I vulnerable and stupid when I was seventeen? Hell yes. But was I conducting myself as sensibly in my sex life as I do nowadays? I’d have to say that I was – and since I was probably a damnsight more fertile than I am today, I’m sure as heck glad that the pharmacy with the morning-after pill was there, even if it was presided over by two judgemental old biddies.

2 thoughts on “Teens on Pills”