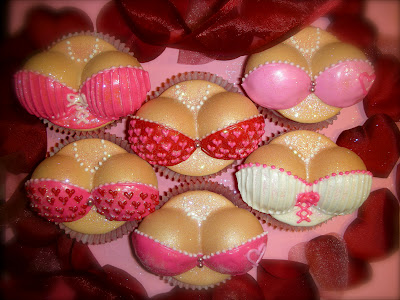 Act I, Scene I
The shop floor of a cupcake shop. Dee, the proprietor of D:licious Cupcakes, is holding a meeting with her three ‘cupcake artisans’, Lulu, Moni and Jonesy.

Dee: Okay, girlies, we’re going to be doing a burlesque-themed cupcake line for the annual amateur burlesque competition! Anyone got any really naughtyideas?

Lulu: How about we use piping to make the ruffles of a skirt, and then get a pair of pink marzipan legs to stick out?

Lulu: Thanks, I saw it on the cover of Triple X Cupcakes Volume 3 in the crafts section of my local bookshop.

Moni: I didn’t know your local bookshop had a crafts section.

Moni: I’ve seen one of them origami books. It was all about how to make origami jewellery. I wanted to make a flappy crane –

Dee: Moni, do you have any ideas for the burlesque-themed cupcakes?

Moni: - still, I had a look at the origami jewellery book and in the ‘Difficult’ section, there was a project called ‘Make an Origami Boyfriend Who Gives You Origami Jewellery, Like Nigel Never Does’ – sorry, what?

(Dee raises her eyebrows and passive-aggressively taps one index finger against an exquisitely rouged cheek.)

Moni: Oh, yeah, right, sorry. How about we do a tit? It’d be pretty easy to make with icing and we can use those edible silver balls to make a tit piercing, if we wanted. We could also do pasties, not the delicious pastry kind, the sparkly kind burlesque dancers wear as a tit hat.

Dee: Moni, that’s fabulous! Very naughty! What about you, Jonesy? Any ideas for cupcakes?

Jonesy: Well, I thought we could bake a kind of prim old-fashioned fruit cake type dough but have a rich syrup filling, that would pretty, you know, sinful and sticky. Like sex. And, erm, I’ve been working on this chocolate bread, it sort of melts in the toaster but, well, apparently eating chocolate is quite ‘naughty’, although I don’t fully understand why it would be, I mean, the Mayans and the Aztecs used to use it in religious ceremonies, they even had the same word, xocolätl –

Dee: (both coldly, and wearily, as if she has to do this a lot) No.

Jonesy: (weakly, but still hopeful) No?

Dee: How many times do I have to tell you, Jonesy? Cupcakes aren’t about baking. They’re about the idea of baking.

Dee: (sing-song, dangerous) Then I’ll just have to tell you all over again, won’t I? Now. We need some ideas for burlesque-themed cupcakes. A lot of people go to the amateur burlesque competition. A lot of women. Women who keep up with the zeitgeist. And what is zeitgeisty right now is 1950s does twenty-first century. And that’s us, girls. (Jonesy, Moni and Lulu all register faces of confusion, to varying degrees of gloom, but Dee plunges on.)So, Jonesy… perhaps you’d like to think again?

Jonesy: Er… (looks desperately at Moni, who shrugs and starts wiggling her eyebrows wildly, as if trying to convey something. Nothing is conveyed.) Er… well, if we’re doing tit cupcakes, how about a vag?

Jonesy: Like, we could do the labia and the clit in icing? And chocolate sprinkles for the hair? And maybe we could squirt a bit of whipped cream on the inside? That’s pretty naughty, right?

Dee: THAT is not NAUGHTY. THAT is PORNOGRAPHIC.

Dee: Breasts are zeitgeisty, Jonesy. Ladygardens are not. Ladygardens are dirty. I want you to go home right now, and if you come in tomorrow without a decent idea for D:licious Cupcakes, you’re going to have to find another way to pay your bills.

Act I, Scene II
Jonesy’s flat. Jonesy shares a cramped flat in Stoke Newington with someone who looks as much like Lena Dunham as the producer can find. ‘Lena’ is warming a bottle of red wine under her armpit in lieu of letting it breathe for an hour, because who even does that.

‘Lena’: I had someone gently hint that I was a fatass today.

Jonesy: Oh, no, you’ll not believe what Dee wants –

‘Lena’: Your cupcake problems are heartbreaking but probably a slightly less horrible anecdote than my burlesque ones. For the sake of ratings, I’m going to interrupt you and plough on.

Jonesy: What are you talking about –

‘Lena’: (talking over Jonesy) So, as you know, I’ve been planning a Dante’s Inferno themed burlesque piece for well over two days. I’d bought all this bunting and… stuff… and, like, merkins made of fake fire and stuff… off Etsy, and I was learning to wiggle all the bits of my body whilst looking convincingly like a member of the damned and so on. And they told me I wasn’t ‘quite suitable’ for the competition!

Jonesy: That’s not the same as calling you a fatass, but it’s still kind of unjustified. Did they say why?

‘Lena’: I wasn’t part of Miss Vixen La Voyeuse’s School of Burlesque and Pole Dancing, and I wasn’t wearing a pre-approved outfit. Pre-approved outfits, incidentally, are underbust corsets in cheap satin and lace with matching thong, plus those curtains tassels you wear on your nips to spin, except no one spins them. They just walk up and down doing lacklustre high kicks and grinning.

Jonesy: Not so much with the hilarious commentary about wanton sexual mores landing you in the first circle of Hell?

‘Lena’: I was working some seriously interpretative dance, but because I wasn’t in plastic platform Mary Janes, they did not care. Also, apparently, the ‘tableaux’ dances are done in descending height order, and there’s already someone my height in the spot. She’s Sexy Snow White, for no reason. Anyway, what’s your baking beef? Wine?

(Lena extracts the wine from her armpit and starts to wrestle with a corkscrew. Over her sotto voce ‘come on come on you twisty bastard’ Jonesy imparts her tale)

Jonesy: Dee got on my case about being able to bake again today. She’s doing a line of burlesque-themed cupcakes to sell at the show –

‘Lena’: Oh no oh no. Cupcakes and sanitised burlesque? Will there also be ready-mixed cocktails and Ann Summers reps and women wearing fascinators for no god damn reason?

‘Lena’: You have to stop her. If a reasonable woman sees this show and eats a cupcake, the sugary-sweet bland assault on all her senses will make her grow tacky fascinators out of her scalp. This horrible post-Christina Aguilera floor show is the cupcake to the homemade carrot-and-walnut cake of risqué theatre. Jonesy.

(‘Lena’ gets up and goes to stand in front of Jonesy, who produces two glasses. Their eyes have locked in total seriousness. ‘Lena’ pours two glasses of wine without breaking eye contact.)

Act I, Scene III
The kitchen of D:Licious Cupcakes. Late at night. Very dark. ‘Lena’ and Jonesy are stumblimg around. It is evident from their behaviour that they are both very drunk and on a mission.

‘Lena’: Stop bumping into me and concentrate. You might push me onto a knife and then you won’t have a comedy sidekick.

Jonesy: This is a bakery, not a, a, a, sushi restaurant. There aren’t any knives here. Cupcake mixture is pretty much ready-made.

(This is so unfunny that both girls giggle, starting and subdued and working their way up to proper throaty guffaws. Then suddenly – clicky clicky. Someone is trying to open the shop door.)

‘Lena’: Jonesy… how many other people have the key to the shop?

Jonesy: I- I’m not sure. (She sniffles a bit) No one ever bloody tells me anything…

(A tinkle of bells as the door swings open. Heavy footsteps, coming towards the kitchen. Very loud in the silence. They stop abruptly.)

(Pause, then a light switch is hit. The tragic scene is revealed. There are a lot of novelty items of kitchenware that are probably from Cath Kidson, a fatalistic looking Jonesy, a frozen Lena, and, finally, Moni)

Moni: (in her normal voice) What the buggering bum are you doing here?

Jonesy: (faint with relief) I was going to destroy the cupcakes for the burlesque show.

Moni: We haven’t made ‘em yet though.

Jonesy: Oh… yeah… right. (She glares at ‘Lena’, who is admiring a floral-patterned mixing bowl. ‘Lena’ drags her finger inside the bowl and brings it up smeared with dust. She stares incredulously at it as Jonesy and Moni talk.) Well, what are youdoing here?

Moni: I was sort of planning sabotage too, except I was going more along the lines of blowing up the shop.

TO BE CONTINUED (well, not really, you get the idea, the writer hates cupcakes)

2 thoughts on “The Cupcake Conspiracy”