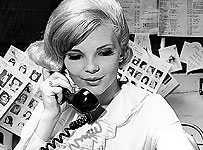 So it’s always fun to see the slant that people will put on totally uninteresting studies, and this week threw up a particularly shit one. A ‘study’ into who people make most of their mobile phone calls to was actually published in an academic journal called Scientific Reports, which is surely the equivalent of publishing a strip from the Dandy in Psychologies magazine.

The conclusion of this groundbreaking study? WOMEN CALL THEIR SPOUSES MORE THAN OTHER PEOPLE. Thank God they didn’t waste their money on research into cancer or AIDs or something insignificant like that (and by AIDs I mean good AIDs, not bad AIDs.) And how strange that the conclusion would have such an unexpected twist. Their spouse, you say? Not someone – well – more appropriate? More involved with their lives? There are no reasons I could possibly fathom that would explain this entirely new and bizarre contribution to human knowledge.

What headline did the BBC – yes, the BBC – go with to report these findings? ‘Phone data shows romance “driven by women.”‘ Oh right, yeah. I can see that. Despite the fact that the study also found men called their spouse most often out of all of their contacts for the first seven years of a relationship – and that later in their relationships, both sexes moved slowly on to calling friends up more often, presumably because they were now living with their spouse – the conclusion of the study went like this:

According to the study’s co-author, Professor Robin Dunbar of Oxford University, UK, the investigation shows that pair-bonding is much more important to women than men.
“It’s the first really strong evidence that romantic relationships are driven by women,” he told BBC News.
Well, girls, what can we do with ‘really strong evidence’ like that but shrug our shoulders and concede that phoning up your spouse a lot means that romantic relationships are driven by women? Is it me or is this logic along the lines of something you might find in the Daily Fail – ‘Study shows that students call their mums more often than their dads BECAUSE IMMIGRANTS ARE DRIVING US INTO MATRIARCHY.’
This really just sounds like someone in the BBC wants to remind us of the best ‘general consensus’ dichotomy of our age: WOMEN LIKE ROMANCE AND MEN LIKE SEX, YEAH? They’d have wasted so much less time and money on just writing those eight little words across the BBC Science section, preferably in Comic Sans MS – but then they hardly ever take any of my content ideas on board at the Beeb or at Oxford University research councils nowadays. More fool them.

One thought on “The Mobile Matriarchy”