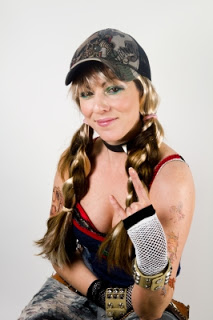 I have a confession to make.

When the week is done, and I stagger home through half-deserted streets (who am I kidding, I live in London, I elbow my way through the mob) to home, my greatest desire post-Supernoodles is not to go to a literary salon. Or to take MDMA and listen to minimal techno in a warehouse full of sweaty oiks. Nope – all I want to do is go to a grubby bar and listen to hip hop, for 8 hours, until I can’t feel my feet and I think I’m being hit on when actually it’s just the barman saying, ‘Excuse me madam, you cannot have these Jaeger bombs because your card has been declined for the sixth time.’

But here’s the thing: 99% of hip hop is really, reallyreallyreally misogynistic. I used to be able to laugh it off because these men are probably secretly terrified of talking to girls in a non-‘hey bitch, I eat Rolexes for breakfast, hop in my Lamborghini Escalade’ kind of way.

But when Jay-Z became baby daddy recently, he made the profound claim that he was no longer going to call women ‘bitches’ in his songs, because he couldn’t bear the thought of his superhero child Blue Ivy being referred to as such.

And it made me think, actually, there is no fucking excuse whatsoever for these douchebags to be going round and saying things like ‘I’m fucking different bitches every day of the week’ (direct quote from The Game there, GENT).

So, I have stated the blindingly obvious – what’s the solution? Because I really, really hate techno.

I tried listening to women rappers for a bit, who are fewer in number but equally as good as their male counterparts, naturally. Missy Elliott, Eve, Rah Diggah et al of the noughties when feminism was cool in the USA are fairly good in the sense that they adopt the typical male rap persona of ‘I can fuck who I want bro’.

‘Just because he spent a little dough he think I’m gonna fuck,’ says Rah Diggah, in the Touch It remix. Great! shouts feminism, RIGHT ON! But what’s this? ‘If money ain’t a thing/ I’m saying let a bitch know/ time to empty your account/ how far you willing to go?’

Feminism sits back down in its seat and lights a fag.

I’m sure there are rappers out there who aren’t misogynistic, but they’re not getting played in my dive bars on a Friday night. And it’s not a case of new stars changing the scene – it won’t happen. We need more Jay-Z lightbulb moments; we need the big names to stop shoving women’s faces into their crotch at gigs (true story at The Game’s UK shows last year).

I’m counting on Jay-Z to pop a memo out to his pals right now, both male and female, to say misogyny in rap ain’t great, so I can go back to dancing the night away badly with a clean conscience. Can you do that for me, Jay? Coz you’ve only got seventeen more years before Blue Ivy will want to dance her socks off to something a little more enlightened.

Thanks for the pic, FDP

14 thoughts on “A Call for Hipper Hip Hop”