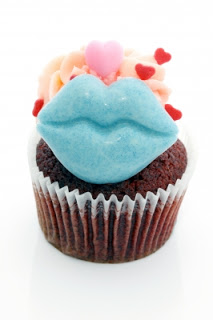 Every woman has her own battle. Be it a tempestuous relationship with a tanning agent, difficulty finding the perfect moisturiser, or the correct way to deal with being offered a seat on the tube, everybody’s got something that simultaneously really needs to be personally reconciled with and really, really gets on their tits.
Mine’s cupcakes.
Everything from recent girly meet-ups to those painful ‘Baking’ albums on Facebook is telling me that a) a cupcake is as an essential item in a real girl’s arsenal, and b) they are a conversation starter in the same way that a baby is, or a new piece of furniture, or a haircut. Girls and women now place a tenderly arranged plate in the middle of a social gathering to various coos and ‘oohs’ and ‘aaah’s. All that work, for something so tiny. Like our very own flour baby. A cupcake, far from being a dinky inoffensive chunk of sugar, butter and fairy farts, is as much a part of and a barometer of modern femininity as Veet and miniskirts. Despite championing the Pankhursts, we are also meant to want to be Martha Stewart. And that drives me mental.
Jezebel posted an article today about how the cupcake has become synonymous with both the vagina and (weirdly) the female orgasm. That a cupcake is a private, sweet and delicate affair, while also being an item that is not to be shared, that is about selfish self-gratification. That a woman stuffing her face with a cupcake is a woman who has her cake and eats it, both in the bedroom and out of it. Go girls! You can put whipped cream ANYWHERE YOU LIKE! OWN IT!
Now, along with the sisterhood’s constant, naggingly sweet habit of making me feel like my ovaries are just for show unless I bake dinky cakes, I find it a deeply disturbing notion that women’s attitude to sex is now represented by a pastel-coloured, palm-sized confection. It comes from a shop called Hummingbird or Magnolia (unless you’re a badass and bought yours at Cox Cookies and Cake). It matches the wallpaper. Is this really what women want their sexual appetite to be represented by? A fluffy, cutesy, dinky little pastel cake? You’re willing to accept that your sex life is literally vanilla?
Sex (as Caitlin Moran rightly notes in her chapter that includes a description of her cupcake flavour being ‘a lovely pie’) is not sugar-dusted. I once went to cookery school and the chef, upon infusing a dish with truffles, noted that they smelled like sex. True, I wouldn’t wear them as cologne, but I don’t consider a night of passion thus if it’s scented with candy-floss. Personally, I’d prefer it to be represented by, say, lasagne – delicious, decadent, filling and satisfying. And NOT over in two minutes.
And it’s not just our own cupcakes. The bloody things seem to have become a metaphor for our confinement. Remember when you were a kid and you stuffed your face with birthday cake? (Use this blog post to remind you if not.) The cupcake represents a compromise between our desperation to fit into those tiny jeans and minidresses that we’re supposed to wear, while satisfying that inherently ‘feminine’ craving for sweet things – a mash-up between youth and adulthood. With frosting. Like us, they’re decorative, cute and essentially window-dressing.
Give me a big, messily filled but tasty Victoria Sponge any day. Now that’s a real cake. People gather round a proper cake and lovingly yet sneakily carve the uneven slices in a politically engineered eat-off that you just can’t get with a box of cupcakes. While the most famous cake-eater in history, Marie Antoinette, didn’t do so well out of her supposed affiliation, the cakes in those days were about wealth, status, position, and excess. Aside from eating three Hummingbird Bakery cakes in one go, you just don’t get the same sense of satisfaction as you would when you eat the bejeezus out of a roast dinner. You can’t lie around with your stomach heavy, groaning, and exhausted, after cupcakes. You cannot defeat a cupcake. That’d be like winning a wrestling match with a chick (yes, of the baby chicken variety.) Except a chick, being so cute, is far harder to get rid of. And that’s the conundrum with cupcakes. They are inoffensive enough to offend on a daily basis. And they will keep doing so, in all their deliciousness, every time I walk down Wardour Street.
Maybe I’m just bitter because I’m tired of bringing my sass, wit, banter and fabulous hairdo to gatherings and feeling second rate next to a pile of iced delights. Maybe I’m annoyed that, on a crap Sunday afternoon, I can’t exactly stuff my face with frozen portions of kick-ass bolognese. Maybe I’m depressed that my ovaries are worth nothing unless I can ice them with frosting. But I just plain don’t think that a small, doiley-wrapped iced fancy is an adequate representation of women, or their orgasms, today. A cupcake is a tasty treat and a nice thing to bring to a picnic. But the way that they are filtering stealthily into the popular pysche of what it means to be a woman (hell, Jezebel has a section on their blog dedicated to them) needs to be stopped. And replaced with a food item that better represents a modern woman. Our mothers cooked casseroles, made amazingly complex birthday cakes, and knew killer chicken soup recipes. When we’re mothers, no doubt we’ll know the same. But while some of us remain girls-not-yet-women, I’d rather not be represented by something that comes in that tiny a box.
Thanks for the pic

18 thoughts on “Getting Baked”