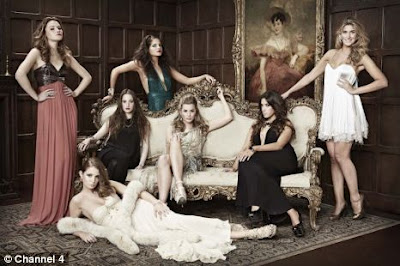 First, a confession. I love Made In Chelsea. I love their lives and their holidays, I really love their ‘jobs’. I get especial pleasure from their huge, blindingly white teeth and their ridiculously fulsome and glossy hair (surely the result of generations of trophy wives). There is genuinely nothing I like better than sitting in a pair of greying pants with questionable stains on them, while watching people called things like ‘Caggie’ and ‘Binky’ holiday in Dubai, even while the sensible part of my brain quietly screams ‘WHAT IS THIS A HOLIDAY FROM?’
But there’s a fly in this sumptuous, Crème-de-la-Mer ointment. It is not, to my shame, the (perfectly legitimate) argument that it’s a little distasteful in the current economic climate to produce a programme that details the children of bankers practically using money as toilet paper to an M83 soundtrack. No, I’m an obedient child of the capitalist culture, and if I can’t afford to go to a spa in Hampshire then I’m rendered docile and happy watching the aristocracy do it. My issue is more that the women on this show – presumably the happy recipients of the best education money can buy – are almost without exception interchangeable, glassy eyed bore-factories who only get worked up when a man is present, or when a man is being talked about, or when one of their friends has fucked/wants to fuck/once dreamt about fucking their man. What makes this entire situation all the more confusing is that the male cast of Made In Chelsea is a repugnant group of overbred, prematurely-balding and red-faced Chelsea boys who look like Boris Johnson after a not entirely successful ‘Ten Years Younger’ makeover. That is not my point however, dear readers. To each her own. If you wish to make the beast with two backs with a scarlet coloured biscuit-heir, far be it for me to judge you. Hobnob your way to happiness.
But we’re all aware of the Bechdel Test – yes? That for a movie to be acceptable, nay, watchable by a feminist audience it has to have at least two women in it who talk to each other about something other than a man. Now, I thought this was because the film-industry is dominated by (altogether now) THE FORCES OF PATRIARCHY, who cannot imagine what women would discuss when men weren’t around other than how to get those men back to fill the awkward conversational hiatus occasioned by their departure. This makes sense: women scripted by men don’t talk like real women. But the women in Made In Chelsea aren’t scripted. I know, I know, it’s all controlled and fake, and the ‘plot-mover’ questions are increasingly cringe: ‘So how do you feel about Hugo now?’ ‘So where do you think Richard is taking you for his date?’ Yes, so far so scripted, but the dialogue itself is – truthfully – a little too rubbish to be scripted.
Let’s take the recent introduction of new character Karin. The reason she’s surfaced is because she and Spencer, to quote her sister, ‘had a little thing in the past but it was never really anything’. I mean, I know Hollyoaks isn’t great, but I have faith enough in E4’s staff-writers that they could shit out better dialogue. And, who am I kidding – Hollyoaks is great. Anyway, Karin’s sole purpose is to make Louise, Spencer’s current squeeze, feel insecure and – we assume – act like a jealous maniac in future episodes. The sole purpose of any female character in this show, in fact, is to make another female character feel insecure, and to provoke a dramatic series climax à la Rosie-and-Milly-Gate. We never see these women talking about anything other than their menfolk, we never see them truly enjoying themselves, or making fun of themselves, or doing anything vaguely endearing. Karin’s Spenny-related past was revealed, for instance, when the girls had gone to above-mentioned spa to ‘escape’ from men-related issues. FOR GOD’S SAKE GIRLS. Spas are, by definition, womeny. I can’t think of anything that would make me more uncomfortable than a stranger fondling me with oils, but if you like that then good for you – go with your female friends, indulge in dubious ‘treatments’ but most importantly: TALK ABOUT ANYTHING OTHER THAN YOUR EXCESSIVELY PROMISCUOUS BOYFRIEND. Please.
Obviously editing is partly to blame. We get a lot more scenes of the men just enjoying each other’s company and generally acting human. Presumably the powers-that-be at E4 Towers have assumed that’s what its viewers want – funny men and bitchy, hauntingly beautiful but disturbingly glassy eyed womenfolk. But you can’t get away from the fact that these women are horrible to each other. There seems to be little loyalty, but most importantly, little joy in their lives. This seriously messes with the pleasure I personally derive from the show. This shit is meant to be aspirational ladies! I won’t be jealous of your ostensibly fantastic lives if you all clearly hate each other! Obviously I want to live on The King’s Road and wear massive J-Lo hats all the time as though it’s a normal thing, but I would like to talk about something other than whether Spencer wants to fuck me or you, or both of us. So, I beseech you, recall your undoubtedly intimidating classical education, and think of something to discuss other than the men in your lives. Endeavour to become more than pawns in a game played by overpaid and underworked Chelsea boys. Then I can get back into my grey pants, repress my socialist leanings, and enjoy your ridiculously aesthetically pleasing lives once more.
-RP

5 thoughts on “I Don’t Want To Go To Chelsea”