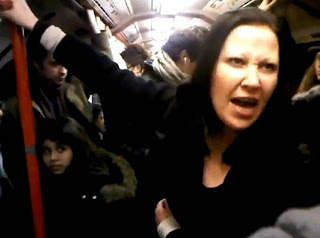 Jacqueline Woodhouse isn’t doing very well. A racist ranter of the most wasted calibre, Woodhouse was hit with a fine in 2008 for doing some sweary nonsense on the tube. Now she’s done it again and is going to prison for 21 weeks, after a fellow passenger filmed her mid-tirade.
There is a happy way of looking at the result: this was multicultural London at its best. The camera phone footage was taken by a Mr Galbant Juttla, a London-born Sikh, who started filming after Woodhouse rounded on an unidentified black passenger. Next to Woodhouse, a remarkably unperturbed Pakistani man starts singing his national anthem mid-swearword. In the very small melting-pot of this carriage, a single, intolerant, nasty, sour woman hasn’t been allowed to ruin the peace’n’love. Harassment and threatening language has been dealt with uncompromisingly, and YouTube has been a host for JUSTICE like it was with that woman wot put a cat in a bin.
Then there are less happy ways of looking at it. Putting Woodhouse in prison probably won’t change her opinions. She should be given another fine / community service in an ethnic minority community. And can you really put someone in prison for yelling? (What’s the charge for drunk and disorderly these days, is it still a night in the cells and a bucket of cold water in the face the next morning? Is it still the 1930s? I’m not sure, I woke up pretty late.)
I can’t give you the final answer on whether the sentence was right or wrong, and since this article isn’t the Daily Fail comments section I’m not even going to try to tell you. I’ve got a whole new angle. It starts like this:
Jacqueline Woodhouse comes from Romford, which is a couple of area codes away from my own suburb. We’ve got a very popular nightclub called Funky Mojoe (haha) which sits next door to an old peoples’ home, so the whole place is pretty mixed up and crazy. On Friday and Saturday nights, I am occasionally greeted with ‘cheer up you miserable bitch’, ‘show us your tits’, ‘ugly cunt’, ‘nice legs’ and once, memorably, ‘Let’s rape her,’ muttered by one of a group of fifteen year old boys. They weren’t even really looking at me. They’d just picked up on the word ‘rape’ as a threat and were waving it at me like they’d carved a carrot into the shape of a gun.
I once tried to film someone who was aggressively harassing me in the street. He was really quite close and I was considerably freaked out. In fact, I was so freaked out I forgot how to operate my phone – not that it mattered, because this guy responded by trying to wrest the phone off me and twisting my wrist. I profoundly regret trembling too much to be able to find the right button, because by the time help arrived he’d already fucked off and I had nothing to show for it.
A very brief Google brings up three racist ranter videos, and they’re all woman. That’s not because women are more racist than men, or more likely to express racism when they get drunk. It’s because verbally abusive men are more intimidating. I’ve been trying to unpack this revelation in a way that isn’t sexist, and I’ve come to the conclusion that the racist ranter type of man comes with a propensity for physical aggression that is just scarier than a violent woman’s. I am more afraid of being physically attacked by a man than a woman, because I’d have an easier job holding a woman off. I think most people are. Which means when some mad bastard rounds on me in the tube because I look ‘a bit chinky’, which has also happened, no one whips out a phone. No one even blinks.
A fundamental tenet of feminism is equality between the sexes, which means all arseholes are the same level of arseholery, regardless of gender. The drunken aul’ bitch is a comedy archetype that society as a whole is comfortable with mocking and vilifying. The drunken man is a bit more of a renegade, a bit less of a laugh. Jacqueline Woodhouse’s punishment is two-fold: she gets the jail sentence, and probably loses her job, which is the material, measurable part of the penalty, but there’s also the less tangible consequence – she loses her power to frighten and offend. With every YouTube view, with every tut, with every outraged face, every snigger, even every, ‘Well, I don’t like immigrants but I don’t like her’, her viciousness is undermined. We cease to fear her and start to disregard her (if we ever feared her in the first place). I think that, if we, as a tube carriage, can tut and snort and sing the Pakistani national anthem (maybe?) at every man being a ludicrous idiot and calling another man a ‘towelhead’ whilst the other man goes, ‘Mate, you are so ignorant, that doesn’t even make sense, I’m Hindu bruv’ (also happened), we don’t need to be so afraid.
And then, as the tutting muscles in the roots of our tongue get stronger, we can start tutting disapprovingly at the ‘who wants to suck my dick’ brigade, the ‘I’d like to teabag you when you’re unconscious, sweetheart’ cadre. All over Britain, Europe, THE WORLD, the disapproving tut will signal a threat being rendered harmless. The clicking tongue will be the harbinger of a, ‘That’s not funny,’ or a ‘You shouldn’t say that’. Dissent without aggressive confrontation, in tandem – Caitlin Moran suggested it in How To Be a Woman, and now I’m advocating it on the internet. Fight racism! Fight sexism! Stand up for one another! You won’t even need to get out of your seat!
- KB

8 thoughts on “On Filming Drunken Abuse”