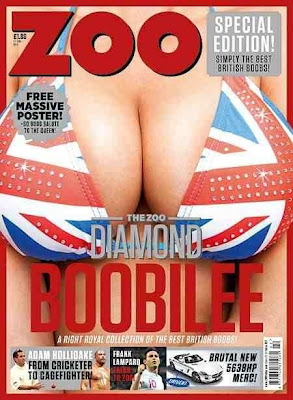 So, yesterday, with our book proposal deadline looming, I decided to take to the Cosmopolitan website for the entirely acceptable purposes of ‘research.’ The first thing I found was this FANTASTIC piece of advice regarding ‘bum fun’ (girl doesn’t want to touch his bum. Cosmo’s advice? Touch his bum)

As top person/journalist Rosamund Urwin pointed out, the pituitary gland is nowhere near the bum. But this might be more down to the fact that Cosmo have their heads up their asses than their scant knowledge of anatomy. One of our twitter followers pointed out that keeping one fingernail shorter than the others for the purposes of anal pokage might look a little bit strange, sort of the opposite of your coke nail, with which it should never be confused. After laughing at this for about two hours I went off to read ’50 great things to do with your boobs’, which contained the following HI-LARIOUS tips:

Score a sexy, rosy glow by dotting on a pinkish-red stain. Dab a small amount around your areolae and nipples, and blend well.

Cook dinner topless, apply a little tomato sauce to your nipple (make sure it’s not too hot), and ask your man if it’s spicy enough.

Draw an attention-grabbing circle around your nipples using rhinestones and body glue for a special night in.

Put temporary tattoos of his name around your nipples, and give him a peek when you bend forward in an undone button-up.

Hide tickets to that baseball game your guy’s been dying to go to in your bra, and tell him to go hunting for hidden treasure.

None of these actually sounded all that fun. So I asked our twitter followers whether they could think of any using the hashtag #boobfun. After a little while it was trending in the United Kingdom, leading it to be corrupted by dicks faster than a virgin at Fresher’s Week. But while it was still good, it made for some extreme MEGALOLZ. Here are the best, brought to you by us, and our lovely readers:

Make a special squishy mould of your breasts for him to play with while you carry on with your normal life. (@bonneth)

Make it your mission to educate your boobs. Take them to a Harold Pinter play (@vagendamagazine)

When your man has had a stressful day at work, manipulate your breasts to act as a Shiatzu massage on his neck! (@georgiamcgraw)

Attach solar panels to your nipples then lie out in the garden topless. Use the power stored to charge his electric shaver (@livburko)

Name them after a well known duo. Examples include Pinky and Perky, Torvil and Dean and Lenin and Trotsky (@notrollergirl)

Insult strangers. If they object, claim your breasts said it (@flossieraptor)

Lean over a piano and run them from lowest to highest note. Wear a bra to avoid chafing (@fi_bradley)

Stuck in the office and need a pick-me-up? Send your boobs to get you an afternoon snack (@pixiefran)

Be a Picasso. Put one of your boobs on your head (@vagendamagazine)

Wait until your man’s asleep, then rest your breasts on his face and shout ‘witness the titness’ in his ear (@flossieraptor)

So there we have it. Some actual fun things to do with your boobs. Follow us on twitter here. Happy Diamond Boobilee everybody!

6 thoughts on “50 Great Things To Do With Your Boobs”