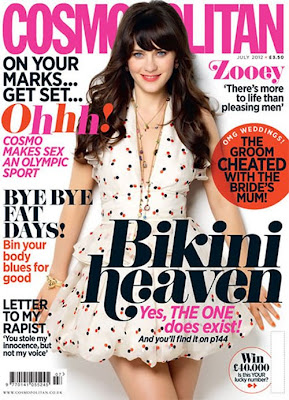 I’m reading Cosmo, as per usual. It’s pretty boring this month. Tbh, anything with OMG WEDDINGS on the front is never going to fill me with hope. But I’m drawn in by ‘Bikini heaven’ and ‘Byebye Fat Days’ so I give the thing a cursory glance.


After a post-colonialist look at ‘tribal prints’ that makes me want to run after the entire editorial team with a spear, we have a discussion of the bigger issues, namely ‘do men really look better with beards?’ It’s good to know that Cosmo are helping their readers engage with the big political questions of the day.

Then we’re on to Men vs Fashion, in which three typical blokes are asked their opinions on a variety of famous laydeez’ ensembles. While Kelly Osborne clearly couldn’t give a fuck what Joe, 26 from St Albans thinks about her hair, YOU need to give a fuck. Before dressing every morning, as a woman in this world, you need to think very carefully about the effects your chosen attire may have on anyone in the vicinity with a penis. So no wacky hair, no crazy prints, no jumpsuits. Don’t go too minimalist though or you’ll be accused by Alex from Essex of being boring. Somewhere in the man-pleasing middle is good. No, I don’t know either…I’m as baffled as you.
Did you know that 40% of men need an hour after sex before they can do it again? Oh, you did? Bummer.
Get new fun facts, Cosmo. I skip past Manthropology because what finding out what Daniel Radcliffe finds sexy or what men think of bralets is not really a priority of mine. By the way, does anyone remember when he decided to become a punk and started talking about the Ramones at that press conference? He was only about 12. LULZ.
Next up we have the viciously consumerist yet technologically current ‘never be tagged in the same look twice’, featuring a stupendously ugly playsuit in a green and purple pattern that I like to call ‘psychedelic vomit swirl’ (TM) Cosmo suggests that you should team it with wedges, because they always want us to team it with wedges and yet no one ever does. You could, instead, ‘be a water baby’ (p.41) and dress from head to toe like a shiny iridescent mermaid. Oooooh pretty! Mermaids! Everyone knows that mermaids get their voices taken away by the seawitch, that they can’t argue back or run away from advertorial because of their flippy floppy tails, then they die. Not a trajectory I’m keen on following, tbh.
In 100% confident, we have a quote from Anne Hathaway about feminism. She says ‘no one has ever been able to tell me that I can’t do something because I’m a girl’. A good thought, I think you’ll agree. Unfortunately Cosmo defecates all over it by adding the tagline ‘not just a pretty face.’ At which point my blood starts boiling more fiercely than a pan of chicken super noodles that has been left on the hob for too long. Thankfully I can relax by reading ‘how to rock a headpiece’, a featurette so empty of meaning that I am lulled back into the sense of mellow hopelessness I came with.
We then have the cover feature, an interview with everyone’s favourite nonentity Zooey Deschanel. It’s unremarkable except for at one point, where the interviewer goes, ‘you’ve been criticised by some so-called feminists for being too girly,’ thus proving in one fell swoop that no one at Cosmo ever does their background research. ‘We all have different qualities, and they’re all equally as good,’ says Zooey, lying on the grass clutching an oversized daisy and not looking remotely girly. That’s right, we do have different qualities. I’m highly judgmental and thus dislike Zooey Deschanel, but thankfully THAT is just as valuable as the quality being like, a kitten, or a rainbow, or a cupcake. So we all win.
Then we have the columnists, and I use the term loosely. Laura Jane MacBeth covers old ground in ‘When being single sucks.’ It’s basically four paragraphs of her moaning about being single, followed by some smug-self satisfied stuff about how great being single really is. According to Laura, you can feel better about being single by focussing on what you have, rather than what you don’t. Namely: ‘That so-cute-it’s-illegal’ new dress’ (who are these cute police, incidentally?) or ‘the underwear that’s essentially stitched together candy floss’ (sounds sticky). Essentially, stuff that lots of people in relationships have too. Because stuff is what makes this dirty little capitalistic world go round. Seriously, though, I was single for nigh on five years and I found solace in plenty of things, but clothes weren’t one of them. Things that were good about being single included drinking alone (an unexpectedly enjoyable pleasure), seeing my friends all the time, not having to worry about dinner, and being able to shag whoever I wanted. Once I turned up drunk to a date after a Jay Z danceathon in my bedroom with one of my girlypals. Half way through the conversation, my date got up and left. I went home embarrassed and thinking that I would die alone, only to have him ring me and go, ‘where are you?’ He’d been in the toilet. The events of that evening provoked a fit of bathroom cry-spewing which my flatmate (and now boyfriend) could hear from the next room. It was at that moment that he thought, ‘now THAT is the woman for me.’ It was a shit evening but it made a good story and that is what being single is all about. The stories.


I suggest Laura goes and takes a page out of my book because her life seems pretty hollow right now.


On the following page the not-so single columnist Jo Usmar makes a ‘shock’ confession: that she doesn’t really ‘get’ kids and would rather look after chickens instead. Yawn. So what? Lots of people don’t like children. Lots of people don’t even like their own children. A mild aversion to children does not a column make. Do better.


It genuinely saddens me that there isn’t more intelligent content in women’s magazines. Instead of reading about any number of the fascinating things that go on in the world every day, we’re taught that we should be interested in Jo and her chickens, or Laura and her sticky undergarments, and ask ourselves questions like ‘CAN YOU WIN A GOLD MEDAL IN MEN?’ (like, duh. I was single for five years.) Cue shit Olympic/sex jokes (‘Is that a javelin in your pocket?’ ‘On your marks, get set…strip!’ I’m not making these up.) It actually makes me want to lie on the floor and cry like I did after that date.