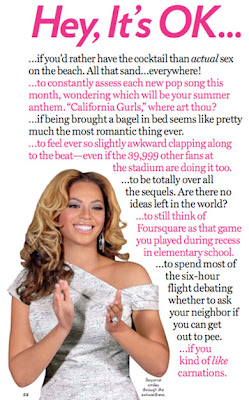 I’m worried about sarcasm. Generally my fall back position as a response to anything, I feel I may have fallen foul of the dictated self deprecation that dominates popular media.
Glamour magazine provides a monthly list of the things it is ’ok’ by them, to do. You have their permission, they’ll turn a blind eye to your fucking female wiles as long as you don’t make a habit of it!
For example “it’s ok to buy a top in three colours, to ’decide which one you like best’. And then not take any of them back”. It’s also “ok to recycle my shampoo bottles, junk mail and Diet Coke cans, but never wear the same party outfit twice”. It’s also, obviously ok, for me to be completely fucking vapid.
I get what they’re doing. Self deprecation lolz. At my expense. I’ve never bought the same top in three colours and then lied about it and I’d have to start drinking Diet Coke to have something to recycle, and in firm denial of dumbing down I am not, completely fucking stupid.
So why do they do it?
Maybe it’s because we’re women and women aren’t funny so we have to constantly put ourselves down? Er, No. That is stupid. “Sarcasm is the lowest form of wit” is bollocks as you can probably tell from my tone and I’m a WOMAN. It is always hilarious, even more so when that sarcasm is pointing out your own flaws for comedic value – I didn’t do self deprecation at GCSE, but if I had I would have failed! See, lolz.
But this isn’t self deprecation for some laughs out loud. This is prescribed psychological self-harm. Thank god it’s ok to not be a hat person because they say so. From now on I shall save my tears as I desperately tug at my titfer. Hat’s aren’t for me and it’s OK!
’Real women’ ad campaigns do it too, aiming to enlighten us with what we really see in the bathroom mirror but really just drawing a circle of shame around our cellulite. “Yeah we’re real women, we recognise we have lumps, bumps, in fact basically our bodies are wrong but we’re drawing attention to it before you can! We KNOW!” Hurrah for the positive reinforcement of negative stereotypes!
Maybe it’s our British-ness, we couldn’t possibly blow our own trumpet, or mention our own self-worth. No, no, it’s far more attractive to draw attention to your flaws with a preemptive strike on anything that sounds vaguely like a compliment and bow down to the media bimbo. You may not take a compliment but don’t worry it’s ok “to expect a guy to offer you a piggyback the minute those heels start hurting”. Of course, because we’re genetically predisposed to wear unsuitable heels.
At this rate we’re going to cause a female stock crash similar to the fiscal fuck up in Europe. Well sod that, judge me all you want but I’ve had enough self deprecation. My worth will not be defined by ‘now with added fabulous’. Hey, I know it’s ok, for me, to read books; sometimes not be bothered to watch the news; wear the same bra two days in a row; eat too much; drink too much; swear too much. I couldn’t care less if I’m a hat person, you’re a hat person, or we’re a whole fucking village of hat people- I have a functioning brain beneath my beanie…not that Glamour recognises it!
- Kate