With miniature-flag-waving ceremonies and who’s-got-the-worst-claustrophobia-in-this-crowd competitions fast approaching, being Queen has never been hipper. Those pastel jackets! Those pastel hats! Those pastel shoes! It’s fair to say that Liz is the biz. Unfortunately, although here at Any Women’s Magazine Ever we’ve been banging on at the royal Press Office for an exclusive interview for months now, we’ve been told that the world’s most famous corgi-lover is far too busy trying to use her royal powers to make Sunday’s weather nice. So we’ve decided to fire one of our reporters into the Underworld, to talk to some former queens of England about sex, shoes and scandal under the right royal crown.
Queen Mary I (reigned 1553-1558) 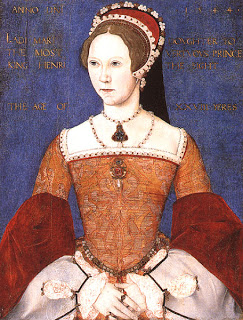 This tasty Tudor was known as ‘Hot Stuff’ for her salacious hobby of burning Protestants at the stake. We ask Mary what it was like being the ugly sister and marrying the King of Spain.
AWME: So, Mary, was Philip a hot-blooded Spaniard in the sack?
Mary: No. Our union was purely political. Having sex with him was about as exciting as signing the marriage treaty all over again, except he did the ‘writing’ with his eyes averted and he used jizz instead of ink.
AWME: Oh. Right. Well, let’s hear more about you and little sister Lizzie! Did you ever feel a bit of a plain Jane next to her?
Mary: Plain Jane? I had her head cut off. What are you talking about?
AWME: Ah, okay… erm… what advice would you give to Elizabeth II on the occasion of her Diamon Jubilee?
Mary: Kill ‘em all.
AWME: Opinions on the drink ‘Bloody Mary’?
Mary: I prefer gin.
Matilda (reigned 1141 for a matter for months)

Empress Matilda put the English people off having a female monarch for hundreds of years – her disputed claim to the throne led to a turbulent civil war through which ‘God and his angels slept’.
AWME: So, no one knows very much about you except that your existence caused a lot of trouble.
Matilda: I accept that.
AWME: Do you want to talk about your arch-rival Stephen of Blois?
Matilda: I will not speak ill of any being.
AWME: Why are you humming and surrounded by blue light?
Matilda: Well, whilst I was running around in the snow and pretending to be a corpse and tirelessly campaigning for my eldest son’s inheritance, God was indeed sleeping. He didn’t answer any of my prayers and I sent some really noble and heartfelt ones. Then when I got to the Underworld I met some really cool people and they were just so chill and moral and relaxed. They showed me that I didn’t need the throne. And I went to a few prayer meets and went to some talks and eventually I converted to Buddhism. I’m working on becoming a bodhisattva, which is why the SFX.
Anne (reigned 1702-1707)

Anne wasn’t ashamed of her curves – she died of suppressed gout and was buried in an almost square coffin. We talk to her about being a seventeenth century bootylicious babe.
AWME: Did you get picked on for being fuller figured?
Anne: I am proud to say that I attended more Cabinet meetings than any of my predecessors or successors. I hope that I have demonstrated that a woman in a phallocentric era can make as worthy a contribution to government as any – wait, what did you just ask me?
AWME: Did you ever face prejudice from your dressmakers because there was more of you to love?
Anne: I was Queen. I wore what I wanted. Are we talking about my reign or what?
AWME: What would you say to today’s yummy mummies, who go from delivery bed to gym as soon as the Caesarean scars have healed?
Anne: Do you want me to say, ‘I had seventeen children, they all died, you don’t know how good you’ve got it, curvy women unite, let’s show them a real post-preggers body’?
AWME: My editor is pushing for that, yes.
Anne: I think it’s their body and it’s their babies and why is this even news.
AWME: Any last words on your lady lumps?
Anne: Get my agent. We need to talk.
Boudicca (c. AD 60)

The queen of the British Iceni tribe, Boudicca was Ice Ice, Baby – hang on a second –
Boudicca: I’ll fucking kill you all! Get it away from me! Back off!
AWME: What’s, er, what’s going on?
Boudicca: The shoes they’re trying to give me! Six inch retro-futuristic paisley platforms! Do you think I can drive a chariot in that? And what the hell is this dress?
AWME: It’s, er, fifties with a twist. The twist is that it is see-through.
Boudicca: Where will I put my spear?
AWME: You don’t need your spear. This is the photo shoot. We just trying to make you look pretty.
Boudicca: Pretty?! Pretty?! I’m the scourge of the Romans! The Warrior Queen! Beloved of the Ancient Gods! I’ll fuck you up if you even touch me with that chiffon!
AWME: Er, the wardrobe assistant just told me you got a vajazzle…
Boudicca: Yes, vajazzles are brilliant ideas! Mine goes up to my navel and is in the shape of a decapitated head. WOMAN POWER. FUCK THE ROMANS. MY MONS IS A VAST RUBY MONSTER.
Victoria (reigned 1837-1901)

A dower dowager whose reign spawned steampunk fashion and Sherlock, Victoria was famous for never being amused and marrying a German. She presided over the world’s largest empire whilst wearing nothing but black and sulking a lot.
AWME: So, Victoria, as the most eligible woman in the Western world, why did you marry boring Prince Albert?
Victoria: He had an absolutely enormous cock and was really into leather.
AWME: Yikes. Right. Let’s talk about your fashion choices. Why only black?
Victoria: Black was easiest. It didn’t show the stains. I spent many, many years in seclusion as the Widow of Windsor when my Albert died. I was in deep mourning, with all that entailed – wild orgies, lots of drugs, crying at 3am whilst naked in a fountain, spanking Benjamin Disraeli with carpet slippers then asking him to read me bedtime stories, drinking whiskey from the bottle, riding servants like ponies whilst dressed as a vampire dominatrix, and so on and so on. The nice thing about being a royal is that you can crash and burn really spectacularly. I made so few public appearances because I usually had the DTs.
AWME: Did it help?
Victoria: Nothing helped. Have you ever been in love? Nothing helped.
AWME: Are you okay to carry on?
Victoria: Yes, sorry, let me just… (blows her nose) We’re fine now, we’ve got a nice cottage called Dunreignin in a very attractive part of the Underworld. It was just, life, you know?
AWME: Let’s talk about your legacy, the Victorian era.
Victoria: Oh man, hell no, I’m not talking about any of that. I didn’t do anything. It was all other people. You guys are crazy, either you don’t let a sister have any credit for her stuff or you give a sister all the credit and turn her into a trope. I was a lover, not a doer.
Elizabeth I (reigned 1558-1603)

This flame-haired temptress was known as the Virgin Queen for never marrying and probably never having sex! How did she manage it?!?! We investigate.
AWME: So –
Elizabeth: Are you about to ask about how I never shagged anyone?
AWME: Well –
Elizabeth: I couldn’t get married because I had teeth in my vagina. TEETH IN MY VAGINA. I didn’t have time for a wedding night because I was FLOSSING THE TEETH IN MY VAGINA. It is very important for the health of your labia and vaginal passage that you floss your vagina dentata regularly.
AWME: Wow, really?!
Elizabeth: No. Bloody hell, I fought the patriarchy for you to focus solely on the state of my hymen? Really?
AWME: You also had some pretty amazing portraits painted.
Elizabeth: Bitches love bling. Especially this bitch. Just because I was a proto-feminist doesn’t mean I didn’t want to look gooooooood.
- Interview KB