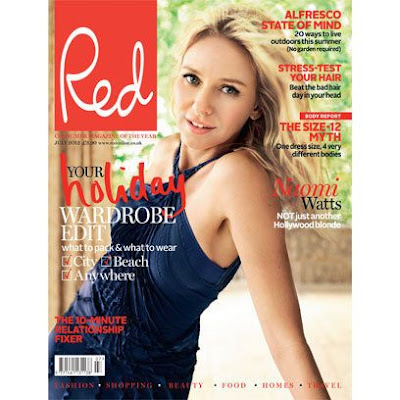 So, I got old this week. Well, 25. But it’s a whole new box I have to tick, people, a WHOLE NEW BOX. And being old, I thought I’d give yummy mummy bible Red Magazine a go. Posited as it is for slightly more mature women, I assumed that this would translate to its content. Yeah. Whatapenis.

Like most women’s magazines, Red is mostly just adverts or clothes placed by PRs. Eventually I get to an article about Naomi Watts entitled ‘Not just another Hollywood blonde’, but I don’t read it because fuck, I’m 25, I’m basically dying, and that’s time in my life I am just never going to get back. Plus, it opens with the words ‘Naomi Watts is the rarest of creatures’. The word ‘creature’ when applied to a woman (and it’s almost always women) is one of my pet hates, along with the phrases ‘of an evening’ and ‘no sugar, I’m sweet enough.’ You’d never hear Johnny Depp referred to as an ‘elegant creature’ or a ‘gorgeous creature’. It just gives me the creeps. ‘Creature’ to me says small and fluffy rodent or insect, or a monster from a 1950s B-movie that lives in the deep and picks off necking teenagers one by one as they dry hump in the back of a Camero near a creek. UGH.
Moving swiftly on, because I need to be at Old Street by 6 ‘o clock and it’s so freaking hot that I’m doing this in my pants. There’s a feature about women who knit their own locally produced chutney or some such, followed by a confessional piece written by a woman who feels guilty for not having been very nice to her disabled brother when they were children. This raises my heckles, as I have a disabled brother and was (and am) perfectly nice to him, thankyouverymuch, so I stop reading otherwise today will end up being one of those ‘sad days’ where I mull over how vile the human race can be and don’t get anything done because I’m crying too much. Yeah.
Instead, I turn to a feature called ’10 minute relationship therapy’, in which a busy woman advises you on how to make the most of your time, which in this case means having a weekly ‘couples meeting’ involving spreadsheets and endless tedium. Whatever works for you, I guess, but it sort of implies that you don’t really have all that much time for each other, which is sad. ‘The message to your partner is that ‘us’ is important enough to clear time in your schedules for’, she says, as my girlish dreams of a romantic relationship involving regular face to face communication, not to mention cuddles, die a little. Maybe I’m just not busy enough, but to me having to structure your relationship in such a way, as though it’s just another thing to fit in, sandwiched between a six o clock meeting and a perfunctory shag, makes me miss the giddy days when all that occupied your mind was that quick, frisson-charged fingering round the back of Bargain Booze. Spontaneity is the bread and butter of life.


Next up, we have ‘Cool, clever and clueless’, in which ‘savvy women’ reveal really stupid things that they have done (e.g. asking questions like ‘is a duck a bird?’). It’s an exercise in the self-deprecating humour that women often feel the need to engage in to be funny – ‘haha look how silly we are!’ – and presumably makes the reader feel better about all the stupid shit they do on a daily basis. It doesn’t make me feel better so much as dead inside, but hey, ho, it warms me up nicely for: FRIENDSHIP TOP TRUMPS. Like most magazines, Red seems to like turning something that isn’t a thing into like, a thing. In this case engaging in a bit of schadenfreude regarding your besties ( e.g. their poor relationship making you feel better about their career success, their gorgeous boyfriend compensated by the recent death of their beloved chinchilla, ad infinitum…) Considering that most magazines are essentially fabricated in a schadenfreude factory (I imagine it as a kind of Orwellian dystopia in which everyone wears grey jumpsuits and laughs when your grandma dies) I shouldn’t be too surprised by this article. But it’s this writer’s sheer ‘honesty’ about being a complete and utter ladybastard. ‘This is something we all do’ she is trying to say, probably to make herself feel better about the fact that none of her friends invite her to dinner parties anymore, but it patently isn’t. When one of my friends gets an awesome boyfriend or an amazing dream job it makes me light up with joy at the thought of the universe being so fucking wonderful, and knowing our lovely Vagenda readers, I’m sure you’re the same.


Some of my extended social group are currently in the process of snogging and/or shagging some of my 14 year old rock heroes. We’re talking famous guitar-playing boys I dreamed and lusted over for hours during my budding adolescence. I should technically hate them, but I don’t, I just think ‘fair play, love’, and have another cigarette. So when Ms Worst Friend Ever says ‘could you look me in the eye and say you’ve never done the same?’ the answer is, ‘yes I could, because I make a conscious effort not to be a dick to people’. ‘I can cope with someone’s brilliance in some areas, as long as they’re not perfect in all of them’ says Ms Sorry We Thought We’d Told You About the Party on Saturday But We Actually Didn’t. Fuck that. The more brilliant your friends, the more likely it is to rub off on you. Be gone!


I flick through the organic recipes and the feature on how to make your garden into a smug relaxation space until I get to the health pages. This is where the shit gets really fucked up.
‘If you only do one thing this month…blow up some balloons’ says Red. Appaz, this is an ‘incredible exercise for flattening your stomach.’ If this is indeed the case, how come the balloon men at children’s parties are always tubby? I’m also confused as to why you have to stand in front of a mirror while doing the exercise. Did I miss something? Are puffy blowfish hamster cheeks in this season? WINNER. For more tips in this regard, you can buy the book ‘Six weeks to OMG’. The title says it all really. Twats.


Then we have ‘Size 12, inside and out’, in which Red fat shames a load of women who look perfectly healthy, not to mention hot, by giving them (and I can’t believe I’m typing this) a ‘Body MOT’. Nice. Natasha, for example, has a healthy BMI of 21.3 yet is told to swap ‘chocolates and biscuits for a raw bar.’ Katie, who goes to the gym, eats a balanced healthy diet, and has a normal BMI (although her ‘fat mass’, whatever the fuck that is, is ‘over’) is told she should also do yoga, probably won’t get pregnant unless she loses more weight, and should ditch the biscuits for vegetable crudites and houmous. Basically, anything fun that these women are currently doing should be swapped with Kale. It’s a horrible feature which makes me want to hit personal trainer Nicola Addison in the face with a deep pan pizza while dancing around in front of her singing ‘I had four french fancies last night lalalalalalala’. Are women just not allowed to have fun anymore, I ask you? All these women are beautiful just as they are, and yet, according to Red, it’s still not good enough.


I end my odyssey into yummy mummy land by reading ‘eat like a calm person’, an article which is more middle class that Primrose Hill baby yoga. ‘I realised that I’d eaten two dinners without even thinking about it’, confesses Viv. Sounds immense, if you ask me. But not for Viv, who decided to become a ‘mindful’ eater. It basically involves meditating to help control your food cravings, and is one of the most persuasive arguments for class war that I have ever come across. It’s mind-numbingly tedious and saps all the enjoyment out of eating. Don’t buy this shit, seriously. This is one of the worst magazines I’ve ever reviewed. I would recommend that Vagenda readers (that’s you), follow my ‘mindful reading’ plan (TM) instead. Sit with the magazine in front of you. Don’t touch the magazine. Breathe in and out. Think about whether or not you really want to read the magazine. Then, when you have reached inner peace, tear the magazine up into a million tiny pieces and either eat them for sustenance or put them in the recycling. There, the only health advice you’ll ever need.