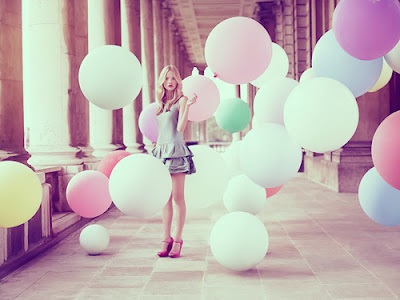 Woah there, hipsters. Before you jump down my throat faster than an ice cream shaped cakesickle hybrid, I’m not about to say that I want to kill Belle & Sebastian. I quite like Belle & Sebastian, when I’m in the right frame of mind. But all this twee shit really has got to stop.
Twee is defined as ‘excessively sentimental, sweet, or pretty’, but is also a musical genre with its roots lying in the famous C86 tape. It’s the jingly jangly indie pop of the Magnetic Fields, Beat Happening, Camera Obscura, et al. A genre which, while once good, has now permeated every aspect of modern culture (or at least, modern culture for those under thirty.)
If you ride to work on a pink bike, have a picture cluster in your bedroom, listen to vinyl records, stand around in a tea dress holding a heart shaped balloon, have your own cupcakery, think ‘Keep Calm and Carry On’ posters are charmingly nostalgic, use instagram, think people who use instagram are wannabes because you have your own polaroid camera, go to things that have bunting, collect vintage china and take an unhealthy interest in typography, then you are probably pretty fucking twee. You probably think heart-shape sunglasses are pretty cute and that Lolita by Nabokov wasn’t even that pervy. Time to stop.
So why all the twee anger? Surely this is just another blog post about hating on hipsters, right? Which means you must just be jealous that you’re not a hipster yourself? Wrong, dear reader. Firstly, this is so much worse than your ordinary, workaday hipster vibe. This is pop culture taken to vomitous, nauseating, ubiquitous heights. Plus, I’m 25 in four days time. You can not physically be a hipster after you are 25. Hipsterdom is the territory of the young. After that age you are definitely supposed to be an adult, with fully formed opinions and a personality, so mindlessly following an ill-defined youth subculture that is actually pretty consumerist and mainstream starts to look a teensy bit sad. Which brings me to yesterday.
We went to a launch thing yesterday that was the ultimate in all things twee. I won’t say where as it wouldn’t be fair on the participants, but as I sipped on my coconut rum flavoured pink cocktail in the basement of an analog camera store and listened to the jingling of a two-piece band singing about a love accompanied by a tambourine, it struck me that twee had reached its apex. No one, in the whole world, could be doing anything as twee as what I was doing right that moment. There was LITERALLY nowhere that twee could go from this. I contemplated this as I chewed on my sherbet filled flying saucer and lustfully eyed up a guy in the corner, not because he was handsome but because he was drinking a beer.
Twee is very much a girl thing. It has a creepy childhood nostalgia about it that makes me very uncomfortable. It’s as though if you eat enough marshmallows and put enough flowers in your hair all your adult problems will go away. You can’t really be a twee grown-up, with a job and a mortgage and oddball sexual fetishes. The two just don’t compute. Yet more and more we’re seeing this tweeness infiltrate the minds of ordinarily intelligent people. Suddenly everyone wants to be a fifties housewife and is going to Crafternoons, eating macaroons, and doing other things ending in ‘oon.’ It’s not normal.
There are certain things that go hand in hand with becoming an adult and one of them is learning not to let this stuff affect your identity. This can be taken as a more general point with regards to any ‘trend’ but is especially important when it comes to women and the twee explosion. From what I saw last night, women are actually in danger of turning themselves into real life Manic Pixie Dreamgirls and not living breathing entities with thoughts and ideas and opinions. Twee girls don’t have screaming political arguments about capitalism at dinner parties. Twee girls don’t do shots, or have zipless fucks, or basically do anything fun. I’m not saying that because you enjoy knitting or baking that you’re some kind of traitor to the feminist cause, but when your identity is so wrapped up in it that you’re beginning to become an archetype then that’s when there’s trouble a-brewing.
I have no doubt that twee will die a death of its own accord and the young ‘uns will move on to something equally meaningless to occupy their empty days with, but until that happens, maybe help hurry things along a bit by not using fonts with names such as ‘peach sundress’ and acknowledging that, London traffic being the way it is, it’s probably safer to have a bike with brakes. Twee may seem inoffensive and innocent, but it’s become so ubiquitous now that it’s in danger of hijacking anything genuinely subversive. Of course, I’m not going to preach to you about how its alternative credentials are a sham and that it is just as capitalistic as running around Mahikis with a bottle of Cristal while pointing at your vajazzle. You’re a clever girl, you know this already. But at the same time, from the looks of it, it’s quite fun being a woman, and you can’t really be a proper woman if you have to go home with a tummy ache from all the sickly pink cocktails, cookies and sweeties you ingested. Which is what happened to us yesterday. Yeah. Twee made us physically sick.

34 thoughts on “Why Twee Needs to Die a Death”