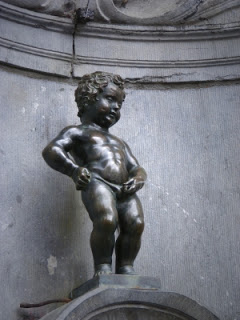 Have you ever squatted? This question was asked of me while I was on holiday in Belgium  recently, and it was prompted by a strange situation at one of their annual festivals. The enlightened city of Ghent provides a fair few ‘tasteful’ open-air urinals, which provide a little more privacy than your average central London effort, and (somewhat) prevent the stream of male piss that usually accompanies outdoor music and alcohol. Meanwhile, the local bars cash in by charging everyone an average of 50 cents to use the toilet facilities – effectively meaning that men are provided for for free, and women are forced to pay every time for beer-related relief.

The women of Ghent have been vocal about this for a number of years. Last year, they even brought up a Belgian court case, which, somewhat strangely, they lost. According to local reporting, the deciding judge declared that ‘men are pigs who will urinate on national monuments if not provided for’, while women, as a supposedly more civilised race, can be counted on to act a little more decently and therefore must make the necessary sacrifice. After all, it would be way too complicated to provide toilets for both sexes – right? Imagine an establishment that did THAT. Yeah. Crazy. I just blew your mind.

Obviously, we know that men are not pigs. At least, the ratio of swine to decent human beings is pretty balanced in each gender, as far as I can make out. But there’s no doubt that it IS more common to see a bloke furtively getting out his willy by a tree trunk than it is to see a woman squatting down in the local foliage. Sure, the appendage is more accessible for a man, and the position a bit easier. But bar a little bit of knicker-rearranging and having to forgo the luxuries of loo roll, squatting down to pee is hardly a major inconvenience for women outweighed by the major inconvenience of a bursting bladder. So why are we so much more reluctant to do the deed when nature calls?

Now, I’m not advocating that we all start streams in the streets – let me clarify that this is a bad habit and indeed something that should not be a habit at all. But it happens, and apparently the only way to equalise Ghent’s situation is to make sure it happens a lot more from the girls’ team. So anyone out there who’s an occasional squatter needs to get involved – with your voices or your urethras, I’m not too fussed.

Things have been done in the past to try and even up the pissing imbalance between men and women, but as in most areas, progress remains a little bit stilted. The notorious SheeWee – a cardboard funnel to place over your vaj and give you a penis-like aim for the purpose of ‘female urinals’ – exists, but is disliked by 90% of the female population (an entirely spurious statistic that I came up with after a brief ask-around of friends.) Optimistic standing-to-pee types give them out every time Glastonbury rolls around, promising impossible riches and revelations, but all you end up with is a soggy cardboard cup and a fistful of your own pee in a field utterly devoid of hand-washing provisions. Willing to take that risk? Wouldn’t you rather squat down in the nearest hedge and be done with it? Thought so.

Squat toilets – common in Asia, if you’ve ever gone backpacking and been freaked out by what you saw behind the cubicle door; not so common in Europe, where we raise our asses unnaturally high off the ground to do our business – may be a solution here. Or perhaps a celebration of the undignified female pissing experience. Or perhaps, most sensibly, Ghent needs to stop pouring money into providing more troughs for the men that they think are pigs, and put up a fuckload of free unisex cubicles instead. That way, we all get to choose the way we pee, and none of us have to pay to let our bodies function in the way they were intended (you know, after we consume copious amounts of fermented grapes and hops to the point of extreme intoxication, just like the Earth God said we should.) But either way, in a world where transgender toilets in schools are now being implemented with only the occasional hiccup, are we really stupid enough to divide the lasses and lads at one of the biggest festivals in Europe according to their peeing style?

Women were the original squatters; some of them are SheeWee converts; some men love to sit. And we can’t fall victim to the stereotype of ourselves as ‘the fairer sex’ in any situation, no matter how trivial it is. We’re pigs as well and we’re proud – and we’re not afraid to get our fannies out if you don’t provide us with doors to lock them behind.

5 thoughts on “Women: The Original Squatters”