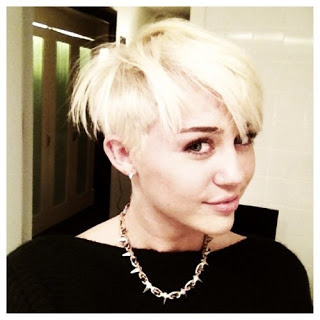 Like everyone else who is done with puberty and has managed to cling onto a sense of proportion, I don’t take a lot of interest in Miley Cyrus, the former Disney star who is apparently corrupting millions of young girls by wearing bikinis and smoking legal substances. Yesterday, however, even I was made aware of her latest highly publicised decision: to cut off her long hair.

My initial reaction to this information was, “Who cares?” but quite a lot of people did care and these people had no hesitation is expressing their disgust at this fashion choice. “Miley Cyrus is now a boy … I thought she was getting married but I guess now she changed her mind and she’s a male” said one YouTube user, who I’m assuming was never told that having a haircut isn’t the same as having a sex change operation (or, indeed, that men can actually marry other men in some places). A mock Twitter account of Severus Snape joked that Cyrus was “trying to look like Draco Malfoy”. The internet seemed to be unanimous: you can’t be a woman and have short hair at the same time. Sorry, Miley; we’re going to have to revoke your vagina. Your new penis will arrive by first class post in 4-5 working days. In the meantime, you might want to do something about those breasts.
However, it soon became apparent that it was not just Ms Cyrus’s appearance that was causing the Twitter users of the world to take to their keyboards. According to Twitter (and if we can all agree on anything it is that information found on Twitter is always utterly infallible) the hair she cut off was donated to a cancer charity. Donating to charity is great and, if this is true, I’m pleased that Cyrus chose to support a good cause. For the users of Twitter, this changed everything. Soon I was seeing posts like:

That’s right, folks. She might have committed the terrible misdeed of cutting the hair that grows on her own head but she’s redeemed herself by raising some money for charity. Presumably, these people believe that if she’d cut her hair because she thought it might look nice (the horror!) then calling her ugly and questioning her gender would be perfectly justified. So if we want to be horrible about a girl’s appearance then we just have to pick one who doesn’t have the means to make big charity donations.
I can’t say I am particularly shocked that the internet feels that a pretty, young girl has to justify cutting her hair off. It goes without saying that long hair has been associated with femininity for as long as anyone can remember. I could probably count the number of women I know who have cropped hair on one hand, while the friends who wear theirs at elbow-length are the ones whose hair receives the most compliments. You might see the occasional fashion magazines might praise the pixie cuts of actresses like Michelle Williams or Carey Mulligan, but most of the women we are told to aspire to look like have hair that looks like it should be being swished around in shampoo adverts, as do the women who top the countless “Sexiest Woman” polls in men’s magazines. As the enlightened and thought-provoking woman in the above mentioned video says, if you want to be a woman you have to have “long, beautiful, luscious hair”. Actress Emma Watson, who had her long, wavy hair cut into a pixie crop in August 2010, has said that her short hair made it more difficult to find acting roles and even prompted journalists to ask her whether she was coming out of the closet. When actresses like Watson and Cyrus, who found fame playing wholesome characters when they were only children themselves, cut their hair off, we are told that they are “shedding their good girl image”. The media convinces us that cropping your hair is a career move, a publicity stunt. These women can’t possibly think this looks good, so they must be doing it for another reason.
Frankly, this is utter bollocks. Cyrus’s haircut is just that: a haircut. It’s not a rejection of femininity, it’s not a political statement and it’s certainly not an attempt to change gender. It’s a haircut. The boys-have-short-hair-girls-have-long-hair mentality may be ingrained but I think, deep down, we all know it’s ridiculous. The person who presented Tilda Swinton with her Academy Award didn’t say, “Hang on a moment, this is the award for Best Supporting Actress but you’re clearly a man. Go and sit down, you short-haired fraud; we’re giving this to Jessica Alba because she has proper girl hair.” No one is going to question Annie Lennox’s position as the female artist to have won the most Brit Awards just because of her short, “unfeminine” haircut. And sometimes men even defy this convention too! Take Viggo Mortensen as Aragorn in Lord of the Rings, Johnny Depp as Jack Sparrow in Pirates of the Caribbean or Chris Hemsworth as the title character of Thor. All these characters have long hair, but are they accused of being women? No. They are strong characters, fighters, and also considered to be very, very attractive by a lot of people. Do we ignore the fact that Aragorn is a brave and skilled warrior just because he has “long girl hair”? No.
When a woman in the limelight makes a big change to her appearance it always comes under scrutiny but cutting off long hair is always seen as one of the most radical things a woman can do to their appearances. Rihanna and Katy Perry dye their hair colours that don’t even feature on the spectrum of natural human hair colour and they still get less attention for it than Miley Cyrus has with this haircut. More to the point, the public seems to decide that any woman who crops her hair must want to look like a boy and therefore has opened herself to being fairly mocked and ridiculed – unless she did it for a good cause, of course.
Well, no, actually, that’s not how it works. If you are willing to make spiteful comments about a woman, even go so far as to question her gender and sexuality, because of her hairstyle then you’re a nasty person. Even if you take back your mean comments when you find out the person you’re insulting did something nice, you’re still a nasty person, now with added hypocrisy. When a woman breaks one of the conventions of femininity that you so desperately cling to, she’s not wronged you in any way.
Cyrus is clearly pleased with her haircut, as she has posted several photos of herself since she changed it and has tweeted that she has “never felt more me in my whole life” and feels “so happy and pretty”. Why isn’t this a good enough reason for her to cut their hair? Why do people feel that we accept this hairstyle because of her alleged charity donation rather than the fact that she is happy with how she looks? Ultimately, if the hair isn’t attached to your head then you don’t get to decide what happens to it. Women shouldn’t have to make charity donations in order to justify a haircut.