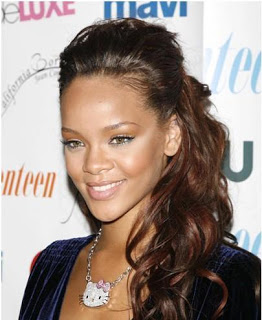 I was 20 years old when I got my first weave. I’ve always used hair extensions, since I was a little girl. I’d have my hair braided into extensions and wear my hair in long braids. The weave I got was sewn into most of my hair and I’d used my own relaxed hair to cover the tracks so you couldn’t see where it was sewn in.
I’d love to be able to wear my hair in its natural afro state but for several reasons I don’t. Firstly, I’d have to learn how to maintain an afro. Secondly, I’d have to cut all my natural hair off again and start again as all my natural hair is chemically straightened using a relaxer. Thirdly, I just don’t have the confidence to wear my hair naturally yet, not just in an afro but without added volume or length.
When I was in school sometimes other black girls would tease me about my hair, which had been wrecked by relaxers and hair dying. It wasn’t long and I’d sometimes not relax it in ample time so it’d be half afro and half relaxed. They’d often call me ‘Picky head’ to insult me, which is sad because they had the same kind of afro hair I had. I guess it was externalised self hate of sorts.
I started secondary school in 1997 and finished in 2002 and decided to pursue my A-levels in college. I needed a fresh start. My grandparents are from Africa and most of the other black girls I schooled with were West Indian, originally from the Caribbean. So there was already a rivalry, a bit like Indians and Pakistanis. We look slightly different to each other too, though I am mostly assumed to be West Indian by Africans and West Indians. Back then some West Indians I schooled with, not all, mind, saw me and other Africans as primitive and less attractive than themselves and would use racist taunts on me. I got called ‘Rubber lips’ or ‘Picky head’ (as well as some fat insults), they would mock racial characteristics of mine which they had too. Back then the least African a black person looked was seen as better, I guess.
I had low self esteem for many years, I now live with body dysmorphia which has gotten better with therapy but I am still very into appearance. I guess I like to be considered attractive and I feel more attractive wearing a wig or weave, which is a shame because it is not my natural state. I guess as someone who has body dysmorphia I worry I’ll get less male attention if I am without a wig/weave and sometimes I need male attention to not feel down about my appearance.
I like to stand out but I like to blend it at the same time, and will get questions about my hair from strangers, asking whether it’s natural. I did some studying in Romania when at university and every second person stopped me in the street to ask why my hair wasn’t curly. I was wearing a light brown/dark blonde whole head weave at the time and it’d be the same here if I wore an afro. Ever since my hair fell out and I was teased about it I’ve been shy of it and so only my hairdresser or immediate family have seen me without a wig, except in one photo I posted online. No boyfriend has ever seen me without fake hair. I love the Kardashians and how they’ve made long hair into a brand so they inspire my look now. The notion of beauty has changed because of them, they’re more exotic looking, much more similar to me than famous women before them, more curvy and more non European looking to be honest.
Summer 2007 is the only time I haven’t worn any hair extensions/wigs/weaves since I turned 20 in July 2006. And the only reason for that is; I was saving up to go to Australia. Just before I went to Australia, I got a weave, this time a whole head weave so not even my own hair was visible. I got it cut into the style of the Rihanna bob, seen in her video ‘Umbrella’.
Since 2009, though, I have liked giving my hair volume and length, so underneath wigs or weaves I often stuff fake hair to create volume as hairspray can only do so much.
I like buying wigs and going wig shopping and will probably continue to wear weaves and wigs until my hair is at a length I like. It’s currently just at the base of my neck but when chemically relaxed it’s very fine and unable to be volumised. My hair is also brown, I love jet black hair so buy jet black wigs, although I own one honey blonde one that I rarely wear. I think I feel more feminine in my wigs or weaves, knowing I have this body of hair gives me a lot of confidence. Having a weave makes me feel more feminine. I’ve never been comfortable with my natural hair, and don’t get me wrong, I love the look or I wouldn’t be doing it, but this is quite heavy stuff that I’m putting on my head. I just wish that I could wear my own hair out, but I’m always going to be paranoid about people making fun of it.
- JK

6 thoughts on “Me and My Weave”