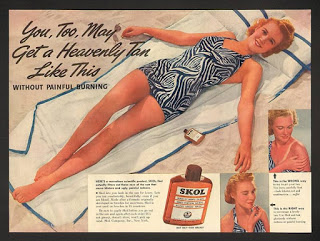 I’ve worried about my skin colour since I first tied my tie wrong, pulled on my secondary school blazer, finished the latest copy of Mizz and had my year seven nickname – ‘Ghost’ – shouted at me from further down the hallway. Awkward, dark-haired, luminously pale-skinned in a chronically anaemic rather than radiant way, I stood out like a sore thumb amongst hundreds of girls who either had the apparently good fortune of Spanish or Indian or Nigerian parents, or had had the decency to discover fake tan.

I should have embraced Ghost, but instead I fought against it for years. When I was thirteen and on my way to a family wedding in the summer, my mother advised me to use her tanning gel ‘just to get a bit of colour.’  But after a brief, flaky encounter with a can of St Tropez that turned me an even worse-looking colour than before, I swore off the bottle – and from then onwards, the cruel choice for someone of my skin tone seemed to be a pallid pallor or a humiliating shade of Obviously Fake. Bronzer was offered up to me in make-up stores when I started painting my face for fun, as consultants tutted over my unfortunate foundation match: invariably ’00’, ‘porcelain’, or some other snide euphemism for melaninically challenged. ‘But you don’t LOOK like you’ve been on holiday!’ was the ever-present cry after I returned from a fortnight in the forty degree heat of Ibiza; or, in the only other eventuality: ‘My God! Shouldn’t you see a doctor about those terrible burns?’

I will admit, now that the shame has somewhat abated with age, that I once switched my factor 40 sun cream (bought by Mum) for factor 5 ‘carrot oil’ that basically reduced me to a scarlet piece of flesh slowly grilling to a crisp on the beach when I was 14. Equally, I will admit now that my fear of blushing such an incredibly obvious shade of blotchy crimson during public speaking prevented me from pursuing a love of Drama altogether. My mother’s description of my ‘unhealthy’ legs meant that I still wear skin-coloured tights in blistering heat; my peers’ insistence that I was so ashen in hue that I must have something wrong with me actually led to a couple of fruitless months on iron pills. Strangely, a little extra iron failed to transform me into a Mila Kunis lookalike, and I remained snow white well into my twenties.

The idea that I am incredibly, unchangeably pale dogged me well after I had come to accept that I would never be good at maths, never be able to dance unselfconsciously, never meet David Bowie, never fool everyone into thinking that I had written One Hundred Years of Solitude under a pseudonym. It seemed bizarre when I moved in with my Filipino roommate at university, whose parents kept sending her ‘extra whitening’ facewash that jostled in our shared bathroom against my unused bottle of ‘Sun-Kissed Look’ moisturiser, courtesy of my own mother. But it didn’t stop us from lamenting our individual fates, while both coveting the perfect shade of Italian mid-brown that had been sanctioned and rubber-stamped by society as the right colour to be: the sexy, flirty, well-bred, natural, healthy way to be.

It’s the ‘healthy’ part that I object to the most. Yes, it may have worked wonders for me with the school nurse (on so many occasions that I really think the poor woman must have suffered from a memory deficiency) but seriously, guys – there’s nothing wrong with me. I’m not anaemic, I’m not reclusive, I’m not even ‘coming down with something.’ I am just the result of a long line of Scottish and Irish relatives who herded sheep and didn’t even once go on holiday to Florida. And in the great scheme of things, I know I’m not being socially ostracised in India for the wrong skin tone, or battling racial perceptions in the Western workplace. I know I can’t complain too long or loud without being shouted down by somebody else with, let’s face it, real problems. But still, how long do I have to take the whole ‘gross white legs’ routine with a self-effacing smile, come the first sun of April? Dude, these are my legs, and you’re not going to make me change them. They are attached to my torso, and therefore it would be normal for them to match the rest of my body. Get your greasy fake-tanned hands off my alabaster assets.

As is their wont, beauty ‘experts’ around the world have come up with all sorts of frightening solutions to my first world problem in the last decade, including the introduction of ‘tanning pills.’ These bad boys ended up having some pretty frightening side effects, so were heavily discouraged (and, er, publicised) in the media not long after their appearance on the market. Tabloids rolled out enough teens who thought it was ‘totally worth it’ to tell us everything we need to know, though. Nowadays, after a few spurious improvements, you can buy them in supposedly respectable places like Holland and Barrett (and pick up a tyre-sized can of ‘protein supplements’ for your six pack while you’re at it.) And the advertisements surrounding them admonish you to ‘get a little bit of colour’ the way every magazine columnist ‘suggested’ that I should in Mizz and its older sisters, while cheerily eroding my teenage self esteem. ‘Get a little bit of colour’ indeed.

Well, listen. I blush harder than anybody I know. My arteries stand out bright blue against my skin. Every time I get burnt by the sun’s unforgiving rays, I acquire a few more different coloured freckles. And believe you me, every tiny blemish that I develop – every ugly whitehead I have to layer on ‘porcelain’ make-up to disguise – is framed beautifully by this icy exterior. What am I trying to say? Basically, I have too much colour the way I am already – and I’m sick of trying to look like my parents conceived me during a beach-based love affair in their wholesome hometowns somewhere deep in South America, probably to the beat of some totally authentic local music. Let’s take a step back and hear it for my ancestors, the sheep-herders who kept a lineage going by shagging under sheepskin in a rain-soaked cave. Their efforts may not have lent me the ‘bikini-ready bod’ sported by the radiant Beyoncé – and yes, ‘being transparent’ may be more of a daily physical occurrence for me than an emotional effort on a problem page – but I’m here and I’m clear, so get used to it.

13 thoughts on “Memoirs of a Ghost”