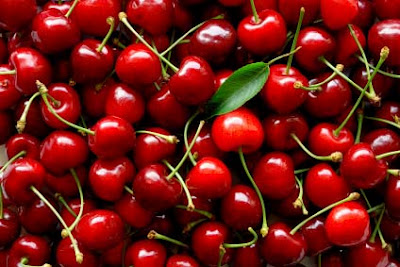 This glam-tastic belter of a teenage rallying cry had to top our list of cherry-busting anthems. A song written by girls, about girls, sang by girls, The Runaways’ Cherry Bomb is practically masterful in its sheer empowerment and claim for ownership of teen lust, largely thanks to Joan Jett’s lyrics. ‘Bridget Bardot in a trailer park’ lead singer Cherie Currie hollers, ‘I’ll give you something to live for/ Have ya and grab ya till you’re sore!’ making for a rebellious claim for burgeoning teenage femininity in an era dominated by male musicians. With its irresistible ‘ch-ch-ch-ch-ch-ch-ch-cherry bomb’ chant and a monster of a ch-ch-ch-ch-ch-ch-ch-chugging beat, this is the Runaway’s trademark song, though, in all honesty, we could have picked any number of tracks from their self-titled debut of 1976 (You Drive Me Wild, Thunder, Lovers). At any rate, what’s so important about Cherry Bomb is its absolute and uncompromising possession of an, as yet unsettled, female sexuality. Unlike so many of the songs about virginity that aim to come from a female perspective, Cherry Bomb is not a traumatic ode to lost innocence but rather a fearless and actively positive assertion of gain. Watch the following footage of the band in Japan and commence sticking posters of The Runaways on your wall. Oh, and buy a basque.
2. Madonna – Like a Virgin
It had to happen. Although a friend of mine has pointed out that it’s ‘like a virgin’ rather than just ‘a virgin’

3. Pulp – Underwear
Although Pulp’s Do You Remember the First Time? is a more obvious choice here, Underwear is an extremely worthy addition to our playlist, detail as it does the experience of a man watching the girl he wants cop off with someone else, and not in a footloose and fancy-free sort of way. In spite of its woozy opening synthesizers and opening chord progressions, it’s heart-breaking in parts, and more than a little harrowing at times, explicating in delicate terms a sense of anxiety surrounding ‘giving yourself’ to someone. The sensitivity to the fear of exposure capitalised in the underwear analogy is wonderfully executed, almost as though Jarvis Cocker himself is watching a painful drama unfold from inside a wardrobe (cue R. Kelly’s ‘Trapped in the Closet’ saga).

5. The Boys – First Time
The Boys emerged from the first wave of London punk back in the mid 1970s…and pretty much stayed there, producing a handful of singles and a thoroughly decent self-titled album that never got the recognition it deserved. I lent my copy to a dirty Swedish guitarist and never got it back. Lesson learnt. Indeed, in contrast to a lot of the obnoxious punk floating around at the time, The Boys were a little more earnest in their use of melodic song structure and narrative and this song is true testament to that ethos. It tells the story of a boy who meets a girl at a dance and takes her home, only for her to confess that it’s her first time, asking him to ‘be kind’ and not hurt her. The stand-out lyric? His gallant response to the listener: ‘I didn’t know what to say/ I didn’t want to hurt in any way/Then I looked in those big brown eyes/Filled with tears she tried to hide.’ This is a genuinely brilliant piece of song-writing, dealing with the topic with sensitivity and musical finesse, but without being mawkish or overtly sentimental.

6. Elvis Costello – Mystery Dance
Kudos to the brilliant Elvis Costello for this, his wonderful and naive euphemism for sex: the mystery dance. Taken from his debut album, My Aim is True, of 1977, the song displays a sense of desperate frustration and inexperience on the part of both male and female characters (‘Romeo and Juliet’) which is why it has been included on the Vagenda’s playlist. Musically, it starts like Elvis Presley’s Jailhouse Rock but then loses all bravado and pelvis action through Elvis Costello’s ever-neurotic song-writing about not knowing how to ‘do the mystery dance’ with a girl. By setting his lyrics to a killer piece of rock and roll, which is totally at odds with the anxiety that frames the story, Costello successfully mirrors the sentiments in the song about pretending you know what you’re doing when you don’t:
‘Well I remember when the lights went out, and I was tryin’ to make it look like it was never in doubt/ She thought that I knew, and I thought that she knew/
So both of us were willing, but we didn’t know how to do it.’

7. The Shirelles – Will You Love Me Tomorrow
‘Tonight you’re mine completely/ You give your love so sweetly/
Tonight, the light, of love is in your eyes/ But will you love me tomorrow?’
For a group branded as the epitome of girlie pop, this hit song from 1960 is pretty dark when you think about it. Although you might choose to interpret it more generally with regards come-and-go affection in a relationship, it does seem to convey the fear that after ‘the night’ is over, the love won’t be there in the morning. Indeed, at the time of its release, some radio stations refused to play it because they felt that the lyrics were too sexually charged:
‘Is this a lasting treasure/ Or just a moment’s pleasure?
Can I believe the magic of your sighs?/ Will you still love me tomorrow?’
Indeed, I see it in a kind of dialogue with something Rita Hayworth used to say when she spoke about the way her male admirers would so often conflate her screen roles with her real self: ‘They go to bed with Gilda, they wake up with me.’ Much like Hayworth seems to suggest here that, in the passing of a night, the dream screen vixen disappears to leave a reality that is supposedly less desirable, Will You Love Me Tomorrow relays an all-too common anxiety about fleeting, temporary or even superficial, affection and its disappearance overnight.

8. The Four Seasons – December 1963 (Oh What A Night)
This Four Seasons disco classic was originally about prohibition, but it soon became perceived to be about a young man’s first time with a woman. Admittedly, it’s not so closely about the female experience, but it evokes a sense of admiration for the woman in question, that unmistakeable piano riff providing a jolly soundtrack to a night in a club and its end-note. I love the fact that it’s one of those hugely well-known ‘classic golden oldies’ and that it manages to use a certain amount of lyrical ambiguity to mask potentially controversial and confessional comments such as ‘as I recall, it ended much too soon.’

9. The Pretenders – Tattooed Love Boys
Chrissie Hynde is just awesome. Forget Nick Kent, Hynde was probably the seminal rock and roll-nomad-NME journalist-musician in punk London, dabbling in a number of ‘bands’, the line-ups in which never seemed to last more than a week. I even read that, at one point, she was all set to lead the fledgling group of what would later become the Sex Pistols, only she wanted the band to be called ‘Mike Hunt’s Honourable Discharge’. However, it was as frontwoman for The Pretenders that she really made her mark on the music world and Tattooed Love Boys was a 1979 single release that later featured on their eponymous debut of 1980. It’s a classic example of their chipper and robust rock and roll, with all the momentum of a runaway freight train and none of the carnage. Those dizzying guitar riffs slide amongst Chrissie’s assertive account of when ‘the time came to explore’ in what is seemingly a highly autobiographical insight into her sexual history. It’s an incredibly honest vocal performance and made all the better for it, and there are plenty of laughs too, what with the hilarious tyre shop setting where a man ‘showed me what the hole was for’. Ultimately, this constitutes a real demonstration of female assertion, especially since the song is so obviously about Chrissie and its being played by an all-male band, fronted by her.
10. Basically all of Air’s soundtrack to The Virgin Suicides
Playground Love probably defines this incredible score by French electronic dream pop duo, Air, and is the perfect accompaniment to the beautiful golden cinematography that frames every shot of Sofia Coppola’s adaptation of Jefffey Eugenides’ 1993 novel. Ultimately, the sound is a lot heavier than the material on albums like Moon Safari, the songs laden with orchestrated arrangements of juicy organs and fat synthesizers. However, this is offset by string and horn sections that lend this suite of songs a dreamy, almost cloudy quality that is both reinforced by and contrasted in the unfolding story of the ill-fated Lisbon sisters. At times the music can sound playful and romantic but then an instrumental like Cemetary Party or Dead Bodies will kick in to sway the balance towards an eerie and yet still epic conclusion.
Honorary mentions: Excellent songs about losing your virginity that are less specifically from a female perspective

1. Pulp – Do You Remember the First Time?
If not for the merits of the song in its entirely then especially for the laugh-out-loud overture of ‘Do you remember the first time?/ I can’t remember a worst time?’ Absolutely no gilding the lily there, then.
2. The Smiths – How Soon is Now?
It’s been speculated that this Smith song references gay club culture in Manchester, as experienced by the meek protagonist struck by ‘a shyness that is criminally vulgar’:
‘And you go on your own/ And you leave on your own/ And you go home, and you cry and you want to die.’
3. Prince – Head
Amongst as set of sexually-driven songs on 1980 album, Dirty Mind, Head possibly includes some of Prince’s most provocative lyrics. However, I’d probably argue that it was this kind of story-telling, coupled with the genre and gender boundary-crossing of not only his musical influences but his personal androgyny that really makes the whole thing so explosive, even by today’s standards.
And you said
“But I just a virgin And I’m on my way to be
Wed
But you’re such a hunk
So full of spunk,
I’ll give you Head
Til you’re burning up
Head
Til you get enough
Head
Til you’re love is red
Head
Love you til you’re dead
You know you’re good, girl
I think you like to go down
You wouldn’t have stopped
But I, I came on your wedding gown
And you said, “I must confess,
I want to get undressed and go to bed.”
With that I jammed, you fool,
You married me instead
Now morning, noon, and night
I give you
Head
Plus, any number of outspoken and brutally honest country songs, e.g. Deana Carter’s Strawberry Wine and I’m Not a Virgin Any More by Poe.

4 thoughts on “Top Ten Songs About Losing Your Virginity”