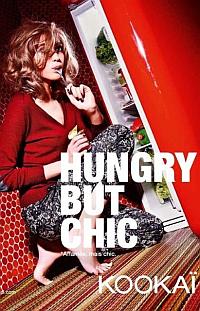 Picture the scene: you’re walking down the hallway in your Louis Vuitton silken nightie, a Prada piece slung casually over your shoulder for effect. You stumble slightly on the tiles as you enter the kitchen, because those Manolos really weren’t made for navigating easy-wipe floor decor. You reach the tiny kitchen fridge – miniature to encourage the purchase of solely miniature food – and reach in for a teeny tiny little calorie injection of fat-free yoghurt rich in bifidus digestivum. But when your little fingers clasp the plastic pot, you find that your much smarter and thinner roommate has already been there first, leaving only a Dior-studded teaspoon and a few droplets of creamy deliciousness in her wake. Struck with the raw, animal desire to consume pasteurised dairy products, you suck on the spoon with fervour, crouched on the kitchen floor without even closing the fridge, unable to contain yourself for even a moment longer. But satisfaction eludes you. No matter how much you want it, the full pot of strawberry flavoured yoghurt just isn’t there.

Congratulations – you are hungry, but chic. Now go and buy some Kookai. Who needs food anyway, when you’re CONSUMING FASHION? 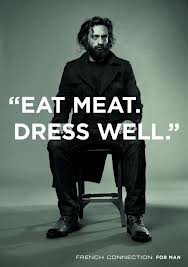 So, if you’re looking for the even more plain bizarre, may I offer you French Connection’s (formely FCUK, before everyone got bored of ‘fuck’) admonition to ‘Eat Meat. Dress Well’? Now, as one of those awful vegetarians, I have to say that this one made me raise an eyebrow or two. At least the man in the advert isn’t hungry – although I have to say, the waif-like woman who accompanies him in these commercials doesn’t ever get to tell her female followers to eat anything. Eating things, as well all know, is an aggressive and rugged activity usually reserved for the male of the species (especially if they eat meat, which is extra masculine and implies that they may be ready to shoot a deer with a makeshift bow quickly composed from some twigs he found in the park at any second.) A woman should be happy to feed off the sheer joy that her boyfriend gets from ripping the intestines right out of the nearest cow. 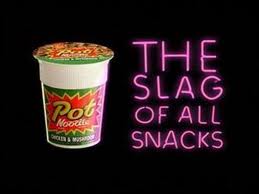 Finally, I present to you ‘the slag of all snacks’, Pot Noodle. Not much to say about this one, except it’s kind of hilarious and kind of terrifying. Adverts expand upon this theme by implying that Pot Noodle is a slag because you can pick it up anywhere and it’s cheap. BIG FEMINIST SIGH. On the positive side, despite its main demographic being student/especially blasé males (they once caused a stir by showing Welsh ‘miners’ digging for Pot Noodles at the pinnacle of their tastefulness), it’s actually not packed full of the flesh torn mannishly off the back of a passing pig. Yep, the little floaty bits masquerading as meat in Pot Noodle are actually PIECES OF TOFU – so stick that in your pipe and smoke it.

Coming up next week: is chicken tikka the WAG of the curry world? Plus, Marxist points of view on the Yeo Valley rap

5 thoughts on “Advertising That’s Eating You Up”