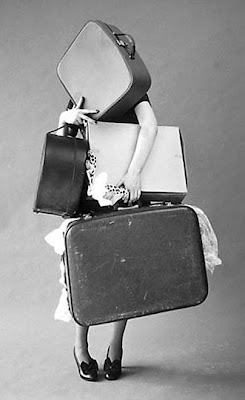 The winter is setting in, giving me cause for nostalgic ruminations on this year’s summer holidays, and, indeed, all the holidays that came before. During the course of my misty-eyed musings, I realised that holidays were different before I became a feminist.

Nope. Everywhere I went, Men shouted ‘sexy sexy, spicy spicy’ and other such maddening nonsense. Some grabbed me. Some followed me. Hardly any left me the fuck alone.

A few days into the trip I came down with food poisoning. On the first day, I actually shat myself (ending a twenty-one year record of not having shat myself). By day three, however, I had learned the sphincter control of a ninja. Attuned to the slightest reverberations of my colon, I could’ve shit through the eye of a needle at fifty paces. Then I got my period. I used up the two pads I’d brought with me, and ventured, anus painfully clenched, out onto the streets to look for more. But there weren’t any. Anywhere. And there were no women shop attendants to ask, and the men all seemed to hate me. In the end I used the same sanitary pad for 24 hours, by the end of which time, what with diahorrea and menses fermenting in the heat of North African summer, it was a bio-hazard on par with Sellafield.

In the days that followed, I waddled, straddling my loo roll stuffed knickers, out of the riad to complete my research. Men continued to follow my increasingly skeletal and olfactorily offensive person, shouting and clicking and whispering and groping, like wolves just waiting for an exhausted deer to fall. On the penultimate morning of my trip, I sat, head in hands, in my room, gently chanting ‘I can’t go out there. I can’t go out there.’

Morocco gets no hairy vaginas. Not only did I have the worst time ever, but Morocco destroyed my cherished cultural relativism. Until:

After Morocco, I was frightened of travelling on my own. And I had heard that Japan had separate subway carriages for men and women, that there were places called maid cafés that fetishised female domestic servitude, and that all Japanese men have mistresses and are obsessed with schoolgirls.But then I went there, and found a country full of the most helpful, kind and wonderful people imaginable. It’s like the whole country has taken a ‘How to be outlandishly nice to tourists’ course and gotten an A+.

And I spoke to Japanese women about the female only subway carriages. They explained that women could use any carriages they wanted, while men had to stay out of the female ones. I asked if this didn’t mean that women felt less welcome in the shared space. Most said no, that they often used the shared space, particularly at less crowded times of day. But, I argued, if groping is a problem on the Japanese subway, then surely the answer is to crack down on the gropers, not create separate spaces for women. They explained that this was exactly what had brought the female only subway carriages into being in the first place. The punishment for a man caught groping a woman on the subway would be so severe (he would most likely lose his job) that women felt guilty about reacting to harassment, and asked for their own space. Add to this the Japanese hatred of making a scene, based in an intense respect for others’ experiences in social space, and the pink subway carriages start to look, if not exactly rosy, then certainly understandable within feminist logic. Much like radical feminist women only spaces, I wish they didn’t have to be there, but I’m not going to tell women who want them that they can’t have them.

When I spoke to Japanese people, I felt ashamed of myself for believing the xenophobic bullshit I’d managed to pick up from somewhere. And I began to see all the feminist stuff that Japan does better than the UK – like having a gender neutral formal term of address, for example. No choosing between Mr, Mrs, Miss or Ms – everyone is just ‘San.’ Awesome.
And therefore Japan gets four hairy vaginas. Because not only is it a place of extraordinary cool, but it also restored my cultural relativism. Aaah. That’s better.

Chile
This year, using my crafty technique of tacking a holiday onto a conference, I arrived in Santiago de Chile for scholarly purposes eight days in advance of my current love interest.
And a very nice eight days I had too – navigating the city, holding conversations with people. Just like a real person.

Then the conference ended, my Stephen arrived, and *ping* I became invisible.

Being invisible was quite disconcerting at first. ‘Hola’ I would say to a random Chilean, ‘Dónde esta los plaza des armas por favor?’ But they could hear or see me. They’d turn to Steve and say ‘a dónde vas?’ And he’d say ‘Plaza des armas.’ And then they’d give him directions. I’d follow my beau, wispy and shadowlike, through the streets, pinching my pink arms. They felt substantial enough.

In hostels or taxis, at bus stations or restaurants, nobody could see me. They addressed all conversation to my corporeal companion. Sometimes, when our passports were checked, the checker would look at them and then give both documents back to Stephen. It must have been confusing, accepting a passport from thin air, so I suppose they reacted as anyone would.

Steve left a day before me, due to Air France being bastards. On my last few hours in Chile I found that I regained spatial and temporal reality. The hostel owner who had stared right through my torso the previous day sat down and ate breakfast with me. We chatted about lots of interesting things.

All in all, I’m giving Chile two and a half hairy vaginas, because the other two and half are invisible.

Feminist Planet Awards Ceremony and Disclaimer
Before I give the prestigious Golden Labia Award (GLA) for most feminist friendly destination, I would like to point out that my scores are whimsical, and bear no relation to the state of women’s rights in the countries visited. I’m aware, for example, that Japan has woefully low female parliamentary representation. Or that there may well be more to Canada than strip clubs. The GLA therefore, is not an award designed to allow its recipient to gloat, but rather an award to make feminists everywhere reflect on what they can do to make their country more worthy of hairy vaginas.

And without further ado, I present the glistening and beautiful golden labia trophy to the land of the rising sun.