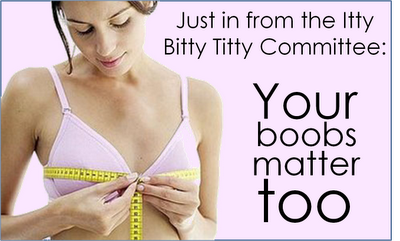 There’s been a lot of talk about what constitutes a ‘real’ woman of late, and we’re here to set the record straight. Caitlin Moran may have given you all sorts of ridiculous ideas in How To Be A Woman that flagged certain instances which might strongly suggest you are female: getting periods, for example, or falling pregnant; working your way up the career ladder with a few bumps on the way, or even owning a bonafide vagina (haha… boner.) But the point is that none of this stuff really points you towards what a REAL woman is. All you vagina-owning, child-bearing, skirt-suit-wearing hordes of higher-voiced hussies better just climb right down. Because apparently, a REAL woman is ‘curvy’.

Now, we all got royally pissed off when size zero fourteen year olds hit the catwalk (and the pages of Vogue) as the next best emaciated-looking thing to aim for since ‘heroin chic’. We came out in our droves to condemn the industry that, alongside ballet, had threatened to make anorexia trendy for more than a decade. These are serious issues that we continue to fight in the media, while being mindful of the fact that some women really are slim, antelope-legged, wide-eyed beauties who barely have an inch of fat to pinch and still maintain enviable levels of health. And you know what? Some of us made judgments that went the other way.

As a petite young buck on the lower side of five foot tall, I’m not suggesting for one second that I stand in league with the teeny-tiny-waisted plus-six-footers who hang Dior clothes off themselves with professional ease. But the condemnation of them has dribbled down and clung to my frame like a well-aimed cumshot. In proportion with the rest of me, my boobies and my hips are little. Not nonexistent, but I’m definitely not going to prop a beer can up in my cleavage any day soon. I can squash my twins into those little bandeau bikinis from Urban Outfitters, and they stand up on their own without any Wonderbra support – in other words, they’re pert but they’re no good for a motorboat.

Perhaps surprisingly, I don’t fucking care. I like my boobs the way they are, sitting there at the front of me, balancing my shape, standing to attention, and failing to give me back ache. And you know what? I know someone who is COMPLETELY flat-chested – and she couldn’t give a fuck either. She lives a fulfilled life, has many ardent admirers, holds down a job, eats food, watches movies and participates in sport. It’s almost as if having small boobs isn’t a recognised and debilitating disability.

Does a ‘real woman’ have fifties curves? Yeah, maybe. But she also goes straight up and down, or has a petite frame, or has huge hips and teeny basoomas, or the other way round (the lucky devil.) I am not a fraudulent female because my boobs are unreliable lifesavers in a Titanic situation. And guess what? Inserting silicone into my chesticles would make me logically a little bit MORE pretend than if I didn’t, not less so. I’m professing my natural dimensions, not a single horn or a pair of wings, so can y’all start BELIEVING IN ME now?

So long as we continue propagating the idea that a ‘real woman’ exists, we perpetuate the belief that some women just don’t make the cut. I don’t know about you, but that just doesn’t sit well with me. Let’s unite against these damaging attitudes about ‘fantasy women’ and fantastical woman, and accept that titties can be itty bitty as well as AOK, shall we?

Goddamn, am I glad to get that off my chest.