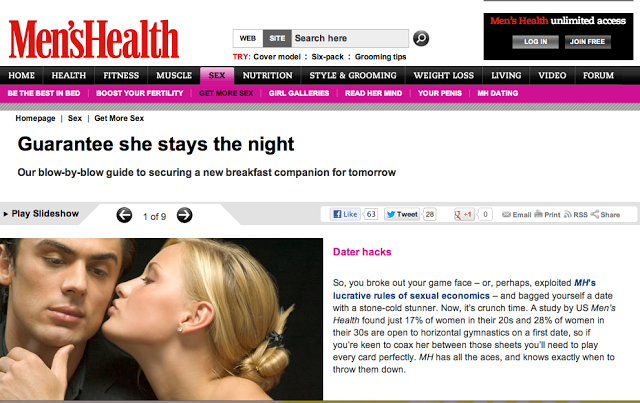 You know those guys that you see in bars, the ones who would drag your limp, unconscious body back to their man-cave after beating you round the head with their comically oversized club were it not against the law? Men’s Health Magazine does. In fact it breeds them.
Whilst ‘men’s interest’ magazines like FHM, Nuts and Zoo might be deemed offensive for their conspicuous and unrelenting pages, filled with more breasts than you’d ever find in a chicken factory, the ‘sophisticated’ man’s manual Men’s Health is giving its readers step-by-step guides in the art of tricking women into bed – and on the first date nonetheless. You have to hand it to them, these MH geezers are ambitious!
In its online feature ‘guarantee she stays the night,’ MH congratulates itself for giving its readers the priceless advice, protein shake recipes and dress code (which judging from its cover every month is ‘no shoes, no shirt’) that inevitably lead them to ‘bag a date with a stone-cold stunner,’ in the first place (surely ‘stone-cold’ would imply dead? – Ed.) . Now they’re going to go one step further and provide some lucky fellas with a ‘blow-by-blow guide for securing a new breakfast companion,’ although there are no prizes for guessing who’s going to be providing the blows and the breakfast (tip: YOU!)
Amongst the golden nuggets of macho wisdom are the instructions to suggest their readers want more than just a physical relationship with their prey – ahem, date; because of course the thought of a purely sexual relationship sends women running for the hills, shrieking like banshees, clutching their wedding plans and half-knitted baby grows. It then advises its readers start cooking, and then swiftly ask their unsuspecting breakfast partner to take over by ‘asking her to help with the meal.’ The logic here being, well, she’s a woman and this is the kitchen so it’s best to let nature take its course. MH smoothly reminds its readers that a bump of elbows whilst ‘chopping the veg,’ is ‘intimate,’ and ‘sexy,’ and not at all the catalyst for impending finger slicing.
The sum of MH’s indispensable advice comes with this gem, a secret closely guarded by the MH writers, and most likely being discovered by teenage boys all over the world right now; the secret to tricking a woman into bed is…wait for it…getting her drunk. The feature cites a study at the University of Denver as its source for this one, which found that ‘sexual expectations on a first date are increased when alcohol is available,’ – on whose side though, it doesn’t clarify. Whilst this is most likely due to some girl’s hazy memories of pounding one too many tequila shots and subsequently engaging in a pounding of a different kind with a regrettable choice of breakfast partner, it does not take a study to prove that booze is the single man’s best friend.This stunning piece of dating advice, rivalled only by Mel Gibson’s saccharine brand of sleaze delivered in What Women Want as he manipulates a woman into falling in love with him, is to say the least, based on wildly generalised perceptions of women, draws upon science which I can only assume was commissioned by a 15-year-old boy and worse, undermines women’s morals and integrity.
But it has endeared me to the term ‘breakfast companion.’ Every cloud.
- RC

4 thoughts on “How to Trick a Woman Into Bed”