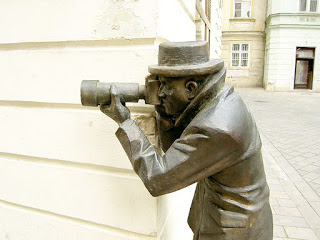 So a thing happened this week. You may have possibly heard about it. If not, I can only assume that you’ve recently awoken from a long coma, in which instance allow me to be the first to tell you that the recession was definitely over by Christmas, everyone got free tickets to the Olympics and Boris is the new Prime Minister.
T’was the Duchess of Cambridge’s breasts. So two things, I guess, technically.
In a move distinctly of the ‘ah, to hell with it, let’s do it anyway’ variety, the French version of Closer broke France’s own strict privacy laws in order to print topless snaps of the Duchess of Cambridge holidaying in a private villa with her husband. And they got away with it, too. Presumably due to the absence of any meddling kids.
With the pictures quickly spreading throughout the international press even after the injunction was taken out in France, a holiday photo has never caused so much chaos. Hourly news bulletins inform us in gleeful hysterics that yet another country/magazine/planet has published the photos (see this and this). Choice quote from the whole thing from start to finish, kindly provided by gossipmonger and general disturber of the peace, Carina Loefkvist, editor-in-chief of the Swedish mag See and Hear: ‘It is always relevant for us when a duchess and the future Queen of England is topless.’ Course it is, Carina, course it is. FYI, every time she changes her tights or pops in the shower – relevant for Sweden, everyone! In fact, it’s totally cool and hunky-dory for them to print the photos in the first place – even if it weren’t of great national interest to a country on the Scandinavian Peninsula – seeing as Kate ‘WILLINGLY REVEAL[ED] her breasts TOWARDS a public road’.
Yep. That’s right: towards. Towards a public road. From half a mile away. If that’s the definition of flashing these days, then frankly we’re all in a hell of a lot of trouble. Thanks again, See And Hear, for saving our dignity before we flagrantly brandished our naked showering bodies in the general direction of New York City, in an accidental act of punishable exhibitionism.
So, in contrast to the Swedes, Kate’s nips have served up a nice hot cup of outrage all around for the British press. Interestingly, this holds true even from the red tops, for whom a little decorative breasting doesn’t usually cause so much as an eyelid flicker, let alone a bat.  Indeed, Sun editor Dominic Mohan flatly refused to print the pictures – despite the newspaper’s well-known usual stance on breasts (that they absolutely belong to The Sun, and are absolutely fair game, and absolutely of interest to the general public. They’re relevant. Goddammit, they’re patriotic.) They did, however, merrily print not only a cheery mock-up of the naked photos of Prince Harry earlier this month – we can only assume as a sort of teaser preview before the grand unveiling  of the real-life birthday suit. But not a smidgeon of an areola in Kate’s case. Nope. Royal breasts are not allowed.
Which provides an intriguing little niggle in the whole affair.
Harry getting himself into a spot of bother with no clothes on after a few too many dizzy waters did not, dare we say it, provide much of a shock value in comparison with the privacy invasion of the ‘whiter than white’ Duchess. Fair enough – but with the new crusaders of all photos moral, The Sun, happily printing Harry’s photos and not Kate’s, and with no injunction taken out whatsoever on them, it seems as if Kate’s body is worth more to the Palace than Harry’s. And we’re not the only ones who have thought this: see here.AND despite the complete gender portrayal U-turn, as it shall henceforth be known, of the British press regarding pictures of boobs, the runaway success of the breasts, sorry, photos, internationally seems to suggest that the female body as a general rule is worth quite a bit more financially as well.
Interesting. And perhaps a little sad that despite the unnamed photographer recently spotted legging it as far away from Paris as he can, in a world where boobs equal megabucks, was apparently male, most of the key players in the Middleton saga seemed to be other women. French Closer editor Laurence Pieau is the reason we’re all having this conversation, women’s glossies broke the story, Valerie Suau has piped up with film of the Duchess sunbathing and of course, of course, our new friend Carina Loefkvist stuck her oar in. It seems that women in the media nowadays are all too often happy to jump on the pervy bandwagon.
So where do we stand on breasts anymore, as a society? Nobody is quite sure – apart from those half a mile away, of course, behind a tree.
Hmm.
- JL