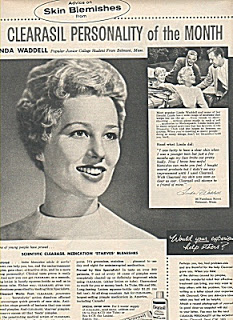 Let me tell you a very public secret that was once as plain as the nose on my face: I suffered from acne as a teenager. No, not the kind of ‘acne’ that’s bandied around nowadays as a euphemism for oily teenage skin and a couple of spots. Not the kind of ‘acne’ that a tube of Clearasil and a dab of tea tree oil gets rid of within five to ten days. Certainly not the sort of faint-hearted spot infestation that would break down and surrender to a blob of whitening toothpaste, or dive for cover after a dose of healthy exposure to the sun. My acne was made of sterner stuff – and it was real, full-blown, psychologically destructive acne vulgaris, abundant with blackheads and whiteheads galore.

There’s a special circle of social hell reserved for teenage girls with acne. It’s just about tolerated on boys, depending on the severity, and definitely more expected. One of my most painful memories is being told by a particular little shit in my Biology class to my face that ‘I thought only boys got spots.’ Of course, many a biting retort comes to my mind now (‘I thought only girls had vaginas’ is just one of the catastrophically un-feminist and immature ones that comes to mind) but at the time all I did was turn away and blush. I was well aware that I was the worst kind of unusual.

The year that I turned twelve years old marked the beginning of a decade of doctor’s appointments and a mountain of mostly useless medication. Any acne sufferer worth their salt will be intimately acquainted with the difference between salicylic acid and benzoyl peroxide, as well as the turning point at which your doctor changes tack from topical ointments to long-term antibiotics. For four years straight, I took a variety of antibiotic pills that did very little for the spots on my face but lent me a fair few residual health problems. When this didn’t help, I went on the Pill. And when even the Pill failed to grant me the flawless skin I was sure I deserved, I moved on to the notorious sebum-eliminating drug Roaccutane.

Roaccutane, a slightly terrifying export from the States (where it’s marketed under the name Accutane), is a Serious Drug. It comes in metallic bullet-like packaging and a huge red box warning about serious birth defects. Women who take a course have to sign a contract attesting to the fact that they are either celibate or using two separate forms of birth control, so serious are the potential consequences on a foetus. Its mechanism is fairly simple: it directly attacks the sebaceous gland cells in your body (amongst others), thus rendering the formation of further acne pretty much impossible. It doesn’t necessarily target the cause of the problem, but it works to weed the bastards out. It is the vigilante Batman of acne medication.

Roaccutane cured my acne, and the acne of everyone else I know who took it (the numbers are fairly small, and the population who admits it even smaller.) But it also made my curly hair fall out in clumps as it got so dry that I could barely pull a brush through it without it snapping. It gave me random nosebleeds and bleeds from my ears, and aches in my joints that sometimes became excruciatingly painful. Every month, I stood in line for a blood test at the local hospital to make sure that it wasn’t destroying my internal organs. It gave me permanent eczema on my hands, and random attacks of depression – and when I wasn’t happy enough with the results, I went back for a second course. I was put on this drug in 2006 – in 2009, it was pulled from the American market; in 2012, I found out that its secondary usage was as a chemotherapy treatment for brain cancer. I wish I could say that, had I known how serious the drug is and how many studies have now shown a high possibility of dangerous side effects on brain activity and bone density during usage, I wouldn’t have taken it. But the truth is that in all likelihood, I would have.

Now in my twenties (and I still don’t have perfect skin, by any means, although it now definitely falls into the category of ‘normal’), I have reflected on the lengths to which I was prepared to abuse my body for my looks. I certainly don’t feel that I would have a leg to stand on if I wanted to condemn plastic surgery. Like many other women who have gone to extreme medical lengths, I was driven to the specialist by what felt like an unbearable weight of social judgment that bore down upon my barely resisting teenage frame. I was being fucked by the great big fat man of adolescent expectations, and fucked hard.

A couple of years ago, one extremely brave young girl posted a make-up tutorial on YouTube that hit the headlines because she removed her own perfect foundation and revealed severe acne underneath. The video, which now has just under 11.5 million views and counting, showed a beautiful girl saying, ‘This is the most nerve-wracking thing that I could ever do’ before presenting herself to the world without a scrap of her usual make-up on at all. ‘I’m just going to try and put my make-up back on as soon as possible,’ she is seen saying apologetically, ‘so that you guys don’t have to, um, look at this.’ Her words hit me hard, because the shame that began with one boy in Biology class had dogged me everywhere I went for so many years. Since before the noughties, I had felt searing jealousy for people who only struggled with their weight: a problem with a seemingly clear solution, and one that many would regard as no problem at all, but merely another form of beauty. Acne was never considered another form of beauty. People had, at one point, literally recoiled from me.

The outpouring of positivity at the DiamondAndHeels14 acne video was touching enough to get me teary all over again. In contrast to the bouncing, grinning, radiant-skinned models of the Freederm adverts, this young girl had an immediately obvious condition. She was honest about her insecurities and honest about how she dealt with them. Sure, she wasn’t dealing by eschewing foundation and declaring it the world’s problem if they judged her. But this is acne, a desperately lonely condition with a particular kind of female shame attached. There is no equivalent of the ‘curvy and proud’ brigade in the weight stakes for girls with pimples. It was shocking enough for international news that a young girl openly and publicly admitted the problem underneath her concealer.

The fact of the matter is that acne is a confusing condition with very individual causes, ranging from allergies to hormonal conditions to the natural bacteria that lives on your skin.  Its sufferers, and the doctors who treat them, are usually mystified by its appearance. It makes me desperately sad to know that my teenage self resorted to chemotherapy medication when the issue arose, whose effects I still personally live with on a daily basis. It’s even sadder to know that acne in young people has a very noticeable positive correlation with an increased risk of suicide. Meanwhile, the prevalence of disguising cosmetics for women – and the pressures to use them – mean that while some girls find the confidence to finally leave the house, the one girl who does go bare-faced shoulders a much heavier burden than she ordinarily would.

But I don’t feel qualified to conclude on any kind of a didactic note, because I know that I’d be first up to the foundation counter on any given Saturday. Even I’m not sure how I feel about that, and I have a good ten years of squeezing whiteheads under my belt. Instead, I can tell you that the most valuable lesson I’ve learned so far is how much we need to start up a big, shameless, disgusting, society-wide conversation on zits if we want to get anything done. We owe it to ourselves and our future daughters, some of whom will be inevitably spotty, to acknowledge the normality of shitty skin. Because the most vulgar thing about acne right now is how none of us even talk about it.

7 thoughts on “Spot The Problem”