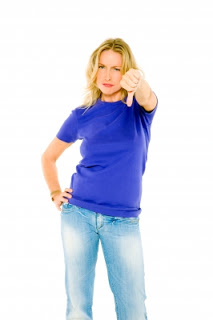 The Daily Fail has been in direct competition with Rush Limbaugh this week (who, in case you hadn’t heard, claimed that feminism shrunk his penis) and so we thought we’d treat you to a good old round-up this Saturday. After all, everybody loves to spend the weekend testing out the boundaries of their gag reflex – and yes, yes, I know it’s Fresher’s Week, but if you’re not eighteen and experimenting in Pacha, then here’s the next best thing: four truly vomitworthy stinking chodes to get your lips around. 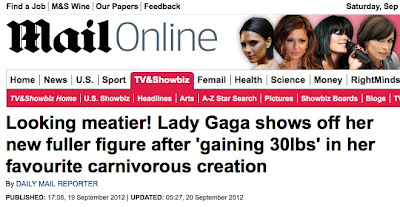 In an article that memorably featured the line ‘Despite her weight gain, Lady Gaga was polite to her fans’ – a tweeted favourite of Hadley Freeman, no less – the Fail ran five articles in the last two days on how much weight they presume Lady Gaga has put on during her latest tour. ‘I love pizza and pasta!’ ran one particularly mind-numbing headline. Once we all got over the shock of Mama Monster’s freakish tastebuds (pizza and pasta, you say? Get her off to the asylum with all the other female hysterics!), a ‘Daily Mail Reporter’ who chose to remain nameless got on with some classic ‘fat-shaming’ tactics, replete with unflattering imagery taken from Gaga’s various shows in the last few months.

Other choice headlines surrounding this non-issue included ‘Looking meatier!’, in a clever reference to her meat-lined dress as well as her supposed weight gain; ‘Suddenly shy! Lady Gaga covers up her fuller figure’ (bizarre, considering the totally non-destructive attention the media has given to it), ‘Lady Gaga flaunts head tattoo – but hides fuller frame’ (the coy, irrational cocktease), and, of course, ‘Kelly Osbourne claims Lady Gaga is pregnant.’ Magnified and possibly Photoshopped pictures of the singer’s fishnet-clad behind are plastered across each of these articles – but they won’t stoop to reproducing Kate’s boobies, everyone. That’s modern morality for ya. 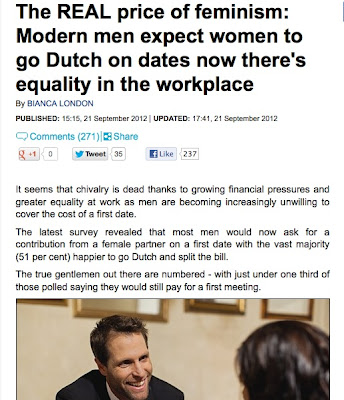 Shit, girls! The REAL price of equality: equality. If someone had told me that by being a feminist, I’d have to actually spend money, then I would have given up that pedantic little pastime a long, long time ago. The predictable outcry from the Fail was that ‘chivalry is dead’, which means that you can’t even expect your boyfriend to turn up in a full suit of armour on a first date anymore, never mind pull out your chair and stop himself from calling you a brazen hussy for venturing out alone past 6pm. However, it’s not all bad news: as per the article above, feel safe in the knowledge that he’ll be happy to ‘fat-shame’ you (hopefully publicly) if you put on a couple of pounds, so you’ll always stay in shape! 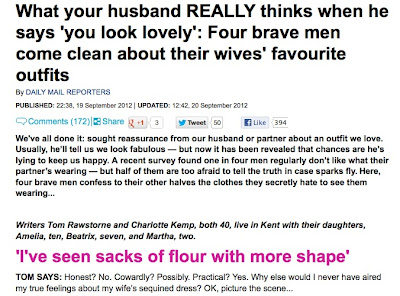 Just in case you’re not confused enough about your relationships and station in life following the plethora of horseshit that the Fail has rained down upon you all week as it simultaneously humps your mouth with the patriarchy, here’s one for you from the Femail section. Essentially, ‘stuff your husband didn’t like about you that you didn’t even know: the clothes edition’, which follows on nicely from the other things your husband doesn’t like if you follow this section regularly, you poor, poor masochist (a quick summary: you earning money, you dyeing your hair, you not dyeing your hair, you not staying at home with the children, you cooking, you not cooking, you putting on weight, you losing too much weight, you wanting children, you not getting pregnant fast enough.) 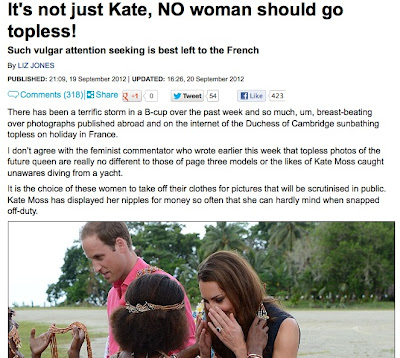 No woman should be allowed to set her funbags free in the great outdoors, reckons professional troll Liz Jones, who stuck her oar in this week to comment on the Kate ‘scandal’ (s’alright, Liz, we did it too.) Just to make sure that we didn’t mistake the Fail for a bunch of stuffy, prejudiced, right wing white males, Liz is always here to remind us that they’ve allowed a stuffy, prejudiced, right wing white female to get in on the act too. Reading the article feels a little bit like self-flagellation and a little bit like battling a jelly sword with a bowl of tuna: totally, surrealistically illogical. Liz’s central argument is that ‘Kate brought it [a media shitstorm] upon herself’, but then concludes from this that no one should sunbathe topless because it causes skin cancer. Typical DF logic jump there, Liz, and no one in your office around to point it out! It’s all right, coz down here in the Vagenda basement, we’re here to lend a helping critical hand. And so long as you’re there to police what all women can or cannot do, it seems we’re all doing our jobs as intended.
Are you swinging from the rafters yet? Well, there’s always next week.

2 thoughts on “The Deconstructed Daily Fail”