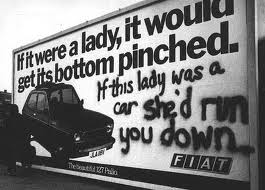 ‘Gender advertising’ isn’t a new or even particularly successful concept, but it just keeps rearing its head like a fucked-up phoenix through the flames anyway. Everyone knows that pink is for girls and blue is for boys, but sometimes, it’s worth taking a step back and pitting the traditionally female products against their traditionally male counterparts. You know, just for shits and giggles and a bit of light fun and a Saturday night spent banging your head repeatedly against the wall while crying about the dregs of humanity, whatever.
So whether self-flagellation or a bit of a giggle is your style, we’ve compiled the best ‘man vs woman’ products for your information and celebration. Take from it what you will.
Bic For Her vs Bic 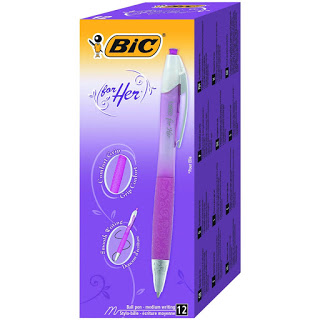 A delicate, pink affair for dainty little fingers and i’s dotted with hearts, the Bic For Her pen has finally brought writing to the 50% of the population who were previously forced into illiteracy by spiky rock-hard Man Pens. Perfect for practicing your calligraphy alongside a favourite dish in your recipe book, Bic For Her comes with a caveat that it should NEVER be lent to your boyfriend, lest he crush it in his iron grip after barreling in from a day down the mines. Use for writing fairy stories and appropriate mathematical calculations (how much milk you need in the baby’s bottle for a day out in the country, how many shoes to take on a holiday to the Seychelles.)
Warning: NEVER use to fill out tax returns, mark routes on maps, or other traditionally male pursuits. In this instance, it is highly likely that the Bic For Her will burst into pretty green flames and disappear in a puff of glittery perfumed smoke.

A long, stern, phallic pen confronts you as you pick up the default (masculine) Bic. Colours available are Black of Night and Warning Orange, which non-coincidentally are the colours of tiger stripes. Tremble as you carve out your runes with this formidable device. Remember, man holds all of literature in his calloused hands.
The Fujitsu Floral Kiss vs a standard Fujitsu laptop 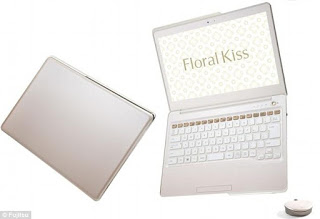 The ‘ladies-only laptop that you can open without chipping your manicure’ (this isn’t even a joke) knows its target audience. With a sparkly crystal ‘on’ button so little ladies can work out what to press to make Computer Do Stuff, the only thing this baby is missing is an emory board in place of a space bar (just you wait for the updated version, girls!) Luckily, it’s not just the outside that’s been carefully crafted to appeal to the female aesthetic: the female mind has been worked out and converted into cyber form, with applications such as the daily horoscope intended to keep the fairer sex happy. If she ever attempts to click on BBC News, the ‘year for Sagittarius’ will surely catch her eye and reel her back in to more feminine pursuits, meaning that your darling wife can feel like she’s joined the world of technology while not straying too far out of her station. The perfect placatory gift for a wife with a woman’s brain but a little too much ambition. 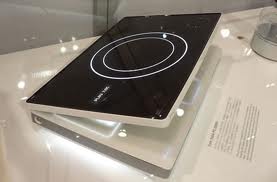 This terrifying Man Machine has the capability to carry shoot-‘em-up games and a hardened case to scrape along cave walls while you’re carrying a beast on your back. It also has, y’know, all the information about the hard drive, memory and software displayed openly, and its buttons aren’t made of crystals. Unlike the Floral Kiss, it doesn’t have a silly name or a mouse included to fit teensy little hands, but you are encouraged to come up with your own laptop moniker. Some suggestions: The Data Eater, The Bloginator, The JPEG Oppressor.
A Crispello bar vs a Yorkie bar 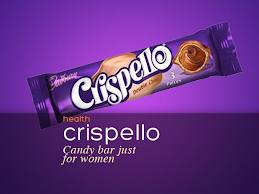 A chocolate bar cut into three tiny puffs of wafer that you can save throughout the day, the Crispello takes care of that most female of your needs: dieting. As we’ve already mentioned its various qualities on the blog before, we won’t waste too much time reviewing it again – but suffice to say, if you’re a weight-obsessed hog who can’t control her own food intake very well, this chocolate bar is here to save the day with its clever little reseal and its total lack of flavour. And if you don’t think you are, you’re probably just deluded. 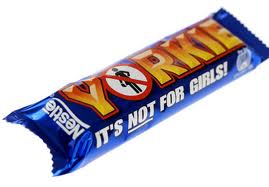 IT’S NOT FOR GIRLS. Why? It’s chunky, it’s chocolatey, it’s large and edible, and it’s named after a part of the North. Everyone knows that women aren’t allowed to exist past the home counties (they’d just get their satin gloves dirty mixing with the working classes anyway.) If you find yourself biting into one of these during a particularly tough period craving when the corner shops just doesn’t sell ANY Crispellos, make sure you keep the tears running down your face in a little vial to remind you of your indiscretion. You didn’t even save a single one of those pieces for later, did you? You butch, slovenly pig.
Male Halloween outfits in shops vs female Halloween outfits in shops 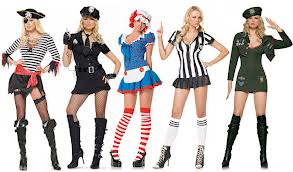 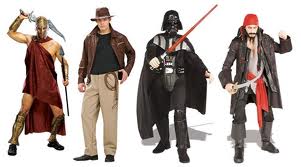 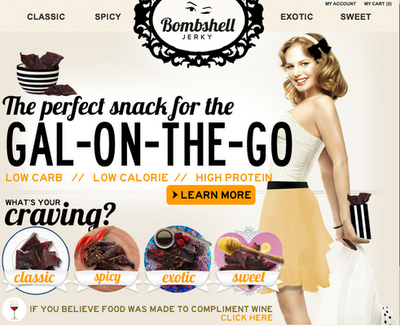 Just when you thought some things were sacred, gender-based advertising has apparently even intruded upon the hallowed halls of beef jerky. Nowadays, you can make it super yummy and super sweet while you go out shopping with a super cute bag, honey. We know how a woman likes her cow: processed, pulled from the most vulgar parts of something’s insides, suspiciously salty, and sometimes mixed in with maple syrup, like a semen facial payback after you spend a day at Harvey Nicks flashing your spouse’s credit card. What, that’s not what that ad was trying to imply? Whatever. 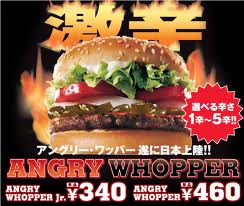 Meanwhile, down at Burger King, the ANGRY WHOPPER is filling your man with dead animals and TESTOSTERONE. Beware the power of this processed food in seeded bun, as its rage-sodden existence implies that the man eating it probably ripped it straight out of a passing animal on his way down to Burger King. It has ways of making men shoot passers-by and cum at the same time as soon as they inhale its fumes from across the counter. Be careful with this one, babe – it ain’t no woman shit.
Got some more good versus products? We’d love to hear it!

7 thoughts on “Woman vs. World”