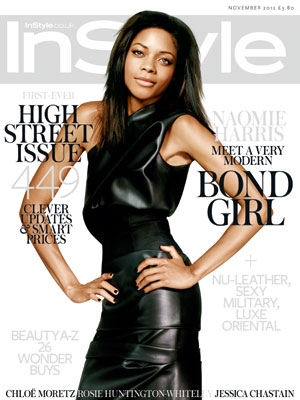 If we are supposed to consider Vogue the Bible of style, then I can only conclude that we must think of InStyle magazine as the Dead Sea Scrolls, i.e. a struggle to read.  Similarly if you don’t speak ‘fashion; then you’re probably going to find the sort of breathless, nonsensical babble that you find in InStyle a bit tricky. InStyle is littered with seemingly made up expressions like ‘keep seperates tonal’ and ‘high-low cocktail’. If I ever over-heard people actually talking like that, I would assume they were speaking Oompa Loompa.
Anyway, we ladies are always keen to place belief in the importance of stuff like codflower oil and pro-keratin, blow £2,000 on a new winter coat and enjoy sprinkling bee pollen on our salad. There is nothing more important in life than having an ‘apres ski’ complexion and being able to work an Aztec print wet look cat suit. Or if there is, then InStyle don’t want to hear about it.
However, being as there’s a recession on or something, the editorial team are reaching out to the readership who perhaps need their style advice tailored to a slightly smaller budget. This month is their FIRST EVER high street issue (squeal!), so even those of us that work on the check out in Asda can strut about in nu-leather, sexy military and luxe oriental. It’s also a handy way of reinforcing the message that shopping is such an integral part of being a woman that it actually counts as a formative experience. A feature entitled ‘My Life OnThe High Street’ allows celebrities to reminisce dreamily about their first pair of Guess jeans. It’s poignant stuff, this style business.
Now of course, as a modern woman, you are permitted a certain amount free reign when it comes to style. What else did the Suffragettes chuck themselves in front of buses for? But even so, you can’t just be left to get on with it. Without being instructed to overhaul your entire wardrobe every 3 months or so, you would quickly sink into a fashion nadir, wearing clothes because you liked them, or even worse, because you didn’t really care about them.
Thank God then, for the style diary, which insists you get a lunch time blow dry on Tuesday and treat yourself to a leather tote bag at a mere £395 on Thursday. If you stick religiously to the style diary, you will be forced to live in one of the bins behind Asda as you can no longer afford anywhere else. Still, it’ll be handy for work. Guides to the aforementioned ‘sexy military’ and ‘nu leather’, which recommend you wear tuxedo trousers and dominatrix boots. When you are walking down the street in this sort of clobber, people will automatically assume you are playful, but with a serious edge. They absolutely will not assume that you’re a member of some weird historical re-enactment society. A big ramble about a new trend amongst women of buying perfume without sniffing it first. Scandalous. And spotting mini trends like ponytails and plucked eyebrows is also very important, apparently if 4 celebrities are doing it then it it’s OK for the rest of us to do it too. The high street has been entirely forgotten by this point, and we’re back to being pushed acrylic mix kilts for £135.
In order to ensure you don’t mistake the magazine for a deluxe version of the Argos catalogue, there are also some interviews with the kind of stylish young women you should want to be, but obviously never will because you are too short and you have weird eyebrows. Women like Rosie Huntington Whiteley, who thinks the best style advice she ever heard is ‘dress for yourself’ and in the very same breath announces she cannot stand ‘slogan tops or when adults wear Hello Kitty designs.’ You know, people who are dressing for themselves. And Chloe Moretz, for whom I begin to have concerns when I read that she doesn’t want to wear anything that makes her look older than she is, yet the InStyle journalist notes admiringly that she is sporting Chanel, Dolce and Charlotte Olympia. Chloe Moretz is 15. Girls her age are usually kicking back on the couch in their well-worn onesies of an evening.
There is also a full on gush fest with brand new Bond girl, Naomie Harris, who is sporting a ‘chic leather apron’, a piece of clothing that I suspect is the result of everybody at Topshop being fresh out of any better ideas and thinking ‘fuck it, let’s see if they’ll swallow this one’. Naomie is incredibly excited about being a Bond girl, yet quick to assure us readers that the world has moved on from when women were cast in films for the sole purpose of ‘offering the drinks.’ Nowadays, they ride motorbikes, and throw punches and wear eyeliner and stuff. She obviously doesn’t subscribe to the opinion that the term ‘Bond girl’ is synonymous with tired male fantasy. However, there is quite a body of evidence to suggest that although they may be holding a machine gun instead of a cocktail tray nowadays, but ultimately, they end up shot, eaten by sharks or dumped without a backward glance. Much like the editorial team of InStyle magazine. Hopefully.
- EC
N.B. As the editor I feel honour bound to point out that we don’t want anyone to actually be eaten by a shark, just maybe messed up a bit, so that their blow dry is ruined. *LEGAL DISCLAIMER KLAXON*

4 thoughts on “You Are What You Wear, Okay?”