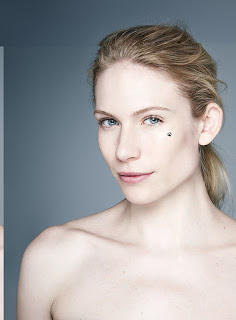 Pudsey the Bear is at it again, and this time he’s getting all up in women’s faces.
Need some context? Every year, the BBC’s annual Children In Need inspires people across the country to carry out increasingly dramatic feats in the name of a worthy cause. Today is no exception – some will coordinate bake sales, some will skydive, some professional models will go without make-up, some ‘hilarious’ jocks that I know personally will run a marathon in drag. No wait, go back one. People SPONSOR us to go without slap nowadays?
Bizarrely enough, it’s true. This year, in the name of charity, countless models and TV celebrities – most notably Heidi Klum – will bravely go out into the social jungle without make-up for a single day. The famous ones are going without their clothes, too, having conceded to being photographed in the buff wearing nothing but their ugly naked faces and a cute little bear stamp to represent the ‘Bear Faced’ campaign. (See what they did there?) What’s more, they’re encouraging women nationwide to do the same (minus the naked part, I think), seeking sponsorship money for the charitable efforts of leaving the Max Factor out of their mornings.
Now don’t for one minute get me wrong – I wholeheartedly salute their attempt to make a difference to the lives of underprivileged kids. I have zero issues with that aim – how could I? I do, however, have a couple of teeny tiny gripes with the way they’ve gone about it, catapulting women’s faces into the frame once again as something for money to change hands over.
Despite the fact that millions of us girls – horror of horrors – go without make-up every day and just get on with it, thus making this, in many ways, a sponsored ‘normal day’, the campaign is spreading like wildfire. Last week Stylist magazine opted in, printing a picture of a ‘bear faced’ model on their cover, and running the natural beauty theme throughout their editorial. Having grabbed a copy on the daily commute that morning and woken up – sigh of sighs – to yet another day in which whether a woman is wearing war paint or not remains a cause for debate rather than simply a casual observation, I feel there are a few things to be cleared up here.
Firstly, one thing that separates the rest of us from Klum and co is that we’re not all sickeningly gorgeous people, routinely paid to look good, with a well-lit studio and our own personal Rankin to hand. One look at the photos and it’s pretty darn obvious even to someone who can barely hold a camera straight that these photos are professional (not that they wouldn’t be insufferably beautiful if they were taken on your dodgy old Nokia’s camera-phone, but whatever, a girl can moan.) Dunno about you, but seeing a naked, slap-free Heidi Klum luxuriating in front of the lens of a well-known photographer doesn’t exactly make me feel like forking out for her sacrifice. Instead, it kind of makes me feel like developing the alcoholic habit of a lifetime which will, in turn, make ME into a case for charity. Sponsoring her and her cohorts to look incredibly attractive but un-done-up in front of a camera surely means that someone should sponsor me and my best mate to get rat-arsed tonight at my local boozer on Snakebites rather than straight-up Bulmers. The sacrifice I’ll be making doesn’t exactly bring tears of gratitude to a passing viewer’s eyes, but hey – after the first four pints, a Snakebite can be a delicate test of endurance.
Most importantly, however, and slightly more seriously, encouraging women who quite happily and comfortably wear make-up every day to go without in order to look more like the ‘natural beauty’ of this week’s mags is no more honourable than the suggestion that make-up must be worn at all times in the first place. We have every right to wear as much or a little as we like, be it anywhere between applying our foundation with a trowel or simply running the occasional brush through our hair. It cannot be a good thing for the world that women famed for their beauty are now trying to make us feel that our own private norm, our little make-up routine, is anything other than just right. The suggestion that we should have beautiful, make-up-free skin is simply setting us up for yet another fall, and is no more right because it simply lies at the opposite end of the spectrum to the suggestion that we must wear heels or nail varnish in order to be feminine.
Increasingly, it seems like it’s women’s faces and bodies that are open for commentary and the latest charity PR stunt, rather than their achievements of endurance or an exercise of their wider talents. Is this really where we got after so many years of putting on bear suits and doing an anthropomorphic dance outside of Tesco? Little girls are tuning in to see Pudsey the Bear and being beaten with the big, scary stick of new social norms here: it doesn’t take a genius to work out that a campaign saying a make-up-free face is a sponsorable feat implies that to go without the ‘Yuletide Glitter’ lippy is out of the ordinary, difficult, and unusual. This is why people sponsor sky-divers, but no-one’s ever incurred a fractured collar-bone by failing to put their mascara on before (I think.)
So thanks, I know you tried, but just stick a few quid in the bucket next time, will you? My face ain’t open for business at the moment, and the idea that people should give me sympathy money for showing an unpowdered nose to the world is just a load of bear-faced cheek.
-JL and HB