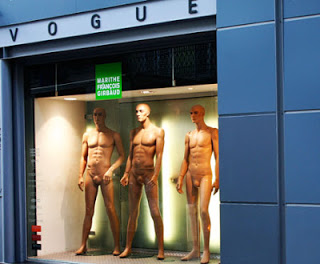 So I don’t know if you guys have ever had this experience before, but I’ve seen a penis. Seriously. In fact, if I’m honest, I’ve seen a few. Big ones, small ones, hard ones, soft ones – a veritable nursery rhyme of fleshy organs. I’ve seen them in real life, I’ve seen them in porn, and I’ve seen a couple of particularly gross ones in the type of ‘sex ed’ that attempts to educate you out of sex entirely with depictions of the worst possible consequences.
But you know what? I haven’t seen enough. And that’s because, as BBC News rightly pointed out today, the male naked form always seems to get our knickers in a twist in a way that the female form just doesn’t. We’re all pretty chilled about naked laydeez in galleries (caveat before everyone rushes down to the Tate: I meant the art, not the patrons) and films. We’re used to seeing hella feminine nudes, and naked women often appear in modern photography (the artistic kind, not the ‘night on XTube’ kind, though they’re obviously fairly prolific on there.) And while David Beckham’s boxer-clad bod did appear on billboards across the country, we rarely see a half-naked man advertising somebody’s wares in an overtly sexual position like the wide-eyed, gyrating, lip-licking chicas lining the shopfront of Ann Summers. In a country where your local corner shop stocks its baked beans next to the naughty magazines with boobies for titles, we don’t often bat an eyelid when someone wheels out a photo of a sister sans clothes, bearded clam and all.
Nudity and its level of acceptability is a debate that’s probably been raging in your head – or simmering, back burner style – ever since you heard that urban myth about some minority group demanding their newlyweds have sex through a hole in a sheet. The BBC’s got something to say about the issue today because of an exhibition in Vienna. Quick summary: it’s all about naked people. From ancient statues to modern store mannequins, it’s a whole load of cock and fanny. Naturally, the exhibitors wanted to advertise their work with posters including the work shown – so, basically depictions of naked people. And a lot of Austrian people got really (dick) cheesed off.
People weren’t so much up in arms about the women, the BBC’s correspondent in Vienna reported, but the menz were a problem. It got to the point where posters of naked males had to carry stickers over the naughty parts, which in my opinion kind of makes them into an interactive experience rather than a respectful nod towards modesty.
Why is there such a reaction to boys’ bits? The quoted art historian on the BBC gives us a whistle-stop tour on female nudes: the classical model of a vulnerable female nude acknowledging the gaze of the beholder; the male nude intended to show strength and invulnerability. ‘Female nudity is not only omnipresent [today], it is also unthreatening. Male nudity is more challenging,’ they go on. Never missing a trick, expert Eva Kernbauer adds that ‘the sexual organ in itself does not necessarily have to appear as threatening or aggressive’. There’s a woman who’s definitely seen a dude attempt to pee after sex, which is certainly more on the ‘hilarious’ side of terrifying.
While the classical model of what counts as Scary Naked Person and what doesn’t is well established, I just don’t buy that that translates into our psychological response to male nudes today. The footballers’ willies being covered up in Vienna just aren’t in the same league as sculpted portrayals of Roman soldiers brandishing their chipolatas (sorry, er, hulking weiners) and if you’re going to do a BBC article on the prevalence of the male nude, it might be worth mentioning something besides the historical idea of the powerful penis. Our cultural attitudes today owe a lot to the media around us now, which is worth investigating. So why not delve a little deeper, rather than ending on the note that most of the naked guys are ‘not like ugly old men with a big belly, so… it’s nice to see.’ (That’s seriously the final paragraph.)
Some of the strictest conditions on TV and film relate to erect penises (especially if they’re engaged in ‘live acts’, lol) while oiled-up nineteen year olds licking whipped cream off their fingers is just another MTV music video and/or the latest coffee ad. And it’s really not because we’re being protected from the aggressive terror of a man’s one-eyed wonder. The last time I got in to bed with a man, I didn’t catch a glimpse of his trouser snake and immediately faint from the violent way that it refused to acknowledge my gaze.
So, if I could, I’d like to submit an additional quote to the BBC article on the male nude, and it goes like this: beavers are everywhere, and willies are silly. Genitalia is funny, and it’s guaranteed to offend if you get it out in public (poster depictions or otherwise.) But every man and his dog has seen a hairless labia close-up these days, and whatever you take from that, it means that we’re all a little bit more uptight about penises.
So what’s the solution: more bollocks or less? A more open policy with both vaginas and penises, or fewer of the aforementioned labia close-ups to balance the books? The jury’s still out, but stay tuned for the next fifty years and we’ll get back to you. Probably sarcastically.

One thought on “Bollocks on the BBC”