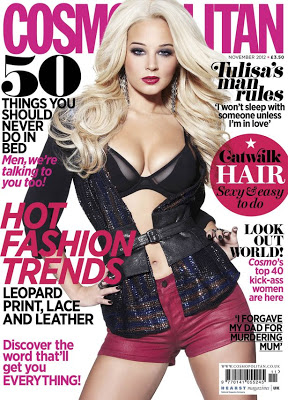 As you know, ladies, being a woman is all about priorities. Forget world hunger, there’s are a million things closer to home that you need to be worrying about. But much like picking out an outfit, it can sometimes be difficult to know which anxiety to accessorise with at any given time. Thankfully Cosmo is here to help by telling you what you should be worrying about this month, and we’re here to sooth your anxieties though what we like to call CBT (Cosmopolitan Behavioural Therapy). Step into our office, baby and lie down on our therapists’ couch*.

Anxiety: Does my enjoyment of Fifty Shades of Grey indicate that I, and by extension all women, want to be dominated?
Reality: No, not necessarily. A fantasy is a fantasy is a fantasy, and just because you enjoy a little spanky spanky, it doesn’t mean that you want to become his virginal sex slave who can’t so much as eat a pancake without his written permission. Incidentally, why are you still reading that fucking book?
Anxiety: Will all my Facebook friends hate me if I’m ‘tagged in the same look twice’?
Reality: I hate to break it to you, but the only person who is probably looking at your Facebook photos is your ex, and his sticky hand certainly isn”t navigating towards the albums in which you’re wearing clothes, oh no. He’s making a beeline for ‘Corfu summer ’06′ and there isn’t anything you can do to stop him laughing all the way to the wankbank.
Anxiety: If I wear a pink sequinned dress to an awards ceremony, will Nick, 24, from Cardiff, think I look like ‘a budget Barbie Doll’?
Reality: Almost certainly, but then Nick, 24 from Cardiff is in no position to be talking, resembling as he does a hard boiled egg. Who knows? You may call him out on his bitchy behaviour (who does he think he is? Noted fashion photographer Nigel Barker?) and before you know it he’ll be murmuring softly ‘I love it when you get angry like that. Come here’, before enclosing you in his muscular arms. ‘The Barbie and the Boiled Egg’- a truly modern fairytale.
Anxiety: Is my phone ruining my love life?
Reality: Unless your phone is fucking your boyfriend behind your back, then probably not. Cosmo has concocted a universe in which we’re all either frantically sexting or cyber stalking one another, which, unless you’re from Yorkshire and Humberside, the population of which seem to have abandoned real ale and flat caps in favour of ‘Skype sex’, is clearly not the case. You could always try spicing up your ‘sext life’ with a bit of ‘e-fidelity’, but unfortunately scientists have proved that the use of one or both of these terms is linked to erectile dysfunction and loss of sexual appetite.

Anxiety: Am I doing one of the FIFTY THINGS that annoy him in bed?

Anxiety: Can I make myself fall in love with him?

Reality: Probably not. Despite the fluffy bullshit that Cosmo peddles about putting him on ‘Man Trial’, there is actually only one sure way to tell whether or not you’re that into a man, and it has proven to be a failsafe amongst my friends (bisexual and lesbian ladies: I haven’t much data on this from your POV so do feel free to send feedback). The way to tell is this: get him to go down on you. That’s it. Because if you’re not into a man, the minute his tongue touches your special flower, you will flinch, then the still small voice in the depths of your psyche will push itself to the forefront and you will involuntarily yell ‘STOP’ at the top of your voice. That’s how you know.

Anxiety: Am I a Charlie or a Leila?

Reality: Unfortunately we’re not talking about the children’s TV series, but about two friends of Cosmo journalist Catherine Grey. One, Leila, is great at one night stands. The other, Charlie, dissolves in a pile of post-coital tears and finds the whole experience harrowing and soul destroying. According to Grey, women are simple organisms who can be divided into two camps. In reality, you are probably neither. There are some shags where the next day you you’re ringing your mates the minute you get out of his house at 8am and hollering triumphantly ‘I’M ON THE DISTRICT LINE. I’M WEARING AN EVENING DRESS! HIS NOB WAS HUGE!!!’ Then there are others where your mouth feels like something (probably his penis) crawled into it and died and your head has that fuggy goldfish bowl feeling as you limp weakly towards the clap clinic. It’s just the nature of the beast. The general rule as far as one night stands are concerned is that, if your experiences are beginning to too often resemble the latter scenario than the former, it might be time to take a break.

Anxiety: So am I allowed to have drunk sex or not?

Reality: If you’re worrying about whether or not you’re allowed to drink as far as Cosmo’s dating rules are concerned, the answer is: I haven’t got a fucking clue. On page 118 it says that you should never have a drunk shag because 29% of women got an STI after a night out drinking, but then on page 123 there’s a picture of a happy couple with the tagline ‘I asked him out…after 50 mojitos.’ The only advice that I can offer you, in my infinite wisdom, is that if you have two people whose combined mental and physical efforts are unable to result in a condom going on the right way round, then those two people have no business having sex anyway.

Anxiety: Do I need to get all Fifty Shades beneath the sheets?

Reality: If you’re really keen on getting into BDSM, then perhaps a little googling wouldn’t go amiss, something which was clearly beyond the journalist who came up with ‘the hottest bad girl tips we’ve ever printed’ (p.198). According to Cosmo, you need to ‘be all dominatrix-y’ by wearing ‘your leather jacket and nothing else’ then sitting down on a chair and instructing him to go down to you. Now listen, you and I both know that there are certain garments which look ridiculous out of context. Being naked but for socks, for example, is treading a well-known road towards the ridiculous. Likewise, parading about in nothing but a pair of culottes is unlikely to achieve the effect you were after (I mean, it’s a look, I suppose). The same can be said of the leather jacket. Looks lush over a little black dress, not so hot when the rest of you is in the buff. Unless you’re a seasoned leather jacket nudist (in which case, hi, Fonzie!) you’re likely to look extremely uncomfortable rather than chilled and ready to party. You could always try notching up the temperature by ‘in the shower, getting him to shave your legs for the ultimate submission.’ Mmmmm. Pretty sure the ultimate submission would be asking him to wipe your arse, but hey ho. Here’s a tip: wear what you want, and do what you feel comfortable with.

Anxiety: Are my ‘condiments criminal’?

Reality: Now listen. Everyone knows that LIGHT MAYONNAISE IS NOT REAL MAYONNAISE. Don’t let Cosmo tell you any different.

Anxiety: Will I ever find the secret to being happy?

Reality:  According to Gwen Stefani (pg. 213), one of the secrets to being happy is to wear make-up every day. Unfortunately for Gwen, this is clearly bullshit. The World Health Organisation estimates that depression will become the most common cause of health issues worldwide in the next 30 years. Meanwhile, the beauty industry is worth an estimated £15bn in the UK and is constantly growing. Your lipstick is not a cure that will provide you with instant happiness, I’m afraid. As for the actual cure, I’m no expert, but a women’s magazine amnesty would certainly help.

* Here is a picture of our therapist’s liberating couch. We found an advert for it in the back of Cosmo.