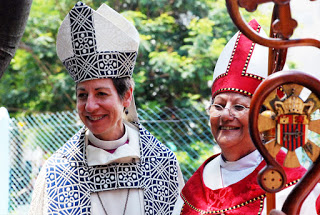 Yesterday, the synod of the Church of England voted against allowing women to be bishops (bishopesses? Bitchops?) For those of us who see the church as our family (stubborn, sometimes embarrassing, sometimes incredibly hard to live with, but nonetheless family), the results of this vote are akin to your one rowdy uncle falling into the cake and ruining your wedding day for everyone. It’s disappointing, it’s cringeworthy, and you’d all held your breath and believed that it wouldn’t actually happen this time around. I, like most members of the church, had hoped that the result of this vote would signal the beginning of the end of institutional misogyny in the Church of England. And unfortunately, I was wrong.
Just to put my frustration in perspective, this wasn’t a straightforward decision, or even one that seems particularly democratic. The motion was passed by the first two houses of the synod, but not by the final House of Laity. It needed a two-thirds majority to pass, and fell short by just six votes. All seems a bit George Bush and Florida to me, particularly when all but two – TWO – of the 44 dioceses of the Church of England, and three-quarters of the general Synod, had already voted strongly in favour. The hard-line minority opposition seems to have missed the fact that its Supreme Governor (er, yeah, the one over there in the crown) is, inescapably, a woman. The whole rulebook on what trumps what in C of E rock-paper-scissors has clearly been flung out of the stained glass window.
I’m not a theologian, a biblical scholar nor a expert on the C of E. But I am a woman, a feminist, and I have spent a lot of my life involved with churches. And a lot of us out there – not just the teenagers sporting rubber bracelets with the initials ‘WWJD’ stamped on them – still ask ourselves: ‘What would Jesus do?’ Therefore, I reckon there’s a bit of clearing up to do where the actual Bible’s position on women is concerned. Because there are a huge amount of passages in this context which are misread, mostly due to translation or (perhaps more likely) wilful misunderstanding.
The first example, and ones used most often by gender equality dissenters in the church, is Genesis, right after God makes Adam, when he says (English translation) “I’ll make a helper for him”.  Actually the word ‘helper’ has been mistranslated from the ancient Greek “ezer” which we don’t have a precise word for but means “one who surrounds, defends and nourishes” – a word which is only used elsewhere to describe God himself. He then makes it clear that they are both responsible custodians of all of creation. Funnily enough, in this light the whole thing has new meaning.
Later, in a letter to a church in Corinth, the apostle Paul says that ‘women’ should remain silent in church. There is reason to believe that this was directed at two women in particular, who according to historical accounts, were loud and disruptive. Actually, we know from elsewhere in the Bible and historical texts that Paul was very encouraging of women as leaders in these early churches – as was Jesus himself, who preached leadership equality between the genders, and was often chastised for it. If you’re in any doubt about such messages in the Bible, Galatians 3 also states: “There is neither Jew nor Greek, man nor woman, slave nor free – for you are all equal in Christ Jesus.” Boom.
The twisting of a message of inclusivity into its direct opposite by the vote against female equality this week has been hugely disappointing for those of us who had hoped that the Church of England was about to make the most positive progression it had in years. I don’t believe that God discriminates, or that whether women and men are as good as each other is a complex theological debate. Like most members of the church, I was shocked by the outcome of, er, Bishopsgate – and I think the issue is a no-brainer. By privileging the viewpoint of hardline minority groups, the decision threatens to turn the church into precisely what it fears becoming: irrelevant and unrepresentative.
The winds of change have been blowing hard across Britain of late, and a church that relies largely on sexist interpretations of our central text risks enacting its own undoing. The Bible includes a plethora of women who lead nations, advise kings, run businesses, save thousands of starving refugees and outwit evil dictators. And it’s time for the men at the top  in the big hats to realise that those women weren’t included by accident.
-RA

11 thoughts on “What Would Jesus Do?”