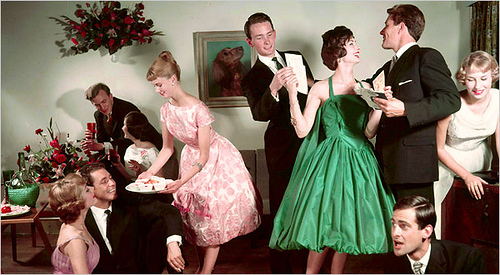 I woke up today just feeling so like, totally OVER female objectification (you know how it is). Then someone tweeted a link to a Sun article about Pixie Geldof (NSFW- tits), and the comments just made me want to do that thing, you know, where you’re SO MAD that you’re face doesn’t know which emotion to show, so you end up kind of angrysmiling while shaking your head, and then you make this noise – I think it’s called cryyelling? Either way my boyfriend hates it.
What’s horrible about many of the comments is that they point out some non-existent flaw (Pixie love, you look gorge babes) and then say: ‘your dad must be so proud.’ WTF? As though our dads should be walking around pleased as punch because we have slamming bodies. WE’RE NOT CATTLE (or chattel).
It’s like me saying sarcastic to all those Sun readers: ‘wow, your mum must be SO PROUD of your tiny nobs and your shrivelled little foreskins.’
In other words, it’s a little bit ‘ew’ (category: incest)
So yeah, I am feeling so over this right now, especially because, after that, I stumbled upon this festering turd courtesy of Glamour magazine: What your party outfit says about you (according to guys!)
Now, the ‘What your (insert thing here) says about you’ article format is basically the bread and butter of women’s magazines. As is the ‘fashion jury’ format in which you get a bunch of feckless twats giving their opinions on some poor woman’s sartorial choices. Note that the opposite rarely occurs in men’s magazines, probably because a significant proportion of the male population are still moseying around in bootcuts and ‘shit jeans, mate’ x 100 doesn’t really make for illuminating copy. Basically, these articles are some sexist bullshit right there, but just in case you were a teensy bit interested in what some American guys in their twenties thought about your fashion choices (if you aren’t then you should be, the Christmas party season is upon us, don’t you know), we’ve decided to share some excerpts, accompanied by our own feminist take on things. They don’t call us the fun police for nothing!
(Note how Glamour has obscured the faces of its victims to avoid making anything too personal)

Now, Kellan, there’s no need to be so bitchy. You’re sounding a hell of a lot like noted fashion photographer Nigel Barker. Are you telling me that were this lovely lady to walk up to you outside a nightclub and ask you for a light that you would say ‘be gone with you, sexy lady, and your interesting choice of outfit! The fact that you are wearing no trousers offends me!’ You wouldn’t, would you Kellan? In fact, you’d probably follow her home.

Taylor is digging this look so much, that he’d even allow the little lady in the picture sexual equality by deigning to do business with her! Only for a moment, though. After that he’ll be reinstating gender norms by insisting that he pay for all her drinks. Except maybe she doesn’t want your drink, Taylor. Maybe she likes girls, or is a Muslim, or thinks you’re a prick.

Come here, William, and sit down. We need to have a little chat. And stop looking at my tits. Now, listen William, and repeat after me: THIS WOMAN’S LEGS PROVE NOTHING EXCEPT THE FACT THAT HER LEGS ARE VERY LONG. THEY SAY NOTHING ABOUT HER ABILITY TO DRESS HERSELF (she could be blind, for example, or have problems with co-ordination) or HER MINDSET (she could have crushingly low self-esteem).

While I appreciate Jamie’s clever use of metaphor, this is categorically NOT what would happen if Johnny Cash shopped at Victoria’s Secret. Being as he is a dead celebrity, it’s probably that Mr.Cash’s unexpected presence at a mid-range American lingerie store would attract a significant amount of media attention. Then again, the teenage girls who shop at Victoria’s Secret would probably just assume he was someone’s dad who was looking a little peaky on his way to a funeral. Jamie, are you saying that this woman looks like a zombie country and western singer in drag? Is THAT what you’re saying?

5 thoughts on “What Your Party Outfit Says About You”