Ah, Christmas sex tips – aren’t they just in a special little category all of their own? Interspersed with the old stuff they’ve been peddling all year round (except now with added gingerbread and/or Santa hats) is a huge variety of festive puns, whether you’re referring euphemistically to his ‘stocking’, bringing back the 69 because ‘it’s the season of giving and receiving’, marketing some ‘toys’ for Santa’s ball-sack, or advertising a polyamorous lesbian three-way as ‘ho ho ho’. One particularly ambitious magazine last week did a ‘25 Days of Yuletide Sex’ board game, which included tips inspired by popular fiction throughout the year to really spice up the exit of 2012 (and, if you’re to believe the Mayans, the entire world.) The Fifty Shades of Grey tip was ‘Whack him friskily with a hairbrush and, if he likes it, carry on.’ Is this how you would like to potentially spend the apocalypse? Assault and ask later? Then stay away from the editorial board of Look, who might be more at home planning Halloween than something that’s supposed to be about candy canes and cuddles under the Christmas tree.
Once I saw the 25 days of Yuletide Sex, I became as hooked as a set of ‘naughty elf’ suspenders on Christmas bedroom tips. So now that I’ve got a veritable sleigh-full, I thought I’d bring the world a little Christmas cheer and share them with you, so long as you’re on the naughty list. Yes, the puns will be coming as hard and fast as your boyfriend in a quickie behind the wardrobe on Boxing Day while your parents aren’t looking. If that’s enough to make you spew yellow advocaat vomit all over your reindeer onesie, then you’re in the wrong place, cutie – go back to the Vicar of Dibley reruns and pretend you never saw any of the horror to come, before Christmas is officially ruined forever.
So, let’s begin with ‘edible panties’. Yeah, that’s a thing, and they’re often of the ‘candy necklace’ variety, which means an elastic string thong covered in spit and your sexual partner choking on small parts before you have to run for the Canesten Ultra as your Christmas bush lights up with thrush. These are being pushed as the latest thing to stick in ‘your man’s’ stocking in lieu of the more traditional box of chocolates, but no one seems to be entirely convinced. This article from SheKnows.com have it on good authority that the sweetie knickers will work a charm; a couple of tips later, they also suggest that you (verbatim quote): ‘Find the biggest and longest ribbon at your local gift shop and mummify yourself with it (in a sexy way, of course).’ Like, mummify? Really? Imagine your boyfriend walking in to your ribboned-up body, stiff as alabaster, while you call out sweet nothings in tones heavily muffled by the material. He walks in and finds your room filled with candles, a strong smell of formaldehyde, and your internal organs displayed around the bedroom in a jar. In a sexy way, of course. Merry Christmas!
The next top tip that SheKnows suggests is to ‘reward Santa for his hard work with milk, cookies and some Mrs Claus bedroom action’. There’s something really stomach-turning about the fact that they zeroed in on the milk and cookies here, rather than the whiskey. One might hope that if you really did come in to the bedroom with a tray of warm milk and cookies to feed your unsuspecting shag buddy, that might not be entirely conducive to a raging festive boner. And if it turns out that it is, then you might need a completely different conversation come 2013.
Away from what the ladies advise, AskMen have gone all ‘meta’ on us and written their own Christmas sex tips ‘for entertainment purposes only.’ In this, I have to take my hat off to them for the first couple – the idea of getting your girlfriend on board with teabagging if you use leftover red and green frosting from the Christmas cookies (with some red icing on the end of his knob for a ‘candy cane effect’) is pretty hilarious, but the final few end up pretty dark (imitate Santa going down the chimney by ‘giving her an anal pile driver’ in a position where it’s ‘not unusual for the drivee to pass out’. Right then. Someone needs a new boyfriend under the tree, immediately.) 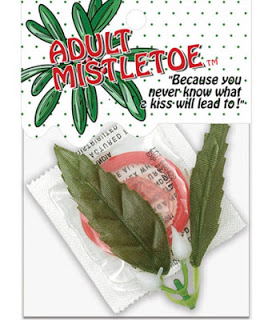