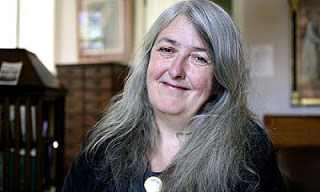 Poor Mary Beard. She went on Question Time and expressed the view that Eastern European migration had benefited some areas such as Boston in Lincolnshire, and that some of the stories about “floods” of people were ‘myths’.  In response, she was subjected to the most vicious, obscene, and highly threatening abuse. Whether or not she is right about immigration, and whether or not she is well-positioned to comment on the topic is irrelevant. Disagree with her all you like. That is your prerogative under a democracy, so long as you remain within the law. But what was striking about this wasn’t the strength of feeling on the part of those in the opposite camp – that is to be expected. What was striking was the obscenity and images of extreme sexual violence.
Now, men in the public eye suffer abuse. They are ridiculed for their personal appearance (Eric Pickles pie joke, anyone?), and abused for their supposed intellectual failings or their social position. They are accused of being fascists, Islamist sympathisers, part of a neocon conspiracy, part of a left-wing conspiracy (sometimes both at the same time, which makes one wonder how, if that kind of existential doublethink is going on, they could even function: ‘Should I boycott Tetley’s teabags for being an arm of the monster of globalisation, or support them as an example of a successful blue-blooded British business? I just don’t know! All I want is a cup of tea!’). They also suffer threats of violence. But they aren’t often threatened with anal or oral rape, or their sexual prowess questioned, or the state of their pubic hair pulled under social media review.
The abuse directed at women in the public eye is distinctive in that it is relentlessly personal (on their attractiveness and imagined sexual proclivities) and it is characterised by threats and imagery (verbal and actual) of sadistic sexual torture. And just as rape is about power, threatening rape or using rape imagery is about power too – it’s an attempt to silence. Mary Beard, with her ferocious intellect, apparently cavalier attitude towards attracting men through her looks, and unpopular (with social conservatives from both the Labour and Tory camps) opinions, is beyond the pale. She is an abominable threat to normal social conventions, and this probably means that she doesn’t trim her lady garden. How very dare she.
The ones who take exception to Beard in that particularly personal and sexualised way have taken a novel twist on Austen’s famous opening line: it is a truth universally acknowledged, that a clever woman in possession of a controversial opinion (or, as her so-called critics would have it, ‘Mary, Mary, quite clunge-hairy’) must be in want of a cock. And meanwhile, she has the audacity to keep talking without even gyrating against some sweaty dude in a hip hop video. Like, what gives? Does she not get who’s boss around here?
Mary Beard is no delicate flower. Academics routinely rip each other’s work to shreds with an acidity that would eat through concrete and make even Margaret Mountford quiver in its wake. But criticism of her opinion isn’t the issue. It’s the way in which this criticism manifested itself, and why.
Should we be worried? Are they just a slack-jawed minority? Yes, they are a minority – but there are plenty of dangerous minorities who are still worth tackling. And every time someone is attacked on the basis of who they are, rather than the opinions they hold, it’s incumbent on all of us as members of a freedom-loving democratic society to stand up and deny the haters the comfort of imagining they are the ‘silent majority’. They aren’t, and we should prove it.
By the way, Mary, if you happen to read this (which would make our year), Roald Dahl was right: thinking ugly thoughts always makes itself seen eventually. Those who disagree with your viewpoint should still fight for your right to say it without a deluge of sexist bullshit raining upon you. Meanwhile, I have absolute confidence in the fact that the people who speculated on the size of your vagina because of your political opinions are decidedly ugly, inside and out.
-LL

8 thoughts on “The Dissection of Mary Beard”