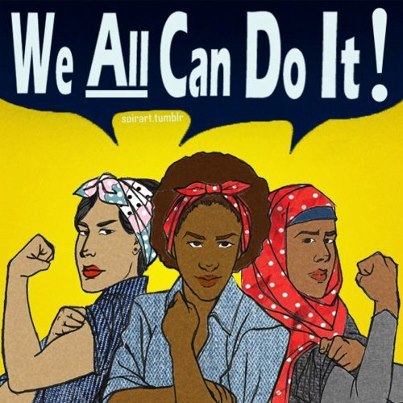 So you know you’re a feminist, but WHAT KIND? How can you live without further labelling and explanation? Some people will tell you that there are as many kinds of feminist as there are different kinds of people. But those people are talking pony. There are three kinds. Find your kind now!
How angry are you right now?
A. Absolutely fucking livid. My pizza was supposed to be here half an hour ago.
B. Medium. Why, what have you got?
C. I’m chill, bitch! Thanks to this frosty breakfast sauvignon…
Which of the following had the greatest impact on your feminist education?
A. Your Mum.
B. Your Mum’s Ms Magazine
C. Teen Mom
You’re a giant, standing over a giant bathtub. Camille Paglia is trying to climb up the plug chain. Germaine Greer has made a tiny dinghy out of the soap dish, and Caitlin Moran is losing her shit because she’s allergic to Matey. Who do you save first – and why?
A. You’d attempt to instigate a mass, non judgmental discourse with a loofah.
B. Perhaps you could introduce a tiny, waterproof John Waters to the water? You know, Female Trouble?
C. Save them? Not ‘til they’ve CHECKED THEIR PRIVILEGE!
When you caress your clitoris, which erotic images form in your mind?
A. The comments section of your CIF column. You can feel the blood rushing to your groin.
B. Ummm, Ryan Gosling? Because of that blog? He’s..allowed, right?
C. Jamie from Avaaz.org. There’s no way of making it stop. Even though you have no idea of their face or gender.
When was the last time you judged someone?
A. When they HAD THE AUDACITY TO SPEAK FOR ALL WOMANKIND!
B. You saw someone wearing taupe leggings and it looked like they had gone out with no trousers on. And anyway, the leggings were so tight that you could probably identify them by their labia in a police line up.
C. The person who was eyeballing you as you went tonsils deep with a Pret meatball wrap on the tube. It’s rude to stare, which is why you accidentally spilled marinara sauce on them
Which Girls character are you?
A. You are not answering that until everyone involved in making or ever enjoying any episode of Girls, ever, apologises for the ‘representation problem’.
B. Shosh! Definitely Shosh! Wait, Shosh is the hot one who marries Chris O’Dowd? OK, Hannah then.
C. You like the one who has aaaaaaaaall the shoooooooes.
Mostly As
CONGRATULATIONS! YOU ARE AN ANGRY FEMINIST!
No newfangled fancy feminism for you! You’re what we like to call a ‘heritatge’ feminist, focusing on the core values of misandry, misery and violent disagreement. It doesn’t matter what everyone else is doing, ‘cause they’re probably doing it wrong! Amirite? Things you don’t like include Starbucks, Sasha Grey, Park and Rides, body glitter, bacon perfume, thongs (sandal and underwear) and Pot Noodles. Things you do like include Margaret Cho. Oh, sorry, we’ve just heard that you’re not allowed to like Margaret Cho any more!
Mostly Bs
WELL DONE! YOU ARE A SEXY FEMINIST!
Well, don’t you just put the vagina into empowerment! I bet you’ve taught your local WI all sorts of things about feminism, through the medium of electro-burlesque. You all have rights, godammit! Hot lady rights!  Don’t forget that exercising your rights as a sexy feminist and constantly shopping for lingerie and dildos can be exhausting. Make sure you treat yourself to a relaxing bath. Light some candles, line up the oils and fire up that live video blog!
Mostly Cs
HURRAH! YOU ARE A LAZY FEMINIST!
Excellent news! You’re a …Jesus, this isn’t going to take much longer I promise. Turn Real Housewives off. Turn. It. Off. Well, mute it then. Your feminism will not make you sponge the hummus off the crotch of your jeans, or it will be bullshit. One day you might sign an e-petition, or learn about the history of suffrage from that song the mum sings in Mary Poppins. Or you’ll harvest the searing, angry energy that has been brewing since you watched Knocked Up for the fourth time and write a box office breaking black comedy about abortion.

3 thoughts on “Which Kind of Feminist Are You?”