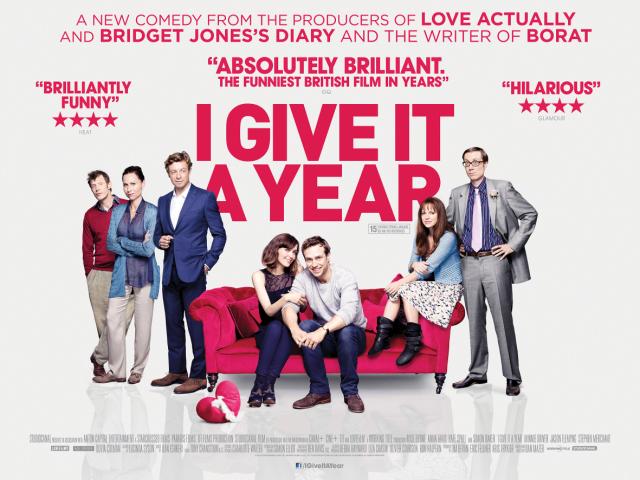 I desperately wanted to like this film. It’s an “anti-romcom” as director Dan Mazer at pains to tell us here, so I was prepared for something subversive, a little bit cleverer than those romantic films where I always tear up at the mention of the title. I scoffed in the cinema as the trailer for ‘Safe Haven’ came on. Contrived romantic bs, you can wait! I’m at the cinema with a big bag of M&Ms and an inquisitive mind, bitches.
Instead, (*big fat spoiler alert*) I was confronted with two unlikeable, arsey bores who end their marriage in favour of one-dimensional, saccharine romance with their one-true-loves (both American, both equally boring). Nat (Rose Byrne) is a career woman with an achingly postmodern (read: Cosmo via Glamour) view of how shit men are. She works at an ad agency, aka an office containing a couple of women doing their best Mad Men impressions and eating sushi.
Despite her professionalism (LOL) she ends up captivated by the borderline sexual harassment of client Guy (Simon Baker of Mentalist fame), a clichéd picture of creepiness. As for her equally boring hubby Josh (Rafe Spall)…why are we supposed to care if the marriage of this deluded layabout “writer” marriage is going to shit? He’s just a silly stereotype, a proto-Olly Murs. He ends up with Chloe (Anna Faris), a sweet girl who does loads of charity work but unfortunately we don’t really get to see what makes her tick because she’s too busy chasing around after this tit.
I don’t usually let films irritate me this much, but I think it’s the pretentious, pseudo-intellectual vibe of this one that really did it for me. An anti-romcom? But you’ve just repackaged that aforementioned contrived BS that we love, minus the laughs and plus an incomprehensible dose of cynicism?!
There’s a reason why the romcom exists. I crave the slushy (The Notebook), the whingey (Bridget Jones) and the overtly sexual (Sex And The City 2, I am looking at you). Many of the movies I save to the Sky box at every available opportunity (50 First Dates, The Holiday, Hitch, How To Lose A Guy In Ten Days, A Cinderella Story, The Ugly Truth, Legally Blonde etc. etc.) are vomit-inducing romcomedies and dramas, and I really couldn’t care less about critiquing them. They’re a Saturday night take-me-out-of-here-and-feed-me-Haagen-Daas pickup. They’re sickly sweet, happily-ever-after, Barbie and Ken crap. Anti-female? It’s ordinary women with ordinary lives who go and see these films, buy them off Amazon, sit on the sofa with single and coupled friends alike and keep the industry afloat…whether we then expect overblown romantic gestures and boyfriends who look like Gerard Butler is, I suppose, a reflection of our own ideals and intelligence.
I digress – it’s a genre that isn’t broken, so why exactly has Dan Mazer come along to, erm, fix it? More to the point, if he was trying to send a huge and important message about how flawed the relationships are in such films, why didn’t he do something radical? How about Nat telling Josh what an almighty prick he is and dumping him instead of being an uptight bitch who finds a newer model? Similarly, why did she allow Guy’s behaviour to get so out of hand in the workplace? Couldn’t they have just gone on a date or something? Some sushi perhaps? Oh no wait, they’ve just had a quickie in a doorway. Is this 2013 of 1913? As for Chloe, why on Earth did she decide to shack up with Josh, a guy who had previously royally-fucked-her-over-and-taken-a-chainsaw-to-her-heart and then married a “hotter” woman?
“I Give It A Year” is the perfect romcom for the Twitter era, or so we’re led to believe. Marriage is something disposable, a joke to scoff about in pointless therapy sessions (Olivia Colman is amazing as the therapist though, I should add), sans any real insight into the whys and hows of Nat and Josh’s relationship (interestingly the French title is “Mariage à L’Anglaise…let’s hope they don’t think we’re all so laissez-faire). Had your head filled with too much gushy Hollywood nonsense? Keep calm and find out what the real world is like over in Blighty! Or not. It’s a happy ending as the two new couples snog on the platform …but it’s far from subversive. Sure, Stephen Merchant told some bad jokes, and two shitty people got a divorce somewhere in there. But this was just a com, and a bad, regressive one at that. Hardly a classic in the making. I give I Give It a Year more like, a month, tops. I really need to find out when Safe Haven is out, like, now.
- HJD

3 thoughts on “I Give I Give It a Year Like a Month, Tops”