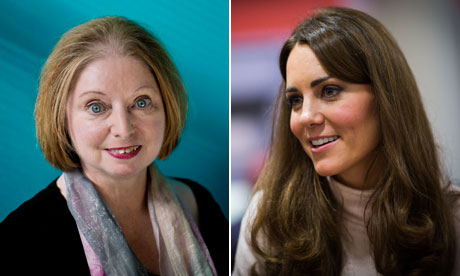 Once upon a time, there was a radiant Duchess. Everybody loved her. Her hair was so shiny. Her bump was so neatly tucked away beneath a flimsy Max Mara dress that kept it clearly visible. Her hands were so neatly cupped beneath it. She smiled. She laughed. She flicked at the shiny hair when a light breeze threatened to ruffle it. She dreamed of being a mother.
That’s not why everybody loves her, just to be clear. She is also an intelligent woman who has a degree and many important, insightful opinions. But her hair does just happen to be so very, very shiny.
There was also a snooty novelist. Until recently we knew her for her prizes, her hefty books, without much interest in who she really was. Until this week, when we suddenly hated her, and for the first time began to examine her face. Her body. She didn’t look like the radiant Duchess. Her hair wasn’t shiny. She was infertile. She dreamed of being thin.
Just to be clear. We don’t hate her because she is strange to look at, because she is childless, or even because she’s clever. We hate her because she hates the radiant Duchess. She is jealous and bitter, because she is not the fairest of them all.
And now the battle lines are drawn. The Duchess vs the Novelist. K-Middy vs H-Manbooker. Beauty vs the beast. How they must be spitting in fury, behind closed doors.
We love a celebrity war. We always have. As Mantel tried to tell us, so artfully and so stylishly, in an article which sat on the LRB website for nearly a week before anyone screamed about it, we’ve been constructing these fictionalised battles for centuries. ‘Women beware women is a teaching that never falls out of fashion,’ she wrote. Those who misread her will no doubt have seen that as a warning: for women, against women. It isn’t. It is the teaching, not the women, she is warning us against.
There is no Anne Boleyn, as we know her from the portrait which isn’t her. Victoria probably was amused, sometimes. There is no Kate Middleton, radiant, plastic or otherwise, as we know her from the same newspapers now rushing to her manufactured defence. There is no vicious, vengeful Hilary Mantel. ‘Her real self is hidden within the dramas into which we co-opt her,’ Mantel wrote of Anne Boleyn.
The cult of celebrity rests on the fiction that we know these people. Their biographies, interviews, photographs, are a mirror which reflects the truth about them. But the truth is, we have invented fairytales, that walk and talk and give interviews, whilst behind the scenes the real people get on with the business of being themselves.
The irony of comments like Louise Mensch’s, ‘Mantel has never met Kate, never spoken to her, but feels perfectly comfortable judging her character, “quirks” and her body’ alongside full-length pictures of the Radiant Duchess and ‘Grump vs. Bump’ headlines is breathtaking.
Mantel is well aware of how this all works. Of course she is. She’s a novelist. On seeing the Queen she wrote: ‘I passed my eyes over her as a cannibal views his dinner, my gaze sharp enough to pick the meat off her bones… I wanted to say: it’s nothing personal, it’s monarchy I’m staring at’. She knows the machine intimately, its falsehoods and its chronic lack of context; now, inevitably, it’s turned upon her.
We own these alter egos right down to their cuff buttons. They are our household gods. It’s a dangerous thing, to attack them. To poke at that veneer of plausibility and find it has no substance. Once upon a time, we called it blasphemy.
Of course this isn’t reserved for women – I remember Paxman, in the height of Sachsgate, demanding of Russell Brand why he felt he was entitled to leave that message on an elderly man’s answer machine. He replied ‘Because I had forgotten he was an elderly man. I thought I was calling up Manuel.’
We can be equally capable of fictionalising men, but the narratives of fairytale are most often reserved for women, because they rest on appearances. Because we still equate a woman’s value and personality with her looks, her breeding potential, no matter how many prizes she has won. The beautiful princess, the evil queen, the ugly sisters. The witch. Lacy, sexy in stockings on page three, who reads Camus and dreams of being a surgeon. Ho, ho.
Needless to say, in the last few days Twitter has been awash with instructions for Hilary Mantel to look at herself in a mirror. The Mail informed us of the irrelevance that ‘Mantel’s treatment (for endometriosis) which included surgery, removing her womb, leaving her infertile, caused her to gain four stone’. That isn’t part of anyone’s fairytale.
But let’s be very clear: none of this is real. Kate’s perfection, Hilary’s venom, our collective outrage, the intellectual snobbery – it’s all a fiction. Their real selves are hidden, inevitably, infuriatingly.
What has really happened is that a writer has written an article. It’s a beautiful article about how we don’t really know the celebrity figures we think we know. We’ve never met them. We know their powerful alter egos, and we try to shoot them down at our peril. You can read it here.
That much, at least, is fact.
-SD

11 thoughts on “Mantel vs Middleton: Bring Up The Bodies”