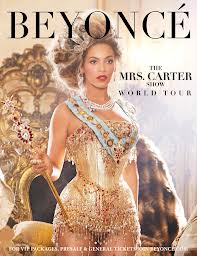 I genuinely think I would like to be Beyoncé more than anyone else in the world. I would love to be able to sing and dance, and run very fast in high heels. I would like to be married to Jay-Z and be friends with Michelle Obama. I think I would enjoy having cause to wear hotpants on a regular basis. I fail to see how being Beyoncé could be anything other than brilliant fun.
The difficulty is, it’s hard to reconcile a love of Beyoncé with feminism. I’m sure I could construct an argument for her as a feminist icon, including the words ‘success,’ ‘money’ and ‘expressions of sexuality’. But I know in my heart that if some kind of feminist goddess appeared holding a dossier of Destiny’s Child lyrics with highlighted phrases –  ‘when you come home late, tap me on the shoulder, I’ll roll over/Baby, you heard me, I’m here to serve you’, perhaps, or ‘a bad-performing, non-fulfilling woman drives a man away’ – I’d find it difficult to justify myself. If they brought up the fact that she spends most of her working life semi-naked (as compared to most of the men in the same field) or that Jay-Z, her future husband, sets fire to a car she is sitting in in the Crazy in Love video, I know I’d be in trouble. Best not to think about it too hard. Continue with my double-life, perfecting my ‘body ripple’ and reading The Whole Woman.
But now Beyoncé has launched ‘The Mrs Carter Show’, a tour under her married name, and I feel I cannot ignore it any longer.
My first response was one of disappointment. ‘Come on, Beyoncé, ’ I said, in one of our many imaginary conversations. ‘Once it was all ‘independent women’, now you’re urging us to ‘put a ring on it’ and taking your husband’s name! Lip synch all you want, but please don’t do this to me.’ The concept of the name-change makes me instinctively uncomfortable, however intolerant that may sound. I find it hard to make sense of a society that recognises phrases like ‘making a name for oneself’ and ‘not in my name’, and then expects women not to attach any significance to theirs. I am suspicious of a tradition that served us well when women didn’t need to be identified by anything other than who they were married to. I know that if I changed my name, I would feel that everything I had achieved, as insignificant as it all may be, was being erased. And it sounds like a lot of paperwork, and some of my favourite principles are those that combine nicely with laziness.
But then, my life is not really very similar to Beyoncé’s, however much I would like it to be otherwise. She clearly finds that different identities allow her to do what she does well (‘I Am Sasha Fierce’) whereas I think in my line of work, an alter-ego would be confusing for everyone. I have a relatively straightforward relationship with my father in that he was not once my manager and I have not written a song expressing the wish that my husband and unborn son be ‘like my daddy’, so I don’t mind keeping my family name. Beyoncé doesn’t have to worry about her past achievements being erased by the Mrs Carter Show, because, really, that isn’t very likely to happen.
Frankly, I have absolutely no idea what Beyoncé is trying to say by announcing a world tour using her married name while dressed as a queen in her underwear with some kind of terrifying, prancing DJ/court jester. I’m assuming there is some sort of plan: an additional identity, one more reinvention. But truthfully, one of the things I love about her is the fact that she looks like she’s doing whatever the hell she feels like, however much of an illusion that may be and with all the contradictions inherent in it. Maybe Beyoncé is showing us that a name change can be exciting and revitalising, and necessitate wearing a diamanté crown. While I agree with Grace Dent that taking your husband’s name is unutterably depressing when it’s ‘just what you do’, maybe Beyoncé is showing us what it can be if it’s a considered choice. It certainly wouldn’t work for me, but I can’t rule out it working for others. Maybe she is showing me how to be a more open-minded, more tolerant feminist. Maybe there is hope for our relationship after all.
-KMB

14 thoughts on “Tell Me What You Think About B”