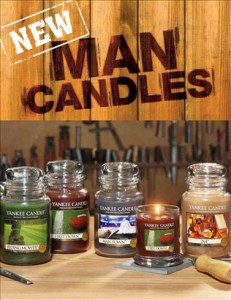 Fire. It’s a man thing isn’t it? Right? Guys? It’s men lording it over a BBQ, men overseeing the local bonfire on the 5th of November, and men poking dwindling flames with a big stick. Possibly while naked girls dance around it. But! But but but. Hang on a minute. Define fire for me, please there, squire. Because if we’re talking big, bombastic blazing flames, then it’s the domain of men. That’s the general consensus, that’s the rule. If we’re talking candles, though, then that’s for girls innit? Especially the airy fairy floral-scented things that you can buy for your mum or your little sister. Testosterone and lavender flavoured wax are a lethal combination, never brought together lest the entire world implode.
At least, that’s what Yankee Candle, the mecca for fine-smelling homes, would have you believe as the brand has introduced a collection that, by its definition, sets itself apart from its feminine predecessors. Behold, the Man Candles!
Now, I have to admit, I am a big fan of Yankee Candle usually. I’m particularly partial to the Strawberry Buttercream scent, for it is ‘good enough to eat’, yo. But this Man Candle range has really got me feeling bad for the guys. I have never understood why products have to be marketed depending on gender, and I have spent hours reading previous Vagenda features about girl-only pens and female chocolate with some bitter disappointment at the lack of imagination of most of our marketers.
Across the pond, there is actually a website that makes it its business to send up the stereotypical girliness of candles, though it all seems to have a cheeky edge. With products named Cupid and the Whore, you’d be forgiven for accidentally setting off your OMG MISOGYNY KLAXON prematurely, while actually the Grumpy Girl Candle & Bath is a massive piss-take. Its candy-coloured pages are filled with rosy pink things named Sock Monkey Fart Candles, and is a smart reminder that some things don’t need to be gender-specific. Monkeys and farts in particular.
But once I started looking out for how people are targeting the menz, I couldn’t stop. Strange sexist advertising has made an appearance elsewhere this week, where over in the States, the latest advert for Dove Men+Care is carrying the message to ‘end the face torture’ for men. Depicting our hero on a rollercoaster, being poked by a child and pelted with snowballs, the advert is meant to be a battle cry for blokes who never look after their skin. Now, I can see the message they are trying to drive home here, but since when do rollercoasters demand a penis before you can get on this ride? Rob Candelino, vice president of Unilever skin care, then cued the most underwhelming press release quote in the world, with: “The point is that you put your face through a lot and you are unknowingly doing damage to your face…We are setting out to get more men into the routine so they can enjoy the benefits like women have for generations.” Don’t get me wrong – I’m all for people looking after their skin – but what is with Candelino’s comment? How unoriginal! I’m a child of the 80s but I’m fairly sure men were moisturising their skin back when everyone though CK One was the only fragrance to wear and Craig David was the height of cool. Get with the programme, granddad.
What of the benefits that women have had in the world of skincare to which Candelino refers? Is it the patronising adverts that tell us Olay fights the ‘seven signs’ of ageing (none of which, weirdly, included ‘increased irritability’, ‘a slippery slope towards conservativism’, or ‘the use of the phrase “Back when young people had respect”‘?) Or the opportunity for us to ‘get the London look’, a fluffy line that means very little to a woman in Leeds (seriously Rimmel, tell us please what the London look is, as all I’m getting so far is a load of eyeshadow palettes in the shape of a Union Jack. Is it somehow to do with nationalism?)
We’re all used to two rigidly defined genders being stuck into little boxes by advertisers – and to some extent, I get it. I understand that you have to make shortcuts to get a message across in a 30 second advert, and some of those shortcuts are going to be based on the million other shortcuts that everyone else has taken before. I understand that money-grabbing in advertising has almost rendered the international imagination obsolete. But this continued insistence on the ‘men are from Mars, women are from Venus’ mantra gets old, fast, when in reality I know very few women who have a rigorous skincare routine – unless a quick swipe with a baby wipe counts – and very few men who can stoke the fire in the house I share. Seriously, would it kill them to check if the wood they’re using is soggy first? Jeez!
Now, excuse me while I go light my cupcake-scented candle and check my face for wrinkles, while wrapped in a Union Jack. After all, I am a lady.

3 thoughts on “The Trouble With Man Candles”