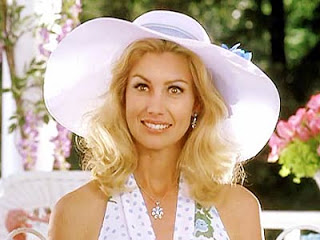 I’m not a fucking Stepford Wife
Readers of this site are likely to be familiar with that taunting quasi-catcall: “cheer up love, it might never happen”, or one of its ‘hilarious’ variants. It’s happened to me a lot over the years, and until I started using social networking sites like Twitter, I thought it might be something personal. I guessed that this perhaps owed to my natural bitchface, which makes me look as if I’m perpetually imagining Donald Trump naked on a fur rug.
Alas, it transpires that this is not a problem confined to the misanthropic and moody. I’ve heard many, many women discuss the irritation of being pestered in the street by men seemingly determined to make the female population happier and smilier. Only, it’s not really about genuine female satisfaction; if it was, Cake and Cunnilingus Day would be Steak and Blowjob Day’s female counterpart. No. It’s about power.
A man telling a woman to “cheer up” or “smile” is not a genuine, heartfelt wish; these people couldn’t care less if you’re actually happy, because if they did, they’d just leave you the fuck alone. They merely wish to remind you that your body is not your own. Your face does not really belong to you; in reality, it is a performance to be played purely for their benefit. They have granted you the privilege of their audience, and, like in that bad dream where you’re naked in front of your colleagues on stage, you have forgotten your lines. At the very least, this behaviour is intended to let you know that you are under their surveillance; as a woman, you are public property, and you’re owned by men. I mean, it’s not like anyone ever says it to bloody Morrissey, is it?
This last statement is doubly true for Kristen Stewart, Twilight doyenne and world famous scowler. As a celebrity, her whole existence is public property and thus appropriate for endless intrusions and dissections. And, aside from her relationship with Robert Pattinson, the most popular topic for these gory dissections is her lack of smiling.
Stewart is endlessly mocked for her seemingly wilful absence of cookie-cutter tooth-baring. When she does smile, headlines shout the news out as if she were a Nobel Laureate discovering the meaning of life. A few I found when I Googled “Kristen Stewart smile”: “Kristen Stewart caught with elusive grin on her face”, “Kristen Stewart gives a rare smile”. I also found a number of ‘hilarious’ ‘humour’ blogs with features like “The 22 Times Kristen Stewart Smiled In 2012”. Funnily enough, I couldn’t find any similar articles about her paramour, Robert Pattinson, who I can only imagine is described as “sexy” and “brooding” rather than “moody”.
So, what does this tell us, aside from the fact that a woman with 25 cameras in her face at all times may not feel like grinning her head off? It tells us that women are, still, seen as ornamental (and if you don’t believe me then check out what the editor of Esquire’s been saying). We are expected, not only in the limelight, but in our everyday lives, to be pleasing to men. We must play the role of the simpering wife, the smiling and vacuous airhead, devoid of thought.
When going about our daily business, we haven’t the privilege to delve into our inner lives, to think of something sad, or maybe just of something innocuous; whether we’ve got enough clean pants to last the week, or if it’s normal to fancy Phil Jupitus. We have to be on guard, grinning like a creepy Disney animatronic, a stunted mixture of Playboy Bunny and Stepford Wife.
On this occasion, the microcosm of Hollywood once again mirrors the experience of everyday women. Although Stewart and other actresses may be scrutinised in a more explicit and literal sense, there’s no getting away from the fact that we, too, are scrutinised. We, too, are expected to play a certain role, and to accept it wordlessly and thoughtlessly.
Whether deliberate or not, Kristen Stewart is rebelling from the feminine mould occupied by so many of her forebears and contemporaries. She has, unknowingly, raised the challenging notion that smiling (or, indeed, any behaviour exhibited by a woman) is not actually obligatory. The fact she is repeatedly mocked and attacked for this digression proves that there is, still, A Way We Should Be as women. God help us if we don’t like it.
We might not have cameras shoved in our faces, our jiggly bits garishly circled in magazines or jizzing penises drawn on photos of us by low-rent gossip bloggers, but we are examined in a much more insidious way. We are all measured against an invisible benchmark of what it means to be female; and of course it’s all bared, shiny teeth, Predator style, and heaving bosoms, fainting Victorian rose style. Kristen Stewart’s failure to conform may seem like a tiny and insignificant notion, but it does a significantly good job at pissing people off. I hope she doesn’t start smiling any time soon.
- ER

15 thoughts on “‘Cheer Up Love, It Might Never Happen’ Can Just Fuck Off”