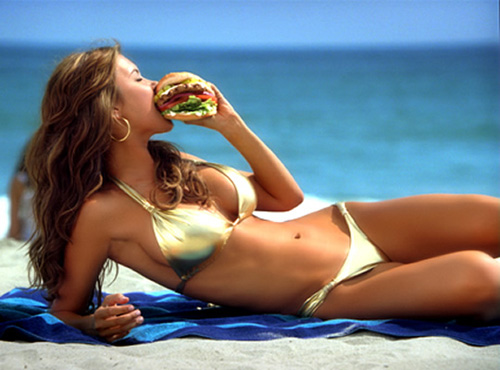 I recently had the misfortune of catching Salt on the TV. When it became obvious that Angelina Jolie’s CIA-agent-on-the-run wasn’t the most believable character – in part due to gravity defying lorry hopping stunts, but largely because halfway in she somehow dyes her peroxide blonde tresses black without turning them purple first – I turned to alternative entertainment. Twitter.
‘Nothing feminine about Angelina Jolie! Far too thin!’ screeched @JazzyFizzle4man. ‘As if Angelina Jolie can take on these guys. She is a twig. I’m calling BS,’ chortled @lauramcglone. Just as I was starting to despair over AJ’s boneability, @Taff_Hollywood hit my newsfeed with: ‘Regardless of what anyone says, I would still do Angelina Jolie.’ PHEW.
With a female lead voted sexiest woman alive more times than OK! Magazine has printed photos of Kerry Katona’s arse, sadly it’s not shocking the film’s plot was sidelined for debate on her waistline. What was dire, however, was how readily viewers aired their disgust at her lean figure. Jolie was looking a little on the gaunt side, for sure, but after training two hours a day three or four times a week for the role, she was never going to be popping out of her pencil skirt. It’s not the first time the actress has been lambasted for her size, but I have to wonder if she was tipping the other end of the scales would we be so quick to tell her that she was overweight.
Because there’s something we seem to forget when we talk about the female form. Pointing out excess weight is cruel and unnecessary, yes? So is skinny-shaming.
I’ve never been a big girl, but it’s not through choice. I’m certainly not extremely thin, but in my experience people tend to assume that a slighter frame comes only from a diet of mung beans and compulsive spin classes. I find this insulting because I love food. I love food so much that if I’m not fed every two hours I lose the ability to form sentences. I refuse to go to restaurants on first dates because I know the excitement of impending culinary magic will distract me from the guy I’m there with. “I love you more than cheese” is a platitude which carries immeasurable weight coming from me, because, seriously…CHEESE. The implication that I’d curtail this love affair for vanity irritates me more than you’ll ever know.
Glorifying being skinny and fetishising thinness is never OK. I can’t even begin to describe how much work the fashion industry and media-at-large have to do before they stop peddling unrealistic body images. But not everyone under a size 10 becomes an automatic role model for thinspiration. It is possible to consume your body mass in mince pies now and again, and still naturally err on the slender side – and there’s a real tendency to underestimate how hurtful being called skinny is when you’re demonstrably lacking in so-called ‘feminine’ curves.
With this in mind, I’ve compiled a list of incidents occurring at various points in my life, that you should never mirror if you want to avoid being a dick to someone that’s naturally smaller than you. DO NOT:

So let’s all simmer down and make room for the petite amongst us (they only need a little bit of room) without pursing our lips or murmuring cruelly about ‘real women’. It ain’t good form, ladies – and in this world of oft-celebrated diversity, we can afford to remove that last barrier of acceptable prejudice.
-CS

33 thoughts on “Skinny-Shaming and the Mung Bean Myth”