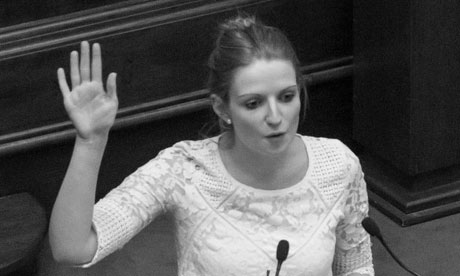 Two girls from Cambridge University recently complained about sexist heckling at a Glasgow University Union debate, which was so severe that Cambridge vowed never to send delegates again. Gerald Warner’s piece in the Spectator suggests that they should shrug it off like proper women. All quotations below are taken directly from Warner’s article, ‘IF CAMBRIDGE’S DEBATING GIRLS CAN’T STAND THE HEAT, THEY SHOULD STAY OUT OF GLASGOW KITCHENS’.
Calling all Deb8ting Gurlz (that’s right; y’all just got commodified). Certified equality guru Gerald Warner – for it is he – has set a progressive tone by lamenting your graceful presence in a prestigious kitchen. Makes a change, you say. But wait! Said kitchen is not of the usual variety, for this is the kitchen of debate, and it issues food for thought: today’s special is a generous helping of political disqualification, with an accompanying dollop of endorsement for those ‘well-poised women’ who so admirably ‘laugh off the schoolboy chauvinism of male adolescents’ (KATE MIDDLETON WOULD HAVE JUST LAUGHED). For wherein lays the fault? ‘Tis not with the baying juveniles of Glasgow’s debating club, but with the female speakers, ladies and gentlemen! And ladies in particular; take note, girls, because yet again – says Mr. Warner – you are entirely to blame.
And let’s face it. You uppity-debatey women just won’t do yourselves any favours! That aversion to banter, that characteristic recourse to ‘feminist rhetoric’ (perish the thought); it hardly recommends you for inclusion at the most prestigious levels of argument and exchange, now, does it? The point is this: a ‘health-and-safety, equality-and-diversity, cellophane-coated culture’ is ‘spreading its Stalinist [yep, Stalinist] tentacles everywhere’, and it is this culture that explains the hysterical reactions of ‘sheltered’ female debaters who deride allegedly sexist heckling. What have the complainants got to moan about, anyway? After all, they’re both quite fit! The zenith of girlhood! According to Warner, ‘photographs of the two finalists do not suggest they have anything to fear from assessment of their looks’; well, that’s fine then. Glad we’ve cleared things up. Cheers Gerald. Thanks for taking the time to assess these beautiful rebels. No doubt you’ve studied them closely, perhaps for hours, before coming up with a judgment that has really added to human discourse. You’ve rendered a great service. As have the complainants, by looking so nice and by catching your eye.
There’s more – Warner offers an observation that is akin to that of the racist football fan who claims to value the black players in his club for their perceived athletic prowess, but who simultaneously derides the presence of non-white players in opposing teams as an undesirable aberration. Glasgow University’s renowned union has apparently hosted a ‘number of women speakers who have received uproarious applause’ (bless them). They’re fine. They roll with the banter. Sometimes they even offer ‘funny put-downs’ to silence a cheeky bit of casual, well-intentioned misogyny, and are accordingly commended with a ‘rapturous’ reaction (one can only assume that this reaction is a grateful, sigh-of-relief reward from the union floor, designed especially for women who choose to laugh and not to sue).
The problem is with those women who have the temerity to transgress, to resist. We even get a sort of knowing, wink-wink nudge-nudge joke that is specifically aimed at Warner’s proper women, the little darlings; rowdy male criticism of the clothes worn by female speakers is said to have ‘usurped the prerogative of the women members of the audience who could have been relied upon to execute a far more informed and incisive hatchet job’. Oh, ha ha, right on, Gerald! Women and their sartorial expertise. Did anyone actually engage with their arguments, or were the clothes too loud?
Doesn’t matter; they were heckled, so you wouldn’t have been able to hear anyway.
-TPHB

7 thoughts on “The Penis Perspective: Women In Debating”