Since I had some free time between yelling ‘I’M TRYING TO WRITE A FUCKING BOOK’ at my boyfriend and howling at the full-moon, I thought I’d have a look at Cosmo US’ exhaustive and impeccably researched treatise on one night stands. Up until I met the old ball and chain, I was a bit of a one night stand aficionado (though not as much as my bestie, who can, pants-in-pocket, vacate a still-sleeping guy’s hotel room in under thirty seconds and only left her phone behind once), so I thought I’d be the right person for this particular bullshit-detecting job. And my giddy aunt, is there some bullshit. 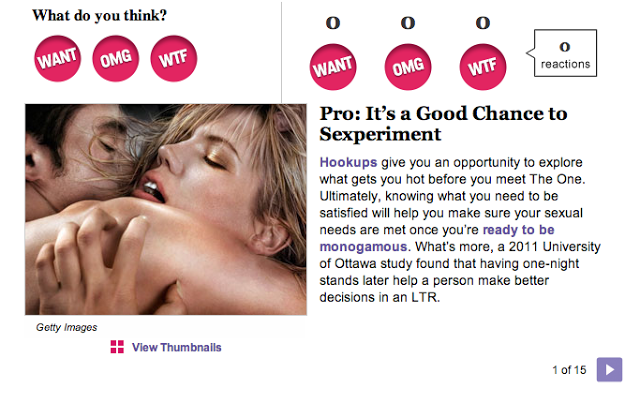 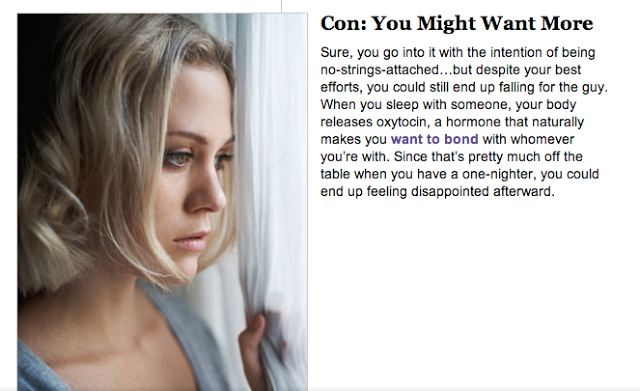 Damn insurmountable ladyhormones, making me want more. Despite being an intelligent, evolved human being, I just can’t fight that oxytocin. Except, you TOTALLY CAN. Take it from someone who has been with some true undesirables, you can’t actually be attracted to someone to the point that you want them to be your long term partner without your consent. This cuddle hormone stuff has foundations in science. AS DOES the immediate impact a man in red trousers saying ‘I really admire the steps the coalition’s been making in terms of social mobility’ while strumming Lady in Red on the guitar can have on your ladyboner (namely: killing it dead). 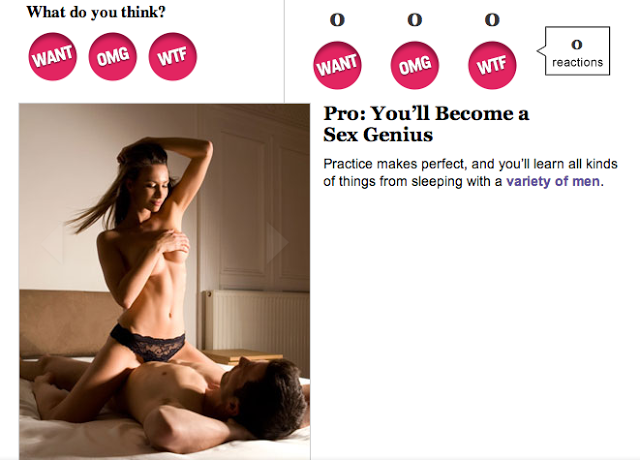 It’s true: you will learn all kind of things. You’ll learn how to create a stylish outfit from a combination of male clothing items. You’ll learn how to change a number in your phonebook to ‘DO NOT PICK UP’. You’ll learn how trying to shave your bikini line when you can’t see straight always almost results in a lopsided vagina and that filling it back in with eyebrow pencil just makes it look like you’ve pooed yourself forwards, and you’ll learn that the morning after pill tastes particularly delicious when taken in combination with Lucozade and a Richmond Superking (heads up: you also get Boots advantage points)
Also, what, pray tell, is a ‘sex genius’? Surely there are only a finite number of ways that you can insert a penis or tongue into an orifice and mastering them all is in no way on a par to locating the God Particle. Or did I miss that issue of Cosmo and the Higgs Boson is actually located up ‘your man’s anus? 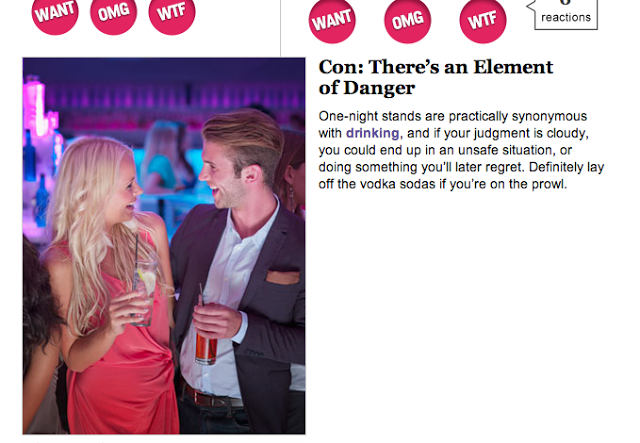 I mean, yeah there is. Which is why you take them back to yours, duh. My preferred tactic when a friend would say, on a night out, ‘do you mind if I leave with him?’ would be to ask for full details of his credentials including his phone number, address and place of work before letting them lose on each other with a caveat that, if she’s not back by an appointed time, I WILL be calling the police and her mum. But that’s just the kind of friend I am. Also: drunk sex is fun. 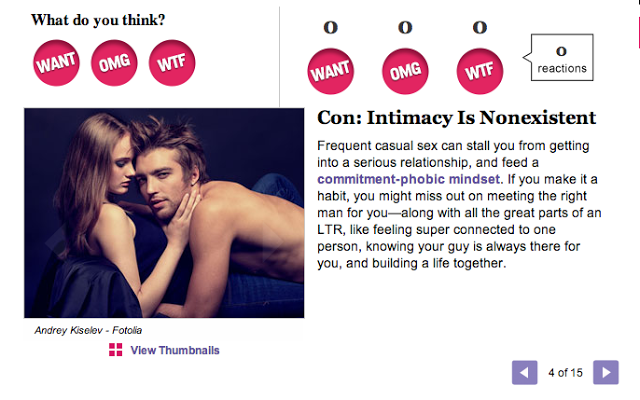 Again, this serious relationship business. Cosmo is OBSESSED. Can you imagine FHM saying ‘if you make casual sex a habit, you may end up missing out on the right girl for you’? Because I really, really can’t. 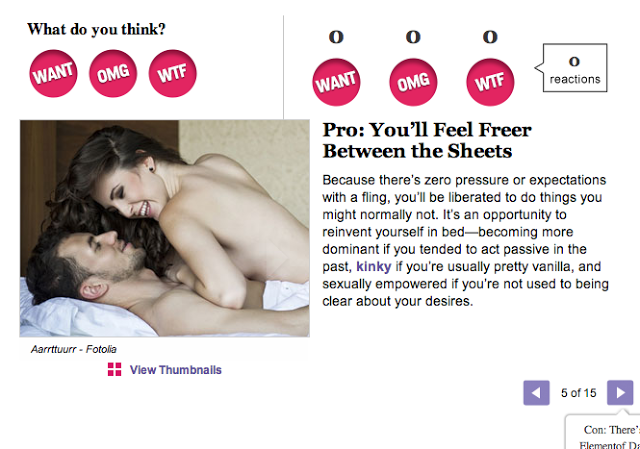 It’s true: you will. MDMA does that to you. 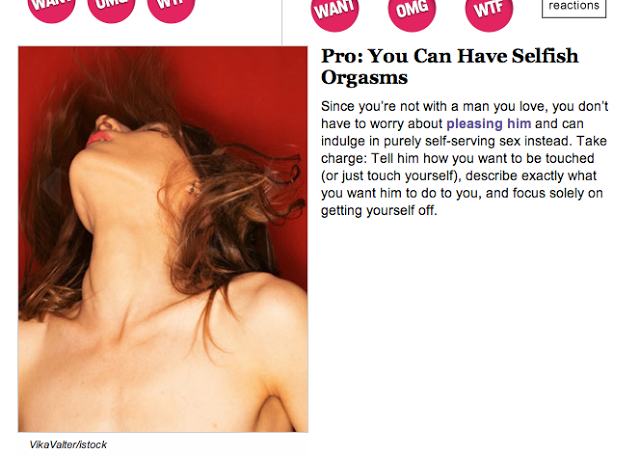 I mean, you don’t HAVE to worry about pleasing him, but it will make you a terrible lay, and person. 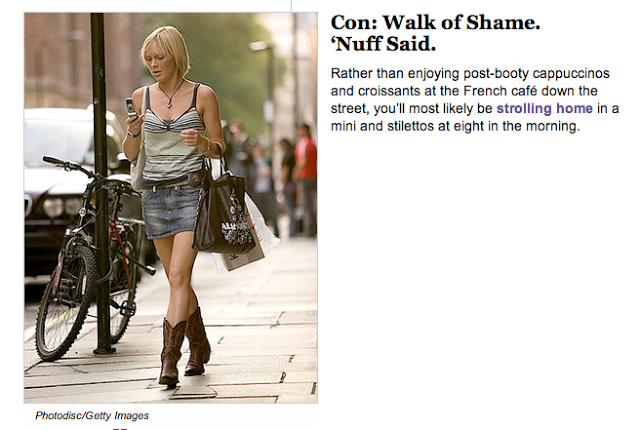 I LOVE the walk of shame. Not only do you have plenty of time to make phonecalls to all your mates (‘so, I finally did that rimming thing you love so much’) but you also get to smirk in a superior fashion at anyone who dares look as though they might be questioning why you’re sporting a jewel coloured halterneck satin number and a man’s dinner jacket at 8am on a Tuesday. Then, when you get home, you can add him to your list while eating a large sized stuff crust pizza because, hangover, and spend the rest of the night trolling his ‘so you took it, yeah?’ text messages with stuff like ‘Nah, I just thought I’d see how it panned out’. Best day ever.

6 thoughts on “The Pros and Cons of One Night Stands”